United States President Joe Biden took steps on Thursday to get more Americans health insurance in the middle of the raging coronavirus pandemic, following up on his campaign pledge to push the country towards coverage for all and to support women’s reproductive rights at home and abroad.

The White House said Biden signed an executive order reopening the HealthCare.gov markets, something his predecessor, Donald Trump, refused to do. He also took action aimed at reversing other Trump administration policies, including curbs on abortion counselling.

Biden described the two executive orders as “undoing the damage Trump has done”.

“There’s nothing new that we’re doing here, other than restoring the Affordable Care Act and Medicaid to the way that it was before Trump became president,” Biden said.

Biden has promised to build on former President Barack Obama’s health law to achieve his goal of health insurance coverage for all Americans, rejecting the single-payer, public system that Senator Bernie Sanders pushed for in his “Medicare for All” proposal. But to do that, he would need congressional approval, and opposition to the health law still runs deep among Republicans.

In the US, healthcare is not nationalised, and people rely on private insurance, government programmes – such as Medicare for the elderly and Medicaid for some people with low incomes – to pay for the highest medical costs in the world.

For the uninsured or underinsured in the US, medical bills can cause serious financial hardship and in many cases bankruptcies. Biden calls healthcare a “personal” issue and campaigned to make healthcare affordable for all Americans.

The most concrete short-term effect of Biden’s executive orders will come from reopening HealthCare.gov insurance markets as coverage has shrunk in the economic turmoil of the coronavirus pandemic. That new three-month “special enrollment period” could begin as soon as February 15, according to a White House summary.

Created under the Obama-era Affordable Care Act, also called “Obamacare”, the marketplaces offer taxpayer-subsidised coverage regardless of a person’s medical history, or pre-existing conditions, including COVID-19.

Biden will also immediately reverse a federal policy that bars taxpayer funding for international healthcare non-profits offering abortion counselling or referrals. Known as the Mexico City Policy, it can get switched on or off depending on whether Democrats or Republicans control the White House.

Other directives that Biden plans to issue Thursday could take months to carry out. Among them, he will instruct the Department of Health and Human Services to:

The abortion-related actions will bring Biden immediate praise from women’s rights groups, as well as condemnation from social and religious conservatives. Under President Trump, abortion opponents got free rein to try to rewrite federal policy, and now the political pendulum is swinging back.

Biden also campaigned on repealing longstanding federal prohibitions against taxpayer funding for abortion, but a change of that magnitude to a group of laws known as the Hyde Amendment would require congressional approval.

The regulatory changes Biden has asked federal health officials to undertake are not likely to happen overnight because hastily written rules are more easily overturned in court, as the Trump administration found out. Time and again, federal judges ruled that Trump officials ran roughshod over legal requirements for regulators, such as demonstrating that they have considered all sides of an issue.

Although the number of uninsured Americans has grown because of job losses in the coronavirus economy, the Trump administration resisted calls to reopen HealthCare.gov. Failure to repeal and replace Obamacare as he repeatedly pledged to do was one of the former president’s most bitter disappointments. His administration continued trying to find ways to limit the programme or unravel it entirely. A Supreme Court decision on Trump’s final legal challenge to the Affordable Care Act is expected this year.

The Obama-era healthcare law covers more than 23 million people through a mix of subsidised private insurance sold in all states, and expanded Medicaid adopted by 38 states, with Southern states being the major exception. Coverage is available to people who do not have job-based health insurance, with the Medicaid expansion geared to those with low incomes.

Of some 28 million uninsured Americans before the pandemic, more than 16 million were eligible for some form of subsidised coverage through the health law, estimates the non-partisan Kaiser Family Foundation.

Experts agree that the number of uninsured people has risen because of layoffs in the coronavirus economy, perhaps by five million to 10 million, but authoritative estimates await government studies due later this year.
Source: Al Jazeera and news agencies 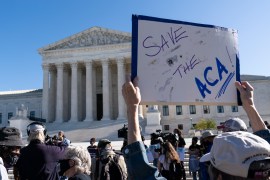 Obamacare may not be in peril, US Supreme Court justices suggest

Two of the court’s conservatives suggest that the health care law will survive, even if one part of it is struck down. 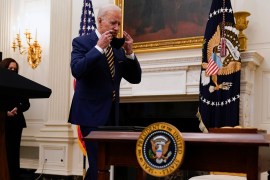 Biden is expected to sign an executive order that makes it easier for people to enrol in subsidised healthcare plans. 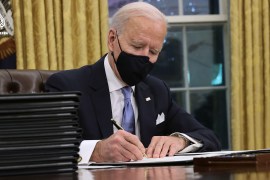 Within hours of taking office, US President Joe Biden signed a series of executive orders. 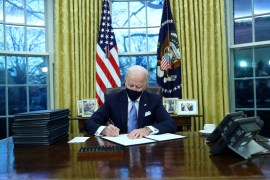 Joe Biden: What could his first 100 days in office bring?

Newly sworn-in US President Joe Biden signed more than a dozen executive orders on his first day on the job.