Nearly all Senate Republicans have voted in favour of an effort to dismiss Donald Trump’s second impeachment trial, in a show of party unity that some cited as a clear sign the former US president will not be convicted of inciting insurrection at the Capitol.

Republican Senator Rand Paul tabled a motion on Tuesday objecting to the trial on the grounds that the constitution of the United States does not provide for the impeachment of former presidents. Trump left office last Wednesday.

The Democratic-led Senate blocked the motion in a 55-45 vote. Only five Republican legislators joined Democrats to reject the move, far short of the 17 Republicans who would need to vote to convict Trump on an impeachment charge that he incited the deadly siege on the Capitol on January 6.

While the Republicans did not succeed in ending the trial before it began, the test vote made clear that Trump still has enormous sway over his party as he becomes the first former president to be tried for impeachment in the US.

“It’s one of the few times in Washington where a loss is actually a victory,” Paul later told reporters.

“Forty-five votes means the impeachment trial is dead on arrival.”

“It makes no sense whatsoever that a president, or any official, could commit a heinous crime against our country and then defeat Congress’ impeachment powers – and avoid a vote on disqualification – by simply resigning, or by waiting to commit that offence until their last few weeks in office,” Schumer said on the Senate floor.

Tuesday’s vote means the trial on Trump’s impeachment will begin as scheduled during the week of February 8. The House impeached Trump on January 13 on a single charge of “incitement of insurrection” making him the first president in US history to be impeached twice.

Some Republican senators who backed Paul’s motion said their vote on Tuesday did not indicate how they might come down on Trump’s guilt or innocence after a trial.

GOP @senrobportman: “”I’ve been very clear that former President Trump bears some responsibility for what happened on Jan. 6 through his words and actions. I will listen as a juror, but as I have said, I do have questions about the constitutionality of holding a Senate trial…”

Trump had refused the concede the outcome of the 2020 election of Joe Biden as the next US president and he assembled his supporters in Washington for a rally on January 6, the same day Congress was meeting in joint session to ratify Biden’s election win.

In a speech outside the White House, the former president urged his supporters to “fight like hell” to stop Biden from being confirmed as president.

Thousands then marched to the Capitol and a mob of hundreds stormed the building, sending legislators into hiding and resulting in five deaths.

There is a debate among scholars over whether the Senate can hold a trial for Trump now that he has left office. Many experts have said “late impeachment” is constitutional, arguing that presidents who engage in misconduct late in their terms should not be immune from the very process set out in the Constitution for holding them accountable.

The Constitution makes clear that impeachment proceedings can result in disqualification from holding office in the future, so there is still an active issue for the Senate to resolve, those scholars have said.

“My review of it has led me to conclude that it is constitutional, in recognising that impeachment is not solely about removing a president, it is also a matter of political consequence,” Murkowski told reporters.

Collins meanwhile said that with 45 Republicans already voting against the trial, it appears unlikely there would be enough support to convict Trump.

“I think it’s pretty obvious from the vote today that it is extraordinary unlikely that the president will be convicted,” @SenatorCollins tells @ESCochrane. “Just do the math.”

Senate Republican Leader Mitch McConnell, who has said Trump “provoked” the riots and indicated he is open to conviction, voted with Paul to move toward dismissing the trial.

Trump remains a powerful force among Republicans and his supporters have vowed to mount election challenges to legislators in the party who support conviction.

Some Republicans have criticised Trump’s false claims of voting fraud and his failed efforts to overturn Biden’s November 3 election victory. But no Senate Republicans have said definitively that they plan to vote to convict him.

Although the constitution calls on the chief justice to preside over presidential impeachment trials, a senator presides when the impeached is not the current president.

Senator Patrick Leahy, a senior Democrat first elected to the chamber in 1974, will preside over the trial and serve as a juror. He holds the title of Senate president pro tempore.

The nine House Democrats who will serve as prosecutors set the trial in motion on Monday by delivering the article of impeachment to the Senate.

Representative Jamie Raskin, a constitutional scholar and one of the House managers, will be acting as a prosecutor in the Senate trial.

“President Trump repeatedly issued false statements asserting that the presidential election results were the product of widespread fraud, and should not be accepted by the American people, or certified by state or federal officials,” Raskin told the Senate on Monday.

To be convicted, the Senate must secure a two-thirds majority on the impeachment charge.

If that happens, a subsequent vote could bar Trump from running for public office again in the future. 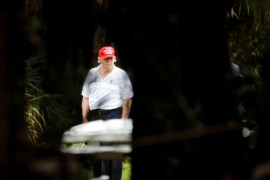 Trump out, Biden in: What did the media learn?

A look at the US media’s inauguration coverage. Plus, Nigerian digital outlets that told the #EndSARS story. 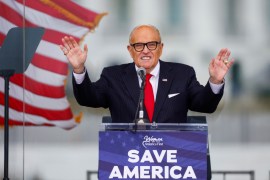 Dominion alleges Rudy Giuliani exploited false claims of election fraud to hawk gold coins and other items on a podcast.