A Ugandan court ordered security forces to cease surrounding the home of opposition leader Bobi Wine, who has been under house arrest since the January 14 presidential election.

Hours after the court’s order on Monday, Bobi Wine’s large compound in a leafy northern suburb of the capital, Kampala, remained blockaded.

The High Court ruled this morning that my continued house arrest (11 days now) is illegal & unconstitutional. Several hours later, the military still surrounds my home, blocking access to all! Perhaps (as always) waiting for Gen. Museveni's orders on the next course of action.

Troops have blocked the 38-year-old pop star-turned-politician from leaving his house since he voted in the January 14 election where he ran against long-serving incumbent President Yoweri Museveni.

Uganda’s military was aware of the court ruling and would comply, said military spokeswoman Brigadier Flavia Byekwaso, without specifying when soldiers would depart.

Pressure has been mounting on the government to free Bobi Wine, including from the United States and rights group Amnesty International which called his incarceration arbitrary and politically motivated.

Joel Ssenyonyi, spokesman for Wine’s National Unity Platform (NUP), said lawyers were moving to serve the court order to security agencies. “Their continued presence there is illegal,” he said.

Museveni, 76, who has been in power since 1986, was declared winner of the poll with 59 percent of votes versus 35 percent for Bobi Wine, who had for years denounced corruption and nepotism in his songs.

Bobi Wine has accused Museveni of staging a “coup” in last week’s election and is urging his supporters to protest his loss through nonviolent means. But he suggested in a statement on Friday he might not go to court to challenge the official results because of concerns a possible loss there would validate Museveni’s win.

He said he would announce a decision “in a few days.”

Museveni, 76, has dismissed allegations of vote-rigging, calling the election “the most cheating-free” since independence from Britain in 1962.

Ugandan authorities have said Bobi Wine can only leave his home on the outskirts of the capital under military escort because they fear his presence in public could incite rioting.

But the judge said in his ruling that Bobi Wine’s home is not a proper detention facility and noted authorities should criminally charge him if he threatens public order.

US ambassador Natalie E Brown had tried to visit Bobi Wine at his home, drawing an accusation of meddling and subversion from the Ugandan government.

Museveni has long been a Western ally, receiving copious aid and sending troops to regional trouble spots including Somalia to fight Islamist militants.

But Western backers have become increasingly frustrated at his reluctance to cede power and crackdowns on opponents.

Bobi Wine had channelled the anger of many young Ugandans who view former guerrilla leader Museveni as an out-of-touch autocrat repressing dissenters and failing to create jobs.

“The Ugandan government continues to use state security in a partisan manner to harass and intimidate its citizens, press, and political opposition,” tweeted  US House Majority Leader Steny Hoyer on Sunday.

“Mr Museveni’s tactics towards those who advocate for an inclusive democracy is dangerous and must be addressed by the global community.”

Museveni casts Wine as an upstart backed by foreign powers and says only his administration can guarantee political stability and economic progress.

Uganda’s election was marred by violence ahead of polling day as well as an internet shutdown that remained in force until four days after the election. Social media sites remain restricted.

Uganda has never witnessed a peaceful transfer of power — one reason why even some within Museveni’s party urge him to preside over an orderly transition. 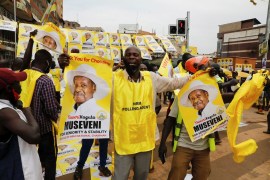 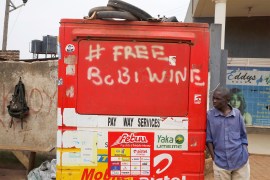 US Ambassador Natalie E Brown was stopped from visiting Bobi Wine who is effectively under house arrest. 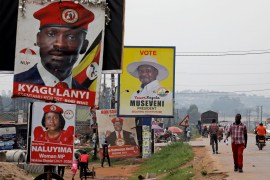