Renowned US television broadcaster Larry King has died aged 87 in the state of California.

Ora Media, a production company he co-founded, did not state a cause of death on Saturday but media reports said King had been battling COVID-19 for weeks and had suffered several health problems in recent years, including a near-fatal stroke in 2019 and diabetes.

He had been hospitalised at Cedars Sinai Medical Center in Los Angeles for more than a week, CNN said on Saturday.

Millions of people watched him interview world leaders, entertainers and other celebrities on CNN’s Larry King Live, which ran from 1985 to 2010.

Hunched over his desk in suspenders, rolled-up shirt sleeves and owlish glasses, he made his show one of the network’s prime attractions with a mix of interviews, political discussions, current event debates and phone calls from viewers.

“For 63 years and across the platforms of radio, television and digital media, Larry’s many thousands of interviews, awards and global acclaim stand as a testament to his unique and lasting talent as a broadcaster,” Ora Media said in a statement posted on Twitter.

King was born Lawrence Harvey Zeiger in 1933, a son of Jewish immigrants from Eastern Europe who ran a bar and grill in the Brooklyn borough of New York City.

His early career in radio in Miami, Florida was plagued by financial woes, gambling, and debt delinquency that eventually saw him lose the interview show he hosted.

King emerged from the period to host the US’s first national call-in radio show in 1978.

Washington, DC-based The Larry King Show was eventually transmitted on more than 300 stations and brought King to national attention, eventually leading to his titular CNN programme.

In 1995, King conducted a joint interview with Palestinian Liberation Organization Chairman Yasser Arafat, King Hussein of Jordan and Israeli Prime Minister Yitzhak Rabin, in what was hailed as a primetime peace summit.

He was also notorious for landing interviews few could get, including with singer Frank Sinatra and actor Marlon Brando.

“My duty, as I see it, is I’m a conduit,” King told the Hartford Courant in 2007. “I ask the best questions I can. I listen to the answers. I try to follow up. And hopefully, the audience makes a conclusion. I’m not there to make a conclusion. I’m not a soapbox talk-show host… So what I try to do is present someone in the best light.”

King was married eight times to seven women, most recently to singer Shawn Southwick, who was 26 years younger. He had five children, two of whom died in 2020.

Tributes poured in for King on Saturday.

Veteran CNN foreign correspondent Christiane Amanpour remembered King as “a giant of broadcasting and a master of the TV celebrity/statesman-woman interview”.

Star Trek icon and social media personality George Takei noted how King understood “human triumph and frailty equally well”, while actress Kirstie Alley described him as “one of the only talk show hosts who let you talk”.

Larry King was a giant of broadcasting and a master of the TV celebrity/statesman-woman interview.

His name is synonymous with CNN and he was vital to the network’s ascent. EVERYONE wanted to be on Larry King Live. May he Rest in Peace.https://t.co/XTgeMqjmcg

British TV hosts Piers Morgan and Craig Ferguson, both of whom have had shows in the US, paid tribute to King’s interviewing skills.

“Larry King was a hero of mine until we fell out after I replaced him at CNN & he said my show was ‘like watching your mother-in-law go over a cliff in your new Bentley.’ (He married 8 times so a mother-in-law expert),” said Morgan.

“But he was a brilliant broadcaster and masterful TV interviewer.” 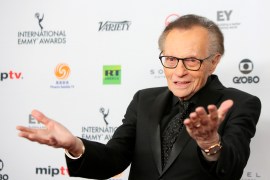 The 87-year-old has been hospitalised for more than a week at Cedars Sinai Medical Center in Los Angeles, US media says.