Oli dismissed the legislature in December, accusing members of his own party – including the former rebels – of noncooperation, and called for new elections in April.

The move plunged Nepal into fresh political uncertainty after years of instability, short-lived governments and earthquakes that devastated the country in 2015.

A senior police official said an estimated 25,000 people had gathered to protest near Oli’s office and more marches were planned across the Himalayan nation, which lies between India and China.

Former Maoist commander and co-chair of the Nepal Communist Party (NCP) Pushpa Kamal Dahal, who led the 1996-2006 uprising, told demonstrators in Kathmandu that Oli was attempting to “derail the peace process”.

“The elected parliament must be reinstated,” he told the huge crowd, many waving red hammer and sickle flags.

Former Prime Ministers Dahal, who led a decade long Maoist resistance that ended in 2006, and Jhal Nath Khanal, were also at the rally.

All three former prime ministers are from Oli’s party but oppose the dissolution.

Oli’s government has also weathered accusations of corruption and criticism of its handling of the coronavirus pandemic.

But his decision to dissolve Parliament came after months of clashes with Dahal, who helped Oli come to power when their political parties merged in 2018.

The pair had previously clashed over their power-sharing agreement and a lack of consultation.

Following the parliament’s dissolution, two factions of the NCP have informally split and have described themselves as the legitimate faction and staked claims over the party’s election symbol and its name.

Legal experts said the hearing on Oli’s decision was expected to go on until February as more than 300 lawyers had registered their names to participate in the proceedings. 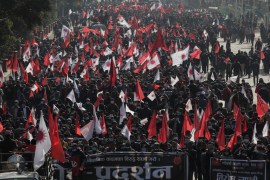 Protesters reject December 20 decision as unconstitutional as they rally outside PM Oli’s office despite COVID curbs. Kathmandu on Monday witnessed clashes between riot police and protesters, who are demanding a return of the monarchy. 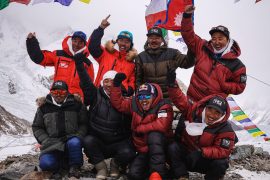 The group of 10 Nepalis was the only successful team so far among dozens currently attempting to scale the mountain. 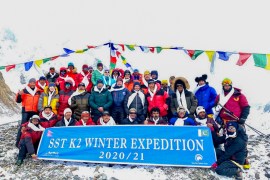