Rescuers in China were drilling new shafts on Thursday to reach miners trapped underground for 11 days following an explosion, including one they hope to use to bring the survivors back to safety.

A total of 22 workers were trapped underground in the January 10 blast in the Hushan gold mine on the outskirts of Yantai, a key gold producing region in Shandong on the northeast coast. One worker has been confirmed dead with the fate of a number of others still uncertain.

For days, rescuers have been in contact with 11 miners trapped in the middle section of the mine, about 350 metres (1,148 feet) underground, and have managed to send them food and medical supplies.

State media, however, reported on Wednesday that at least one of them – earlier reported to be in a serious condition with a head injury – had died.

Of the 10 miners who are alive, eight are in stable condition, while two are “feeling weak,” CCTV said.

The whereabouts and condition of their colleagues are still unknown.

The local government said on its official social media feed on Thursday that rescuers had started drilling a 10th channel with a 711mm (28 inches) diameter that they hope will allow the survivors to be brought to the surface.

One borehole had to be sealed up with cement after a water leak threatened the miners’ safety.

On a foggy Thursday morning, the road leading to the mine was sealed off by police, while health workers in protective gear took temperatures as part of COVID-19 precautions.

About 600 people are involved in the rescue, with as many as 25 ambulances waiting at the scene, as well as neurosurgeons, trauma specialists and psychologists.

A Reuters team saw fire trucks and cars coming and going through a checkpoint on an approach road.

Footage by CCTV showed several large cranes, trucks and construction equipment perched on a bare cliffside at the scene of the rescue operations on Wednesday.

The progress of the rescue has been slow because they are drilling through granite, according to Chen Fei, a top city official, and the extraction could be further complicated by the water-logged state of the mine.

Overnight temperatures in Qixia are set to drop below freezing during the next week.

Several waterproof back-up phones were sent down to the trapped miners after they wrote a second note on Tuesday morning saying earlier phones were damaged, the official Xinhua news agency reported.

Rescue teams initially lost precious time as it took more than a day for the accident to be reported, China Youth Daily reported, citing provincial authorities.

Both the local Communist Party secretary and the mayor have been sacked over the 30-hour delay and an official investigation is under way to determine the cause of the explosion.

Mining accidents are common in China, where the industry has a poor safety record and regulations are often weakly enforced.

In December, 23 workers died after being stuck underground in the southwestern city of Chongqing. 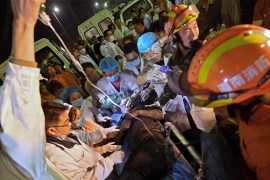 Blast at southwest China mine leaves at least 14 miners dead

Two people are still trapped underground in the latest of a series of accidents at mines in China. 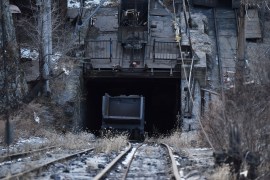 One survivor taken to hospital after excessively high levels of carbon monoxide kill workers at Chongqing mine. 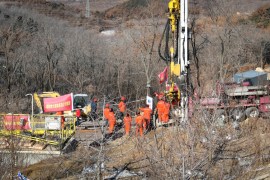 At least 12 of the 22 workers have been located, but the whereabouts of the others remains unknown.