Trump boarded the presidential helicopter Marine One at 8:20am (13:20 GMT) on Wednesday.

He briefly spoke to reporters calling his term the “honour of a lifetime” and an “amazing four years” before boarding the helicopter enroute to a farewell ceremony at Joint Base Andrews, before flying to Florida.

The departure comes less than four hours before Joe Biden will become the country’s 46th president.

Capping a presidency that prided itself on bucking modern political norms, Trump ended his four-year stay at 1600 Pennsylvania Avenue with one final breach of decorum as he became the first president in more than 150 years to skip his successor’s inauguration.

He did adhere to one tradition of an outgoing president – leaving a note for his successor. Biden told reporters in the Oval Office that Trump had left him “a very generous letter,” but he would not disclose its contents.

The real estate-mogul-turned-reality television star-turned-president has maintained that November’s election was “rigged” and “stolen” from him – claims that were found to have no basis in reality despite numerous court challenges, audits and recounts.

While failing to overturn the results, Trump’s defiant campaign of misinformation did leave a mark.

Rioters egged on by the president breached the US Capitol as Congress met to certify Biden’s victory on January 6. Five people were killed in the violence.

In an extraordinary moment on Tuesday, Trump’s last full day in office, Republican Senate Majority Leader Mitch McConnell explicitly placed the blame at Trump’s feet, saying the rioters were “fed lies” and were “provoked by the president and other powerful people”.

Trump struck a defiant note as he prepared to leave Joint Base Andrews for his Mar-a-Lago resort.

“So just a goodbye. We love you. We will be back in some form,” Trump told supporters before boarding Air Force One to the Frank Sinatra classic ‘My Way’.

The US continues to brace for further violence by “domestic extremists” that federal authorities have warned could target Washington, DC, and the capitals of all 50 US states.

The storming of the seat of the US legislature this month, the first breach since 1814, could also derail Trump’s future political ambitions; as a single-term president, he would be eligible to run for a second term in 2024.

But lawmakers are looking to block Trump from holding any US office in the future.

Accused of “incitement to insurrection” for his incessant attempts to overturn the election results and a fiery rally held before the Capitol mayhem, Trump on January 14 became the only president in US history to be impeached twice by the House of Representatives.

A Senate trial in the early days of the Biden administration could see Trump barred from holding federal office again, with McConnell’s words indicating some Republicans may be open to conviction.

Trump, who had never held public office previously, rose to prominence on conservative media as a proponent of the unfounded and racist “birther movement” that claimed then-President Barack Obama was not a US citizen.

His meteoric rise during the 2016 Republican primary reshaped the party, while his campaign launch speech labelling Mexican migrants as “rapists” set the tone for a nationalist and divisive style that has come to define large swathes of the party.

After leaving office, Trump has floated the idea of starting his own media empire that can rival Fox News, a network that at once served as a de facto Trump mouthpiece.

Trump, who will reportedly mull his future with a small group of aides while in Florida, also faces a pending investigation by the Manhattan district attorney looking into “extensive and protracted criminal conduct at the Trump Organization”, the conglomerate he owns.

Along with an array of lawsuits, Trump may also face a criminal investigation from the Fulton County district attorney in Georgia, who is mulling a probe into Trump’s attempt to convince the state’s top election official to change the vote tally.

When Trump’s term ended at midday, he was no longer shielded from indictment. 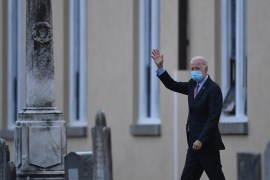 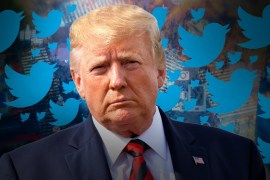 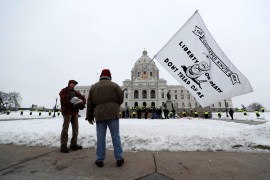 US law enforcement agencies had warned of violent protests across the country before Joe Biden’s inauguration.