Joe Biden takes office on Wednesday with a promise to overturn on “day one” the so-called Muslim Ban – the executive order that outgoing President Donald Trump put in place restricting citizens from several Muslim-majority countries from entering the United States.

The ban, which fulfilled a central Trump campaign promise, had immediate and far-reaching consequences. It stranded refugees in third countries, divided families and denied critical healthcare to ill people. It prevented American citizens from being joined by friends and relatives for weddings, funerals and graduations and kept couples from getting married.

“Prohibiting Muslims from entering the country is morally wrong,” Biden says on his campaign website, “and there is no intelligence or evidence that suggests it makes our nation more secure.”

Rights advocates and Muslim American groups have welcomed Biden’s commitment to overturning the measure, but question whether it can do enough to address the harm it has caused to families over the past four years.

“We are happy that Biden is going to repeal the ban,” said Ibraham Qatabi, a legal worker at the Center for Constitutional Rights.

“But the question is, what does that mean for families impacted by the ban?” Qatabi told Al Jazeera. “Are they going to get their visas and be reunited with their families?”

Meysam Azin, 40, an American citizen who was born in Iran, lodged green card applications for his elderly parents, aged 65 and 68 in December 2015 – a year before he and his wife were planning on starting a family, hoping they would be able to come and help raise them.

But the travel ban imposed just over a year later put major hurdles in their process. He sought the help of a lawyer. Still, their application was stuck in “administrative processing” for months, and when they heard back, it was for requests for more documentation. His mother, Fatima, was finally called for an interview in January 2020, but not the father.

Their situation is further complicated by the fact that there are no US embassies in Iran, so they would have to travel to nearby countries, Armenia or Turkey for consular interviews, or in Azin’s parents’ case, the UAE, a country they cannot reach because of coronavirus travel restrictions.

Azin, who holds a PhD in electrical engineering and lives in San Diego with his wife and two children, says the process has been so stressful that it led to him being diagnosed with severe anxiety and depression in 2017 and later, an autoimmune disease. His father, too, recently began showing signs of depression and dementia.

“I daydream about it every day that they’re going to come,” Azin told Al Jazeera. “I dream that we are all sitting outside in our back yard and we’re barbecuing and the kids are running around,” he says.

On January 27, 2017, a week after taking office, Trump abruptly announced the first travel ban. The decision sent shockwaves across the world and caused chaos in dozens of US airports as hundreds of travellers who were in midair when the announcement was made, were suddenly in possession of invalid US visas. Many were detained and sent home.

In the US it caused outrage among rights groups who challenged the measure in court, arguing that it is discriminatory and unconstitutional.

Lower courts struck down the first two iterations of the ban. But in June 2018, the US Supreme Court upheld the third version which primarily affected nationals from Iran, Yemen, Syria, Somalia, Nigeria, Libya, Myanmar, Sudan and Chad. It also included restrictions on citizens from Eritrea, Kyrgyzstan, North Korea, Tanzania and Venezuela.

Official records show at least 88,000 people were subject to the ban.

Defenders of the ban say it was a justified move, as it allowed immigration agencies to properly vet citizens from countries that do not keep or share intelligence records with the US.

“Those particular countries are especially problematic for American intelligence and law enforcement to vet for security, because they are largely ungoverned,” said Todd Bensman, Senior National Security Fellow at the Center for Immigration Studies, citing the examples of Libya and Yemen, two war-torn countries that lack stable governments.

“From a national security perspective, it was a good thing,” Bensman said. “It definitely reduced the risk that people would get in and conduct attacks,” adding that it helped vetting officers “to determine whether applicants are part of jihadist movements or terrorist groups, may be radicalised or have some disqualifying history that would make them ineligible.”

Muslim American groups say the national security argument was a guise that helped the third iteration succeed in court, they also cite the introduction of a waiver provision that allowed – at least in theory – for exceptions for some foreign nationals to file in order to enter the country.

“There was a third iteration of the Muslim ban because the first two were so discriminatory that it would have never passed constitutional muster in the Supreme Court,” said Robert McCaw, Government Affairs Director at the Council on American-Islamic Relations.

“The third ban, while still inherently discriminatory in its origins,” McCaw said, “on its face value was built on national security concerns and the promise of a waiver process that was never realised.”

Hiba Ghalib, an immigration lawyer in Atlanta, Georgia, said to be approved for a waiver, petitioners must satisfy three criteria: that “undue hardship” would be caused to the applicant if their entry was denied, entry to the country would be in the US’s national interest, and that their entry would not pose a threat to US national or public safety.

In practice, Ghalib said the waiver process proved difficult to manoeuvre, not least because the criteria were overly broad.

“It was a mess,” Ghalib said. “It was arbitrary and also new, but it was also intentional,” she told Al Jazeera. “There was no clarity or consistency because that way it could remain subjective.”

According to The Bridge Initiative, a research group at Georgetown University, 74 percent of waiver applications between December 2017 and April 2020 were denied.

Ghalib added that more concerning was the time it was taking immigration agencies to inform applicants of the outcome of their submissions, often taking months and even years.

“Everyone was all of a sudden in limbo,” Ghalib said. “They were just not making decisions. The lack of responsiveness became the most frustrating thing for people,” she added.

In July, Democrats passed the No Ban Act in Congress, which would repeal the travel ban and prevent the US president from imposing future immigration restrictions based on religion or ethnicity. At the time, the bill did not advance to the Republican-controlled Senate.

With Senate control soon to be held by Democrats with a slim one-vote majority, it remains uncertain if the bill can advance to a vote.

“It targeted mostly Muslim majority countries for poor security reasons,” Nowrasteh told Al Jazeera. “Removing it is not only good from a public policy perspective, but it also repeals the most visible and well-known immigration action taken by Trump.”

Finally, on December 23, Azin’s father, Ali received notice for an interview – five years after his green card application was lodged. A typical application for other nationalities, Azin’s lawyer, Curtis Morrison, said, takes about a year to process. They are now working on finding a way to get an appointment at a US embassy.

Azin’s case, Morrison said, is by no means an exception. According to The Bridge Project, issuance of immigrant visas to Iranians dropped by 79 percent between fiscal years 2016 and 2019. And repealing the ban, he said, may not automatically lead to an improvement in the delays.

“I’m really excited that Biden has promised to overturn this ban, but the backlog is enormous,” Morrison said. “There are so many families who have been separated for years, so many involve children and elderly parents.”

Still, Azin said after Biden won the election, he became relieved and hopeful that he could be reunited with his parents soon.

“This is just a dream right now, it is frustrating because I thought it is my right to have this.” 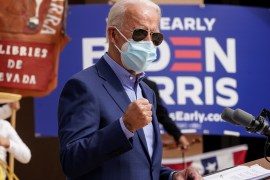 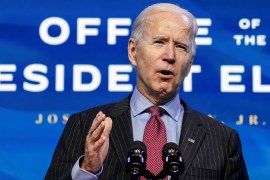 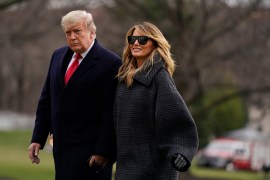 Spokeswoman for president-elect who takes office on January 20 says controls on Europe, Brazil arrivals will remain.