US President Donald Trump has released a farewell video, touting what he described as the success of his “America First” platform and telling his supporters that “the movement we started is only just beginning”.

Trump, who will leave office on Wednesday but will not attend the inauguration of President-elect Joe Biden, acknowledged in the nearly 20-minute video that a new administration would be sworn in this week.

“We extend our best wishes,” he said. “And we also want them to have luck. A very important word.

“Now, as we prepare to hand power over to a new administration at noon on Wednesday, I want you to know that the movement we started is only just beginning,” he said.

Trump, who has maintained his false claims that November’s presidential election was “stolen” from him amid widespread voter fraud, described himself on Tuesday as “the only true outsider ever to win the presidency”.

He only acknowledged he would not serve a second term as president on January 7, a day after his supporters stormed the US Capitol as Congress met to certify Biden’s victory. The incident left five dead.

Trump has still not explicitly acknowledged that he lost to Biden.

In the video released on Tuesday, Trump condemned the violence on Capitol Hill, saying “all Americans were horrified by the assault on our Capitol”.

“Political violence is an attack on everything we cherish as Americans. It can never be tolerated.”

Trump has been accused of egging on his supporters in a rally shortly before the Capitol breach. In a video message amid the chaos, Trump told supporters to go home, while saying “We love you” and again repeating his baseless allegation that the election had been “stolen”.

Last week, the US House of Representatives voted to impeach Trump for “incitement to insurrection” in relation to the riot.

Shortly before the release of Trump’s farewell message, Senate Majority Leader Mitch McConnell said the rioters were “fed lies” and “provoked by the president and other powerful people”.

Trump will face a trial in the Senate on the article of impeachment, which will require a two-thirds majority for conviction in the chamber, which is split 50-50 between Democrats and Republicans.

A guilty vote could also lead to Trump being barred from holding future federal office. As a single-term president, Trump is currently eligible to run again in 2024 and is expected to be an influential force leading up to that race.

On Tuesday, Trump also thanked his family, his cabinet and Vice President Mike Pence, whom he had specifically pressured in his attempts to overturn the election results.

Al Jazeera’s John Hendren, reporting from Washington, DC on Tuesday evening, said the message was perhaps more gracious than many expected. But, Hendren said, “it was truly Trumpian in the sense that he never really acknowledged Joe Biden by name”.

Trump’s address served as a bookend to his inaugural speech in 2017, where he laid out his vision of leadership based on the concept of “America First”.

“Four years ago … we embarked on a mission to make America great again for all Americans,” he said. “As I conclude my term as the 45th president of the United States, I stand before you truly proud of what we have achieved together.”

Trump also hailed the pre-pandemic US economy and the rate of development of a COVID-19 vaccine under his administration’s Operation Warp Speed, as well as his crackdown on undocumented immigrants and normalisation deals between Israel and Arab states.

Trump is the first president in more than 150 years who will not attend his successor’s inauguration.

He is set to have a send-off event at Joint Base Andrews before flying to Florida on Wednesday. 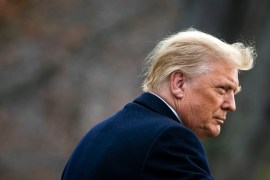 Donald Trump was a manifestation of the problems in US society. His legacy will be a testament to this. 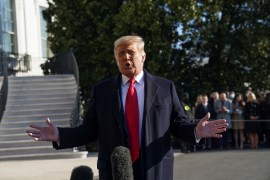 Dozens of businesses took action against US President Donald Trump and some Republican lawmakers after the Capitol riot. 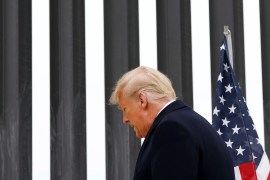 By pardoning himself, the president would admit guilt for wrongdoing, which he would never do.