To the east, thousands have crossed the border to escape new attacks; to the west, thousands more hide in churches or the bush. A major humanitarian crisis is deepening in the Central African Republic (CAR) after an array of armed groups launched a military offensive and unleashed fresh unrest in the war-weary country.

This rebel alliance wreaked havoc in the run-up to elections last month, preventing hundreds of thousands of people from voting and causing a fragile peace deal to collapse. Fighters last week carried out a brazen assault on the capital, Bangui, before being pushed back by security forces.

Aid groups warn the surge in violence is preventing them from reaching the most vulnerable in a country where armed groups control large swaths of territory. In total, more than 100,000 people have been displaced – on top of the 1.2 million already uprooted by earlier conflict – as CAR is forced, once again, to grapple with growing insecurity.

“The needs are increasing and the funding is shrinking,” Hamdi Bukhari, the country representative for the United Nations’ refugee agency, (UNHCR) told Al Jazeera.

“We expect more unrest to happen. An escalation would have a serious impact on the population which is already in a critical humanitarian situation.”

Some of the country’s most powerful armed groups – including those that were supposedly sworn enemies – have formed the so-called Coalition of Patriots for Change.

Among them are elements of the former Seleka alliance of mainly-Muslim rebels who, in 2013, overthrew then-President Francois Bozize. Following that coup, Anti-balaka militias from Christian and animist communities fought back as the country fell into a violent spiral of revenge attacks.

Seleka rebels fragmented into rival factions, competing over territory in which to extort locals and traffic gold and diamonds.

Despite a peace deal signed in 2019, former Seleka and Anti-balaka militias have now partnered and launched a fresh insurrection. Marriages of convenience between rival factions are not uncommon in the cynical power play of CAR’s politics, while uprisings are a favourite tactic for rebel groups operating in distant, poorly-resourced provinces to gain pay-offs from Bangui’s central government in exchange for laying down arms.

The rebels’ recent attacks on towns across CAR severely disrupted the December 27 election in which President Faustin-Archange Touadera sought a second term.

With polling stations vandalised and voters subjected to intimidation, rebels managed to prevent the vote from taking place in more than 40 percent of electoral districts.

On Monday, CAR’s Constitutional Court confirmed Touadera’s re-election, granting five more years in power to the one-time mathematics lecturer, although the political opposition continues to contest the result given the disrupted turnout, which stood at more than a third.

The combined pro-government force of UN peacekeepers, federal soldiers, Rwandan reinforcements and Russian paramilitaries is likely to prevent a repeat of 2013’s full-blown war which led to the deaths of thousands.

But the attacks could continue, if not intensify, as the push for armed confrontation overshadows calls for dialogue and mediation.

“What seems most likely for the next couple of months is an escalation of violence,” said Hans De Marie Heungoup, a senior analyst for the International Crisis Group think-tank.

CAR’s government and the UN accuse the former president, Bozize, of stoking the rebellion to retake power, which he denies.

The 74-year-old former general, who seized power in a 2003 coup, returned from exile in late 2019 to run against Touadera as a rival presidential candidate, though the country’s top court barred him last month because of an international warrant and UN sanctions against him for alleged war crimes.

Amid gunfire and explosions, security forces launched a counterattack while civilians were seen fleeing streets littered with bullets.

Seven UN peacekeepers have been killed since the uprising began last month.

“We want peace, nothing but peace,” a female cafe owner in Bangui told local media. “We have suffered enough in the displacement camps. We want peace.”

Touadera’s second term opens against a backdrop of sharp division following an election that served only to polarise society rather than reconcile it.

Observers believe the offensive was less about seizing control of the capital – clearly impossible with just a few hundred young fighters – and more about increasing the rebel coalition’s leverage in future negotiations by flaunting its ability to strike a city previously thought to be outside the reach of provincial fighters.

Beyond the corridors of power in Bangui, the violence is inflaming one of the world’s worst humanitarian crises. “The rebellion has been an almost unbearable situation for the people here,” said Denise Brown, the UN’s humanitarian coordinator in CAR.

Nearly 60,000 people have fled into neighbouring countries since December – most of them crossing the Mbomou River into the Democratic Republic of the Congo. Last week, 10,000 refugees arrived there in a single day after rebels seized the town of Bangassou, leaving many in dire need of food, shelter and adequate sanitation.

Hundreds more sought refuge inside a hospital run by the medical charity, Doctors Without Borders (Medecins Sans Frontieres, or MSF) – most of them women and children. The UN force says it has since regained control of Bangassou; two peacekeepers were killed in a subsequent attack on Monday.

The initial outbreak of hostilities prompted some 185,000 people across the country to flee their homes. Much of this exodus has been characterised as “pre-emptive displacement” in which civilians, fearing a repeat of violations from the past, flee before fighters can reach their homes. While many of them have since returned, almost a third of them – about 58,000 people – remain internally displaced.

In the face of this turmoil, UNHCR’s Bukhari said the agency faces a serious shortfall and is only able to continue operations for two months.

“Funds will not last long,” he warned. “The situation is still unfolding and we should not stop our response to this emergency. The Central African population has been suffering for the last decades from unrest and repeated violence. They are tired and traumatised. They need peace.”

The Norwegian Refugee Council (NRC) warns that mounting hostilities have brought vital humanitarian operations to a standstill in several areas. Rebel activity on the main supply route from Cameroon has created food shortages, causing some prices to treble.

There have been dozens of incidents against humanitarian personnel recorded since mid-December, including raids on compounds and the murder of an aid worker. In a country already rated as one of the world’s most dangerous for humanitarians, these repeated attacks have forced some aid groups to close field offices and evacuate staff to the capital.

“Hindering our access in the country is like cutting the lifeline to more than half of the population who relies on humanitarian support to survive,” said David Manan, NRC’s country director.

The UN’s humanitarian coordinator hopes to regain access soon. “All of our efforts right now are ensuring that, where temporarily we had to stop activities because of the armed groups, we will go back into those areas – that’s what I am anticipating in the next couple of weeks,” said Brown.

MSF doctors have faced an influx of wounded people, providing emergency care to almost 200 of them in the first few weeks of the uprising. Despite this grim tally, the violence has not yet matched the widespread atrocities of 2013’s descent into war.

That reprieve may not last. The crisis is complicated by the involvement of so many different military groups – from the hotch-potch of rebels to Russian mercenaries, ill-disciplined state troops and a shadowy new militia known as Les Requins, or The Sharks, allegedly operating on behalf of the presidency.

“One possibility is that the rebellion starts fragmenting, with a weaker and weaker command and control,” Heungoup told Al Jazeera.

“If that happens, it is likely that uncontrollable members of the rebellion will increasingly attack civilians. The more the crisis worsens, this could become a real humanitarian emergency.” 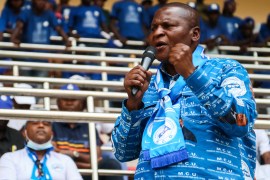 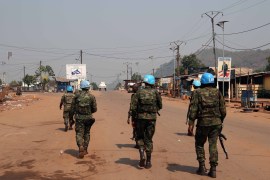 The Central African Republic needs to go through a thorough process of reconciliation. 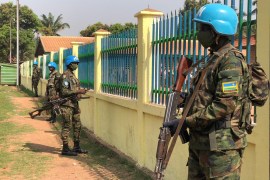 UN mission in the country says rebels ambushed the soldiers who were carrying out a security operation in Grimari.

Fighters abandoned their positions in Bangassou, a town they captured on January 3, after ultimatum from peacekeepers.