India’s homegrown coronavirus vaccine developer Bharat Biotech has warned people with weak immunity and other medical conditions including allergies, fever or a bleeding disorder to consult a doctor before getting the shot – and if possible avoid the vaccine.

The company on Tuesday said those receiving its Covaxin shots should disclose their medical condition, medicines they are taking and any history of allergies.

It said severe allergic reactions among vaccine recipients may include difficulty breathing, swelling of the face and throat, rapid heartbeat, body rashes, dizziness and weakness.

The directive by the Indian manufacturer came three days after India started what the government calls the “world’s largest vaccination programme”.

However, the vaccine developed by Bharat Biotech ran into controversy after the country’s drug regulator allowed its use without concrete data showing its effectiveness in preventing COVID-19.

The regulator on January 4 approved the emergency use of two vaccines, one developed by Oxford University and United Kingdom-based drugmaker AstraZeneca, and the other by Bharat Biotech.

The drug regulator took the step without publishing information about the Indian vaccine’s efficacy.

Bharat Biotech has still not published data on its vaccine’s effectiveness but said it is complying with clinical trial guidelines.

The regulator maintains the vaccine is safe and gave its approval in the belief that it could be more effective in tackling a new variant of the coronavirus found in the UK.

The regulator and the company have said efficacy data will be published after continuing late clinical trials conclude.

Most hospitals in India are inoculating healthcare workers with the AstraZeneca vaccine. But turnout, particularly in those hospitals using the Bharat Biotech vaccine, has been relatively low, health officials said.

Yesterday only 8 people took COVAXIN at AIIMS though the target was 100. No propaganda is bigger than human consciousness. No matter if Director himself took vaccine but AIIMS employees will not fall prey of jingoism unless u win their confidence by showing data #VaccinationDrive

Hospitals in New Delhi that have been administering the Bharat Biotech vaccine have seen many doctors hesitant to get the shot.

Tens of thousands of people have been given the shot in the past three days after India started inoculating healthcare workers last weekend.

India vaccinated 148,266 people on Monday, taking its total to 381,305, the health ministry said. Indian authorities hope to give vaccines to 300 million people by July 2021.

The recipients are to include 30 million doctors, nurses and other front-line workers, to be followed by 270 million people who either are above 50 or have illnesses that make them vulnerable to COVID-19.

The vaccination drive began at a time when coronavirus infections have fallen sharply, and much of life has returned to normal.

India is second only to the United States in the number of confirmed cases at 10.5 million. The country ranks third in the number of reported deaths, behind the US and Brazil, with more than 152,000 fatalities. 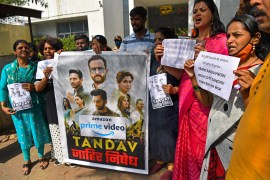 Politicians from governing party call for show to be removed, saying it was ‘deliberately mocking Hindu gods’. 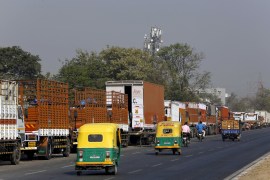 The accident took place early on Tuesday near a village in Surat district in the western state of Gujarat.