President-elect Joe Biden’s nominee to be the next Director of National Intelligence has said she intends to release an unclassified report to the United States Congress on the assassination of Saudi journalist Jamal Khashoggi.

During a Senate confirmation hearing on Tuesday, Senator Ron Wyden told Avril Haines that she had an opportunity to “immediately turn the page on the excessive secrecy and lawlessness of the outgoing administration”.

He then asked if she would submit the report if she is confirmed.

“Yes, senator. Absolutely, I will follow the law,” Haines replied.

Congress passed a defence bill in December 2019 that included a provision requiring the Office of the Director of National Intelligence to release within 30 days an unclassified report on the murder of Khashoggi.

This is huge: Incoming DNI, Avril Haines, just committed to releasing an unclassified report on the brutal murder of Jamal Khashoggi. For two years, I've been fighting for transparency and accountability for those responsible. We are closer than ever to getting #JusticeForJamal. pic.twitter.com/FNSarsF4Ce

Khashoggi, a Washington Post columnist and critic of Saudi government policies, was assassinated by a team of Saudi agents at the country’s consulate in Istanbul in October 2018. He had gone to the building to retrieve documents to get married.

Human rights groups and United Nations experts denounced the brazen killing, while US lawmakers in Washington urged Donald Trump’s administration to investigate who was responsible.

US media outlets reported in November 2018 that the CIA had concluded Saudi Crown Prince Mohammed bin Salman ordered the assassination – a charge that bin Salman, also known as MBS, has denied.

Trump has maintained his support of Saudi Arabia and MBS despite calls for accountability for Khashoggi’s murder.

The Trump administration has refused to release the full Khashoggi report in defiance of the law, telling lawmakers that revealing the information would compromise the national intelligence office’s sources and methods.

The 2019 defence bill ordered the office to present evidence about the knowledge or role any current or former Saudi government officials or Saudi political figures may have had in the “directing, ordering, or tampering of evidence” in Khashoggi’s killing.

It also asked the director to outline a list of foreign individuals that the director believes with “high confidence” were responsible or complicit in Khashoggi’s murder, knew or assisted in the killing, or impeded the investigation into what took place. 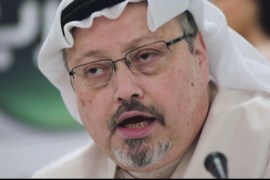 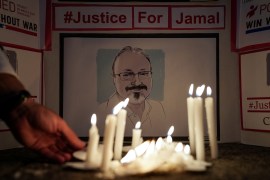 Will there ever be accountability for murder of Jamal Khashoggi?

No country should be able to buy their way out of accountability, no matter their influence or who their friends are.

Jamal gave me hope when I needed it the most.