Rescuers in China have retrieved a note from a group of miners trapped underground following a blast a week ago, saying 12 of the workers are still alive, state media reported on Monday.

The fate of the other 10 miners is “uncertain”, the China Daily said.

Rescuers found the slip of paper after successfully drilling a borehole through to the tunnel where the men were trapped on January 10. They also heard tapping sounds and felt tugging on the iron ropes used to deliver water and nutrients, state media said.

In the note, the men said they were exhausted, and in need of medical supplies including painkillers, antibiotics, and bandages.

The note also said there was little ventilation and the mine was full of dust and water.

“We hope the rescue will continue, and we will have hope.” the Global Times, a state-run tabloid, reported the note saying.

Signs of Life! A paper slip retrieved from underneath a mine said that 12 workers are still alive while the other 10 are in unclear situation, after they were trapped following a gold mine blast in east China’s Shandong https://t.co/y0pENrVkt3 pic.twitter.com/Svu0wcqH8k

The miners were trapped underground after a blast about 240 metres (787 feet) away from the entrance to the gold mine, which was under construction in the eastern province of Shandong.

More than 300 people are involved in the rescue effort and excavators and machinery are on site, but the teams have warned it will be extremely difficult to bring out the miners who were working more than 600 metres (1969 feet) from the tunnel’s entrance.

The accident took place on Sunday afternoon, but was not reported to the authorities until 30 hours later. The mine’s managers have been detained while two senior local officials have also been sacked because of the blast, state media said.

China’s mines are among the most dangerous in the world.

At least 18 people died in December after being trapped in a mine in China’s southwestern city of Chongqing. 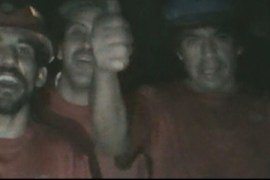 Chile mine blast 10 years on

Al Jazeera looks at what happened to the miners whose rescue was watched by millions around the world. 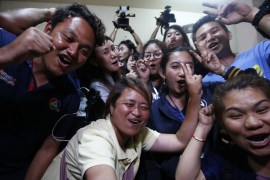 Boys and their coach who were saved from cave in northern Thailand lost 2kg on average, but are doing well. 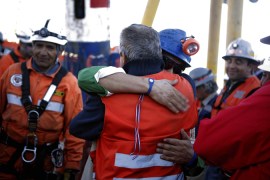 All 33 workers trapped for more than two months in a collapsed mine have been lifted to safety.