The Trump administration notified Huawei suppliers, including United States-based chipmaker Intel, that it is revoking certain licences to sell to the Chinese company and intends to reject dozens of other applications to supply the telecommunications firm, people familiar with the matter told the Reuters news agency.

The action – likely the last against Huawei Technologies under Republican President Donald Trump – is the latest in a long-running effort to weaken the world’s largest telecommunications equipment maker, which Washington sees as a national security threat.

The notices came amid a flurry of American efforts against China in the final days of Trump’s administration. Democrat Joe Biden will take the oath of office as president on Wednesday.

A spokesperson for Intel Corp declined to comment. Commerce said it could not comment on specific licensing decisions, but said the department continues to work with other agencies to “consistently” apply licensing policies in a way that “protects US national security and foreign policy interests”.

In an email seen by Reuters documenting the actions, the Semiconductor Industry Association said on Friday the Commerce Department had issued “intents to deny a significant number of license requests for exports to Huawei and a revocation of at least one previously issued license”. Sources familiar with the situation, who spoke on condition of anonymity, said there was more than one revocation. One of the sources said eight licences were yanked from four companies.

A ‘broad range’ of products

Japanese flash memory chip maker Kioxia Corp had at least one licence revoked, two of the sources said. The company, formerly known as Toshiba Memory Corp, said it does not “disclose business details regarding specific products or customers”.

The semiconductor association’s email said the actions spanned a “broad range” of products in the semiconductor industry and asked companies whether they had received notices.

The email noted that companies had been waiting “many months” for licensing decisions, and with less than a week left in the administration, dealing with the denials was a challenge.

A spokesman for the semiconductor group did not respond to a request for comment.

Companies that received the “intent to deny” notices have 20 days to respond, and the Commerce Department has 45 days to advise them of any change in a decision or it becomes final. Companies would then have another 45 days to appeal.

The US put Huawei on a Commerce Department “entity list” in May 2019, restricting suppliers from selling US goods and technology to it.

But some sales were allowed and others denied while the government intensified its crackdown on the company, in part by expanding US authority to require licences for sales of semiconductors made abroad with American technology. 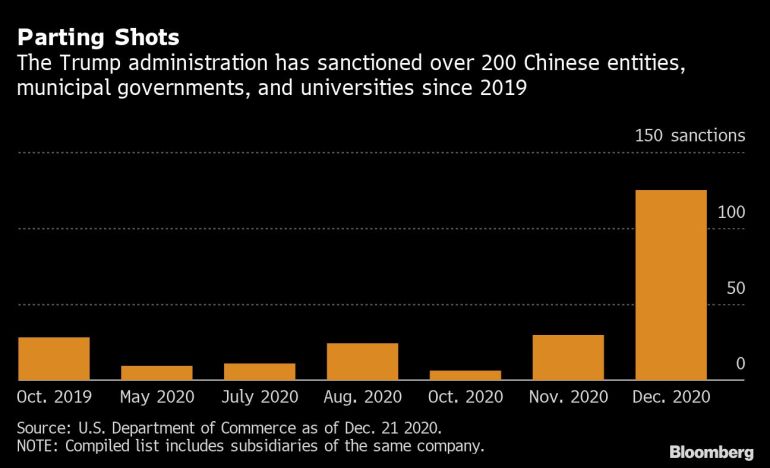 Before the latest action, some 150 licences were pending for $120bn worth of goods and technology, which had been held up because various US agencies could not agree on whether they should be granted, a person familiar with the matter said.

Another $280bn of licence applications for goods and technology for Huawei still have not been processed, the source said, but now are more likely to be denied.

An August rule said that products with 5G capabilities were likely to be rejected, but sales of less sophisticated technology would be decided on a case-by-case basis.

The US made the latest decisions during a half-dozen meetings starting on January 4 with senior officials from the Departments of Commerce, State, Defense and Energy, the source said. The officials developed detailed guidance with regard to which technologies were capable of 5G, and then applied that standard, the person added.

That meant issuing denials for the vast majority of the roughly 150 disputed applications, and revoking the eight licences to make those consistent with the latest denials, the source said.

The US action came after pressure from a recent Trump appointee in the Commerce Department, Corey Stewart, who wanted to push through hardline China policies after being hired for a two-month stint in the agency at the end of the administration.

Trump has targeted Huawei in other ways. Meng Wanzhou, Huawei’s chief financial officer, was arrested in Canada in December 2018, on a US warrant. Meng, the daughter of Huawei’s founder, and the company itself were indicted for misleading banks about its business in Iran.

Meng has said she is innocent. Huawei has denied the claims of spying and pleaded not guilty to the indictment, which also includes charges of violating US sanctions against Iran and conspiring to steal trade secrets from American technology companies.