As required by a law passed by Iran’s parliament in early December, the country’s nuclear organisation has five months to prepare for producing uranium metal – an element that provides the nuclear fuel used to generate electricity in nuclear power stations.

In a statement on Saturday, France, Germany and the United Kingdom – the three European signatories of Iran’s 2015 nuclear deal with world powers – said Tehran’s plans to produce uranium metal has “potentially grave military implications” and the country has “no credible civilian use” for the product.

“We strongly urge Iran to halt its activity and return to compliance with its JCPOA commitments without further delay if it is serious about preserving the deal,” they said in reference to the formal name of the accord, the Joint Comprehensive Plan of Action.

Their statement came after the International Atomic Energy Agency (IAEA) reported Iran had said it is advancing research on uranium metal production with the aim of feeding a research reactor in Tehran.

“We hope that the IAEA will prevent creating misunderstandings by mentioning unnecessary details in its reports,” the organisation said.

As part of the 2015 accord, which was also signed by the United States, China and Russia, Iran agreed to a 15-year ban on producing or acquiring uranium metals, among other things. It received sanctions relief in return.

But one year after outgoing US President Donald Trump unilaterally abandoned that deal in May 2018 and imposed harsh sanctions, Iran gradually scaled back its commitments under the deal.

In November last year, top Iranian nuclear and military scientist Mohsen Fakhrizadeh was assassinated, escalating tensions and prompting the Iranian parliament to pass the law calling for further rollbacks of commitments under the accord until sanctions are lifted.

US President-elect Joe Biden, who has vowed to revitalise the nuclear deal he helped seal under former president Barack Obama, has until February 21 to return to the accord before Iran further increases nuclear activity and asks IAEA inspectors to leave the country.

In an interview published on Saturday, French Foreign Minister Jean-Eves Le Drian said Iran is building up its nuclear weapons capacity and Tehran and Washington must return to the nuclear deal quickly.

He also called for negotiations over Iran’s “ballistic proliferation” and its “destabilisation of its neighbours in the region”, issues that Iran has said are off the table.

Iran’s Foreign Minister Mohammad Javad Zarif delivered a harsh rebuke of his French counterpart on Sunday, saying European leaders have been following Washington’s lead and have done nothing to maintain the JCPOA.

“JCPOA is alive because of Iran and not E3,” he said, addressing Le Drian.

E3 leaders—who rely on signature of OFAC functionaries to carry out their obligations under JCPOA—have done ZILCH to maintain JCPOA.

JCPOA is alive because of Iran and not E3, @JY_LeDrian.

Macron had pushed for a $15bn credit line for Iran in September 2019 to bring Iran back to full compliance with the JCPOA, a plan among several European schemes that was blocked by Washington.

The UK owes Iran 400 million pounds ($543m) over a purchase of chieftain tanks by the country’s late shah more than four decades ago that was never delivered.

Reality check: YOU are destabilizing OUR region. Stop protecting criminals who chainsaw their critics and use YOUR arms to slaughter children in Yemen. 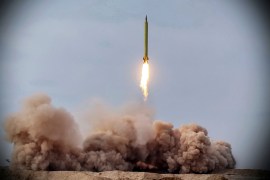 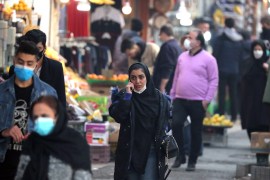 Secretary of State Mike Pompeo says seven companies were targeted for shipping steel to or from Iran. 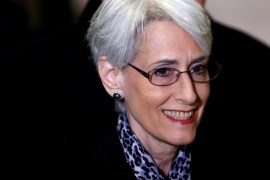