Activists and lawyers have hailed a recent move by Pakistan’s top court to hear on merit a high-profile sexual harassment case that launched the country’s #MeToo movement, caused a stir on social media, and polarised public opinion.

Earlier this week, the Supreme Court agreed to deliberate on whether prominent singer and actress Meesha Shafi’s allegations against another singer and actor, Ali Zafar, fall under the country’s Protection Against Harassment of Women at the Workplace Act of 2010.

In April 2018, at the height of the global #MeToo movement, Shafi had accused Zafar on social media of sexual harassment of a physical nature on multiple occasions.

Sharing this because I believe that by speaking out about my own experience of sexual harassment, I will break the culture of silence that permeates through our society. It is not easy to speak out.. but it is harder to stay silent. My conscience will not allow it anymore #MeToo pic.twitter.com/iwex7e1NLZ

The following day, Zafar responded to the allegations via his social media accounts, rejecting Shafi’s claims and vowing to take the case “through the courts of law”.

Shafi’s appeal was rejected earlier by the Lahore High Court on technical claims that her allegations did not fall under the workplace harassment law.

However, the Supreme Court’s decision on Monday means the case will now move forward.

“The Supreme Court will now hear the case in detail and decide which categories of persons are protected under the law,” a member of Shafi’s legal team at the Supreme Court told Al Jazeera on condition of anonymity.

Last September, Shafi and eight other women were charged by police for criminal defamation after Zafar filed a suit against them.

Leena Ghani, a makeup artist and women’s rights activist, was one of the nine served the legal notice. On Wednesday, she filed a defamation case against Zafar in the provincial Sindh High Court.

After years of personal and legal attacks by Mr. Zafar, I have decided to stand up for myself and fight back.

They said go to the courts. So I did. #metoo #TimesUp pic.twitter.com/XSRyaMuTLB

Ghani’s case also details several instances where she alleges Zafar sexually harassed her since 2014. She is seeking 50 million rupees ($311,720) in damages.

“After living in fear and facing threats for over two years, I decided to come forward and fight,” Ghani told Al Jazeera.

She said that due to a lack of laws protecting women against sexual harassment, filing the defamation case was “the last option for me to fight back”.

“I have brought the details out in the open so people can’t say that women don’t come forward and talk,” she added.

Meanwhile, Zafar’s lawyer Muhammad Omar Tariq claimed on local media that when Ghani appeared before the court for defamation charge hearings last year, she insisted she “never alleged Zafar of sexually harassing her and was merely stating her opinion on social media”.

In response, Ghani said she “[appeared] in court as a character witness in Meesha’s case and therefore chose not to divulge details of my own experience of harassment”.

She added that she has received rape and death threats on social media from online trolls.

“If someone as famous as Meesha can be ridiculed and tortured for two years, what chances do women of less agency have?” she asked.

“When our cases are heard, it’s mostly men sitting on the bench [in the court]. When we go to courts, they are full of men. Men are not conditioned to understand verbal or physical harassment unless it’s a crime as heinous as rape.”

Last August, Zafar was awarded the Pride of Performance, the highest civilian award, by the Pakistani government. He said he was deeply honoured and “forever indebted to my fans and supporters” for receiving the award.

However, women’s rights activists in Pakistan slammed the government’s decision to honour a person accused of sexual harassment.

A joint statement from several rights organisations requested that government defer the decision given the pending cases against Zafar.

“The government must do more to lend its support to women so that all victims of sexual harassment can talk about their experiences and fight their cases,” said Ghani. 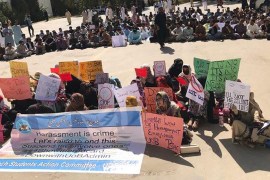 Many parents pull out their daughters from Balochistan University after CCTV footage was used to blackmail students. 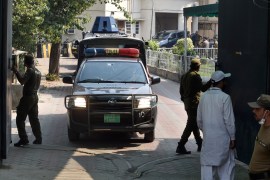 Arrest follows a weeks-long manhunt across Punjab province following the gang rape of a woman outside Lahore. 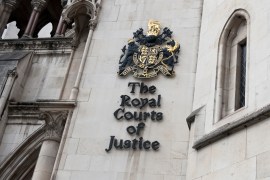 Why do so few rapes result in a conviction?

The MeToo movement sparked a rise in reports to police, but convictions remain three times lower than for other crimes.