Sheldon Adelson’s support for “extreme anti-Palestinian positions” will be felt for many years to come, Palestinian political analysts said on Tuesday, as news broke of the 87-year-old casino magnate’s death.

A key financial backer and political supporter of both outgoing US President Donald Trump and Israeli Prime Minister Benjamin Netanyahu, Adelson had an outsized impact on Palestinian lives, said Diana Buttu, a Palestinian lawyer and former adviser to the Palestinian negotiating team.

Adelson championed many of the right-wing policies upheld by Trump and Netanyahu, and was a strident opponent of the two-state solution to the conflict between Israel and the Palestinians.

Netanyahu also gained from Adelson’s 2007 launch of Israel Hayom, a free daily that is now Israel’s most widely circulated newspaper – and is considered firmly in support of the Israeli premier.

“Adelson was among the most disruptive individuals that Palestinians have ever had to contend with,” Buttu told Al Jazeera.

“His reach extended beyond the issue of settlements,” she said. “He was the person behind Israel Hayom, a right-wing newspaper. With that newspaper came some very fascist ideas.”

Champion of the settlements

Adelson died due to complications related to treatment for non-Hodgkin’s lymphoma, the Las Vegas Sands casino company, of which he was the chairman and CEO, said in a statement on Tuesday.

At the time of his death, Forbes ranked him the 19th richest person in the US with an estimated net worth of $35bn. “Adelson and his wife donated $123m to Republican campaigns and political action committees in 2018”, Forbes said.

Around the time the second Intifada erupted in 2000, Adelson started dedicating a sizeable chunk of his wealth to US presidential candidates who opposed Palestinian statehood.

He was also known for his staunch support for illegal Jewish settlements in the occupied Palestinian territories. The Adelson School of Medicine, which was founded in the settlement of Ariel in the occupied West Bank, was named in honour of the media mogul.

Adelson even committed himself to tackling pro-Palestine activism on US campuses.

In 2015, he hosted a meeting in Las Vegas with top donors and pro-Israel activists to fund various means to fight the Boycott, Divestment and Sanctions (BDS) movement on college campuses. The pro-Palestine movement was launched in 2005 to pressure Israel to end its occupation of Palestinian and Arab lands and to grant its Palestinian citizens equal rights.

The meeting, which was meant to be kept a secret, took tackling Israel boycott measures to a whole new level, The Forward reported at the time – elevating it from an initiative taken up squarely by student groups to one backed by wealthy philanthropists.

Adelson was one of the biggest supporters of the robust US-Israel relationship.

A passionate supporter of Jewish settler groups in Jerusalem, he also gave millions of dollars to supporters of Trump’s election campaign, an endeavour that secured him a seat at Trump’s inauguration almost four years ago.

“His legacy will be one that’s recorded in history as having played a massively outsized role in making politics of the US and Israel much worse than they would be otherwise,” said Yousef Munayyer, non-resident senior fellow at the Arab Center Washington DC.

“He constantly created financial incentives for politicians to engage in Islamophobia and take the most extreme anti-Palestinian positions possible. He was one of the biggest funders of right-wing Zionist organisations in the US as well as in Israel.”

Adelson was also a force behind Trump’s destructive foreign policy on Palestine, including his decision to move the US embassy from Tel Aviv to Jerusalem, which reversed Washington’s long-held policy on the matter.

Trump promised to move the US embassy and recognise Jerusalem as Israel’s capital during his election campaign. This had some traction among evangelicals and far-right members of the US Congress, but it was Netanyahu, the Israeli right, and a few Israel-focused billionaires, such as Adelson, who were the driving force behind the decision.

“He tirelessly advocated for the relocation of the United States embassy to Jerusalem, the recognition of Israeli sovereignty over the Golan Heights, and the pursuit of peace between Israel and its neighbors,” Trump said in a statement on Tuesday mourning Adelson’s death.

We will be feeling the effects of Mr Adelson's work for many decades to come and these will not be good effects, certainly not for Palestinians.

In a tweet on Tuesday, Netanyahu also expressed “sorrow and heartbreak” over Adelson’s death, which has dealt Israel’s longest-serving prime minister a blow as he faces trial over corruption allegations and ahead of an election in March – the fourth in two years.

“He was a massive supporter of Netanyahu and his support for Israeli news media in particular gave Netanyahu forums with which to compete in a very advantageous way that no other politician had,” Munayyer continued.

“We will be feeling the effects of Mr Adelson’s work for many decades to come and these will not be good effects, certainly not for Palestinians.” 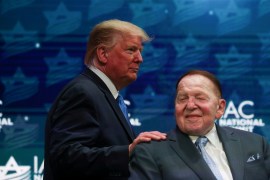 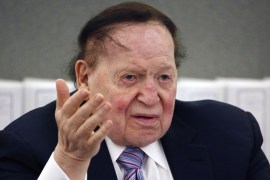 Who is Sheldon Adelson and can he sway the US election?

We ask if the casino tycoon and pro-Israel mega-donor wields more cash than clout or if he will soon become king-maker. 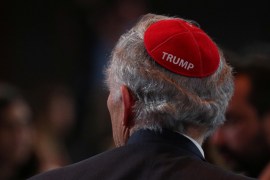 US leader hopes to repeat 2016 strategy next year by winning re-election through electoral college votes in key states.