The six-time Super Bowl-winning coach said he changed his mind after supporters of President Donald Trump stormed the Capitol Building – the seat of US Congress – ransacking offices and leaving threatening messages.

“Above all, I am an American citizen with great reverence for our nation’s values, freedom, and democracy,” Belichick said in a statement released on Monday, adding that he represented his family and the New England Patriots team.

The coach, who earlier said he was flattered by the opportunity to receive the medal, said that he would continue his efforts working on social justice, equality and human rights “while remaining true to people, team, and country I love outweigh the benefits of any individual award”.

Critics have blamed an incendiary speech by Trump for triggering the worst violence at the Capitol in over two centuries. Five people died during the assault.

A White House official said on Sunday, four days after the riots, that Trump would be awarding Belichick the medal – part of a late flurry of presentations that also included golfers Annika Sorenstam, Gary Player and the late Babe Zaharias.

Sorenstam and Player accepted their awards in a private ceremony the day after the violence in Washington, DC.

The decision by Belichick, who has supported Trump in the past, is yet another blow to an increasingly isolated US president. Several of his top advisers have resigned in recent days, citing Wednesday’s violence.

News that Belichick refused the Medal of Freedom sparked a positive reaction on social media.

Congratulations, Bill Belichick. You have Done The Right Thing.

“This president is not fit to be in office, so anything that he would bestow on anybody is meaningless. Thank you, Coach Belichick, for rejecting Trump’s award,” the senator said on Twitter.

This president is not fit to be in office, so anything that he would bestow on anybody is meaningless.

Although he describes himself as apolitical, Belichick has waded into politics on occasion.

In 2016, Trump read a glowing letter from Belichick while on the campaign trail, in which the coach praised his courage and leadership. Although Trump said the letter offered “best wishes for great results” on election day and “the opportunity to make America great again,” Belichick said it was merely to support a friend.

The coach’s support for Trump was criticised by some fans but did not seem to affect his standing with players in the locker room. Robert Kraft, owner of the Patriots, is also friendly with Trump.

The US president has had a long-running fight with the NFL over players kneeling during the national anthem, a gesture that was first adopted by some Black players to protest against racial disparities in the criminal justice system. Trump called on the league to ban players from “taking the knee” in protest.

Strained relations between the team’s players and the president surfaced on various occasions, including in 2019 when the Patriots did not attend a customary event at the White House to celebrate the win of the Super Bowl, citing conflicting schedules.

In the aftermath of George Floyd’s death this summer, Patriots players praised Belichick for providing an open forum for them to express their feelings on race and social injustice in America. 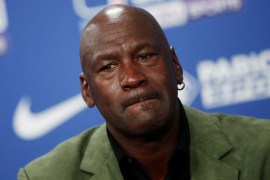 Michael Jordan: I support those calling out the ingrained racism

The basketball great joins growing number of sports stars who have voice support for protests against police brutality. 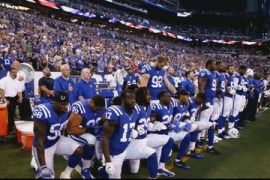 NFL Commissioner Roger Goodell has apologised for the way the US football league has handled players’ protests against racial injustice and police brutality. 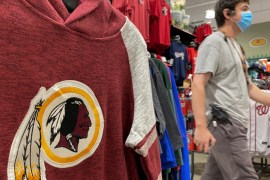 The Washington Redskins’s name has been source of controversy for years as many Indigenous view the term a racial slur.