Canada’s most populous province has declared a state of emergency over rising COVID-19 infection rates and hospitalisations that public health officials say could soon overwhelm the healthcare system in Ontario.

Premier Doug Ford said new restrictions, including more limited hours for non-essential businesses and school closures, would come into effect in different parts of the province between Tuesday and January 14.

“Ontario is in a crisis and with the current trends our hospital ICUs will be overwhelmed in a few short weeks with unthinkable consequences,” Ford told reporters during a press briefing on Tuesday afternoon.

Public health officials said earlier on Tuesday that COVID-19 deaths in Ontario could exceed those during the first wave of the pandemic and warned that the healthcare system could also soon be overwhelmed amid rising infections.

According to a projections report, Ontario authorities said daily deaths could double from 50 to 100 between now and the end of February if current novel coronavirus-related restrictions are maintained.

The number of patients in hospital intensive care units in the province could hit 500 in mid-January and surpass 1,000 by February in worst-case scenarios, they said.

“Without significant reductions in contacts, the health system will be overwhelmed and the mortality will exceed the first wave totals before a vaccine has time to take effect,” Dr. Adalsteinn Brown, co-chair of the province’s COVID-19 Science Advisory Table, said on Tuesday morning.

Ontario, Canada’s most populous province, imposed additional COVID-19 lockdown measures in late December to try to stem rising cases and hospitalisations, but health officials have said the situation continues to be worrying.

As it stands, one-quarter of Ontario hospitals already do not have ICU beds available, while another quarter only have one or two beds free, the province’s projections showed.

Hospitalisations jumped by 72 percent over the past four weeks, while ICU admissions increased by 61 percent.

“ICU occupancy is now over 400 beds and our scenarios are predicting that this could easily double by the end of the first week of February,” Brown said.

“The current restrictions will need to be augmented if the goal is to reduce case spread, reduce the crisis in our health system and save lives.”

Dr Nadia Alam, a family doctor in Georgetown, Ontario, a town about 60km (37 miles) west of downtown Toronto, told Al Jazeera last month that hospitals were full and struggling to handle high numbers of both COVID and non-COVID patients.

She said many nurses and other healthcare workers are doing double shifts, as the network is being stretched to its limits. “We’ve run out of people. We’ve run out of space,” she said at that time.

On Tuesday, Ontario reported 2,903 new single-day COVID-19 infections, including eight new cases of the variant first discovered in the UK.

Speaking to reporters outside his Ottawa home, Trudeau said the country now expects to receive 80 million doses of COVID-19 vaccine from BioNTech-Pfizer and Moderna Inc. this year.

Canada recently approved both vaccines and doses have been administered to healthcare workers and long-term care home residents across the country.

“We’re on track to have every Canadian who wants a vaccine receive one by September,” he said.

Trudeau also said COVID-19 border restrictions with the United States, which has the world’s highest case and death totals, would be extended until February 21. “This is an important decision and one that will keep people on both sides of the border safe,” he said. 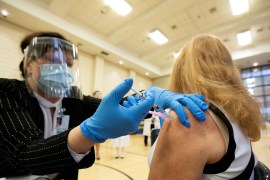 Canada: Is ‘me first’ COVID vaccine policy hurting other nations? 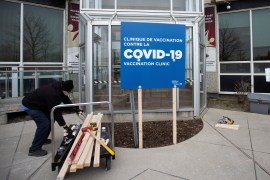 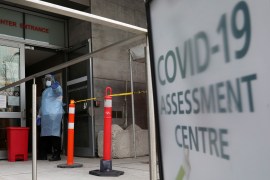