In an effort to burnish his legacy, President Donald Trump toured a section of newly constructed wall along the US-Mexico border Tuesday, but also defiantly criticised legislators’ efforts to derail his presidency in its final days.

During his remarks in Alamo, Texas, Trump said that discussion of invoking the 25th Amendment to remove him from office early “is of zero risk to me but will come back to haunt Joe Biden and the Biden administration”.

Without detailing what the repercussions may be, Trump added, “As the expression goes, be careful what you wish for.”

It is not completely clear what Trump is threatening, however, in October when House Democrats introduced a 25th Amendment-related bill, Trump tweeted a baseless theory that the impetus for that bill was Biden-centric.

“Crazy Nancy Pelosi is looking at the 25th Amendment in order to replace Joe Biden with Kamala Harris. The Dems want that to happen fast because Sleepy Joe is out of it!!!” Trump tweeted on October 9.

Trump also railed Tuesday about House Democrats’ effort to move forward on impeachment, calling it a “hoax” and “a continuation of the greatest and most vicious witch hunt in the history of our country and is causing tremendous anger, and division and pain. Far greater than most people will ever understand. Which is very dangerous for the USA, especially at this very tender time.”

The 25th Amendment of the US Constitution lays out a procedure in which the vice president and the president’s cabinet get together to strip the president’s power in the event he or she is unable to no longer perform their duties. Its intent was to set up a process in case a president became incapacitated and could no longer “discharge their powers”, but some have made the argument that it can be used to remove a rogue president, though that has not been tested in the courts.

Vice President Mike Pence has stated he would not take part in an effort to use the 25th Amendment to remove Trump, although the US House is attempting to pressure him by passing a bill later Tuesday urging him to do so.

If their effort fails to convince Pence, the House will move forward on Wednesday with a vote on articles of impeachment, which accuse the president of inciting a pro-Trump mob to storm the US Capitol last Wednesday.

Trump addressed the riot Tuesday saying the “mob … trashed the halls of government.”

“As I have consistently said throughout my administration, we believe in respecting America’s history and traditions, not tearing them down. We believe in the rule of law, not in violence or rioting.

Now is the time for our nation to heal and it’s time for peace and calm,” Trump continued. ‘We’re a nation of law and we’re a nation of order. What we must do to uphold the rule of law in America.”

Before departing for Texas, Trump insisted he was not the instigator of the violence that erupted last week.

“If you read my speech and many people have done it. And I’ve seen it both in the papers and in the media, on television. It’s been analysed. And people thought that what I said was totally appropriate,” Trump said before boarding Air Force One for his trip to Texas.

Many members of Congress – Democrats, as well as a growing number of Republicans – disagree with Trump’s take on his remarks. And so do a majority of Americans, according to polling released in recent days that showed a majority blaming Trump for last week’s violent and deadly riot at the US Capitol.

Alamo is the site of the 450th mile (724th kilometre) of the US-Mexico border wall Trump promised to build during his presidency.

One of the pillars of Trump’s presidential campaign in 2015-2016 was the promise that he would build a “big, beautiful wall” made of concrete and steel along the entire 1,954 miles (3,145 km) US southern border, to be paid for by Mexico, he insisted, in an effort to deter illegal border crossings.

In reality, he was only able to get 475 miles (764 km) of the wall constructed, paid for by the United States, most of it replacing existing barriers.

President-elect Joe Biden has promised a significant departure from Trump’s immigration policies, some of which have been deemed illegal and others viewed as extreme by his critics.

Biden has promised to end construction of the border wall and ease immigration and asylum restrictions put into place by the Trump administration.

Trump pushed back on the idea of Biden’s resistance to the border wall saying on Tuesday, “We can’t let the next administration even think about taking it down, if you can believe that. I don’t think that’ll happen.”

Biden does seem to be heeding warnings that moving too swiftly to reverse course on Trump’s immigration policies could cause a spike in illegal border crossings. Biden has said he will roll out his changes during the first several months of his presidency, drawing the ire of progressive Democrats, who are pressing for immediate reversals of Trump’s immigration policies.

Trump has been encouraged by his staff to spend his final days in office touting his legacy, Reuters reported. Trump’s backers feel his biggest accomplishments include the border wall, his 2017 tax cut, and his hundreds of judicial appointments, especially the three conservative Supreme Court justices he was able to seat.

While most outgoing presidents in modern US history followed the model Trump’s staff suggest, the president instead became laser-focused in his final two months pushing the unfounded narrative that he won the election in a “landslide” and that his “victory” was “stolen”, culminating in the violent siege at the US Capitol last Wednesday. 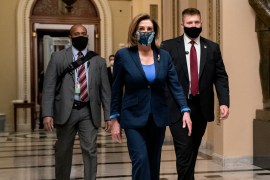 The vote will unlikely sway Vice President Mike Pence who already said he does not support invoking the 25th Amendment. 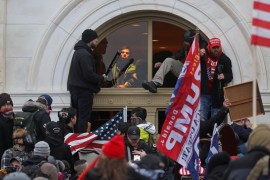 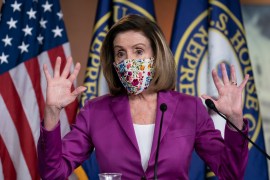