Russian President Vladimir Putin has said it is time to discuss “next steps” regarding the Nagorno-Karabakh truce Moscow brokered, including the work of Russian peacekeepers stationed in the region, demarcation lines and humanitarian issues.

His comments came as he sat down for talks in the Kremlin on Monday with Azerbaijani President Ilham Aliyev and Armenian Prime Minister Nikol Pashinyan, bringing together the leaders for the first time since the truce sealed in November ended six weeks of fighting over the contested Nagorno-Karabakh region.

Pashinyan and Aliyev did not shake hands, only exchanging curt greetings as they sat down at an oval table opposite Putin.

Putin said the peace agreement has been successfully implemented, “creating the necessary basis for a long-term and full-format settlement of the old conflict.”

The Russian-brokered peace agreement halted 44 days of conflict between the Azerbaijani army and Armenian forces over the mountainous region and surrounding areas, locking in territorial gains for Azerbaijan.

But tensions persist, with sporadic fighting, prisoners of war continuing to be held by both sides, and disagreements over how a prospective new transport corridor cutting through the region will work.

The region is within Azerbaijan’s borders and is not recognised as Armenian land by any country, including Armenia.

But it has been under the control of ethnic Armenian forces and self-appointed Armenian officials, backed by Armenia since a war between the rivals that claimed thousands of lives resulted in a ceasefire 1994.

Hostilities over Nagorno-Karabakh flared up again on September 27, 2020.

The Azerbaijani military pushed deep into the region and surrounding areas in fighting involving heavy artillery and drones that left more than 6,000 people dead on both sides, the majority of them soldiers.

Under the peace deal, Russia has deployed about 2,000 peacekeepers to Nagorno-Karabakh for at least five years.

The truce was celebrated in Azerbaijan as a major triumph, but sparked outrage and mass protests in Armenia, where thousands repeatedly took to the streets demanding Pashinyan’s resignation.

Many protesters on Monday tried to block a highway linking the Armenian capital with the airport to prevent Pashinyan from travelling to Moscow, but police dispersed them.

The Armenian prime minister has defended the deal as a painful but necessary move that prevented Azerbaijan from overrunning the entire Nagorno-Karabakh region.

Aliyev has meanwhile cast the war victory at home as an historic righting of wrongs, something Armenia rejects.

Azerbaijan and its ally Turkey have shut their borders with Armenia ever since the Nagorno-Karabakh conflict erupted, a blockade that has weakened the economy of the landlocked country.

For Russia, the conflict highlighted the rising influence of Ankara in the South Caucasus, part of the former Soviet Union that Moscow has traditionally seen as its own sphere of influence.

But by brokering the deal and getting Russian peacekeepers on the ground, Putin has thwarted a stronger Turkish presence for now while expanding Moscow’s own military footprint.

Dmitri Trenin, a political analyst for the Moscow Carnegie Center, said the Kremlin hoped Monday’s talks would allow it to reaffirm its influence in the region.

“(The) peacekeeping function is Moscow’s advantage in its competitive relationship with Ankara,” Trenin wrote on Twitter.

Putin’s meetings tomorrow w/Armenia &Azerbaijan leaders in Moscow are designed not only to deal w/multiple practical issues in #Karabakh, but also to reaffirm Russia’s role in S.Caucasus. Peacekeeping function is Moscow’s advantage in its competitive relationship w/Ankara.

Journalist Onnik J Krikorian meanwhile said if Putin insisted on a “deal” between Armenia and Azerbaijan during Monday’s talks there “will be one”.

“That then raises the issue of longevity, but it does provide a window for economic links to be restored and for confidence-building measures to be implemented,” Kirkorian wrote on Twitter.

“And there are few, especially in Armenia, that will go against Russia. Successfully and without repercussions, anyway.” 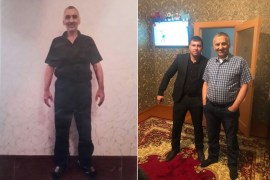 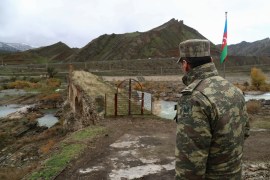 Azerbaijan defence ministry says one soldier has been killed and another injured in an ambush in Khojavend. 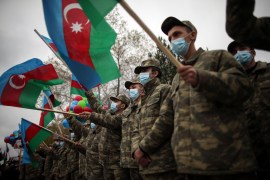 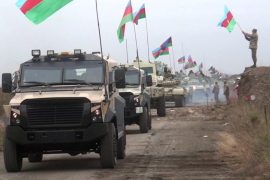 Servicemen accused of defiling Armenian bodies and vandalising gravestones during conflict over Nagorno-Karabakh.