The Palestinian Authority (PA) has said it expects to receive its first COVID-19 vaccine doses in March under a deal with British drug giant AstraZeneca, and accused Israel of ignoring its responsibilities to ensure vaccines are available in occupied territory.

While Israel has already become the world leader in vaccinations per capita, Palestinians in the Israeli-occupied West Bank and the besieged Gaza Strip have yet to secure their first supplies.

Yasser Bozyeh, the Palestinian general director of public health, told Reuters news agency that in addition to reaching an agreement in principle with AstraZeneca, the PA had also sought supplies from Moderna, Johnson & Johnson and Russia, which has developed the Sputnik V vaccine.

Supplies would also come through a World Health Organization vaccine programme for poor and middle-income countries.

The Palestinian foreign ministry said in a statement Israel had been “ignoring its duties as an occupation power and committing racial discrimination against the Palestinian people, depriving them of their right to healthcare”.

Under interim peace accords with Israel, the PA was granted limited powers of governance in Areas A and B of the West Bank.

The outcomes of the deal, known as the Oslo Accords, have in effect left Israel in complete control of the Palestinian economy, as well as its civil and security matters in more than 60 percent of the West Bank, designated as Area C.

Despite granting the interim government control over administrative and internal security matters in parts of the West Bank, Israel maintains military control over the entire area.

Hamas governs the Gaza Strip, which has been under a joint Israeli-Egyptian air, land and naval blockade since 2007.

On the West Bank, it has given vaccines only to Jewish settlers living in illegal settlements, but not to Palestinians.

Human rights groups including Amnesty International say Israel has a legal obligation to provide vaccines for Palestinians under occupation, while activists on Twitter have slammed the Israeli vaccination drive excluding Palestinians in occupied territories as “apartheid”.

Israel spreading covid to Palestinians under their control through violent raids and military occupation only to not give them the vaccines is apartheid at its finest.

I am so grossed out by celebratory accounts of Israel’s vaccination programme when it is predicated on denial of vaccine to Palestinian people under its de jure and de facto control in its prisons, the West Bank and Gaza.

Israeli officials say they could share vaccines with the Palestinians once Israel’s own needs are met.

A World Health Organization (WHO) official said on Sunday the organisation had held “informal discussions” with Israel over allocating some supplies to the Palestinians to inoculate health workers.

The official, Gerald Rockenschaub, head of the WHO office in the Palestinian territories, said Israel indicated it would explore the option. 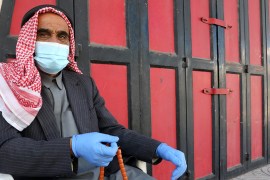 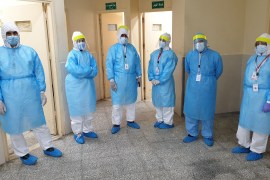 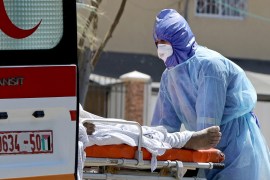