A Hindu temple in the northwest Pakistani province of Khyber Pakhtunkhwa that was destroyed by a Muslim mob earlier this week will be rebuilt using provincial government funds, its information minister said on Friday.

Police have arrested dozens of people, including the local Muslim leader, for their involvement in Wednesday’s attack on the Shri Paramhans Ji Maharaj Samadhi temple in the town of Karak, some 100km (62 miles) southeast of the provincial capital, Peshawar.

“The chief minister has ordered the reconstruction of the temple and adjoining house,” he told AFP news agency.

About 1,500 people descended on the temple in the remote village after protesting against renovations being made to an adjoining building owned by a Hindu group. They used sledgehammers to knock down walls before setting the building ablaze.

Construction will start as soon as possible with the support of the Hindu community, Bangash said, adding security would be provided at the site.

District police chief Irfanullah Khan told AFP about 45 people had been arrested in connection with the incident – including a local Muslim leader, mullah Sharif, who is accused of inciting the mob.

On Thursday, Pakistan’s Supreme Court ordered authorities to submit a report on the temple’s destruction, which drew condemnation from human rights activists and the minority Hindu community.

In Karachi, the capital of Sindh province and where most of the country’s Hindus live, more than 200 people protested outside the Supreme Court, calling for justice.

“You must respect other people’s religion. We are Pakistanis, and for God’s sake, nobody needs to give us a certificate of loyalty”, said Mangla Sharma, a Hindu member of Sindh’s provincial assembly.

The temple, which was destroyed in similar circumstances in 1997, was rebuilt under the direction of the top court in 2015.

While no Hindus live in the area, devotees often visit the temple and its shrine to pay homage to the Hindu saint Shri Paramhans, who died there before the 1947 partition of India that gave birth to Pakistan.

Although Muslims and Hindus generally live peacefully together in Pakistan, there have been other attacks on Hindu temples in recent years.

Last year, the United States placed Pakistan on a list of “countries of particular concern” for religious freedom violations.

He took to Twitter on Thursday, saying attacks on places of worship of minority religious groups were forbidden in Islam and “protection of religious freedom of minorities is our religious, constitutional, moral and national responsibility”.

On Wednesday, Pakistan’s human rights minister, Shireen Mazari, said the government had a responsibility to “ensure safety and security of all our citizens and their places of worship”.

Prime Minister Khan has assured Pakistan’s minorities of their safety.

“I want to warn our people that anyone in Pakistan targeting our non-Muslim citizens or their places of worship will be dealt with strictly. Our minorities are equal citizens of this country,” Khan tweeted in February. 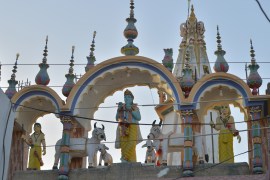 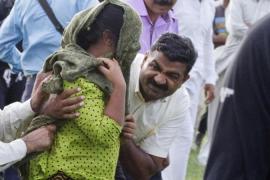 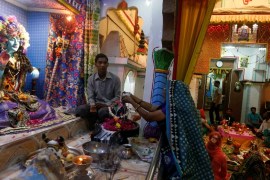 Mob attacks and sets fire to Hindu temple in Pakistan

Videos circulating on social media showed men using hammers to damage the temple after an address from Muslim leaders. 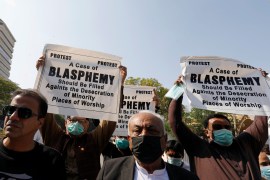 Pakistan arrests more than a dozen over Hindu temple attack

A Muslim mob attacked and set fire to a Hindu temple in the northwestern province of Khyber Pakthunkhwa.