A Saudi court has overturned five death sentences over dissident journalist Jamal Khashoggi’s killing, a final ruling in the case that saw the Washington Post columnist killed and dismembered by a Saudi hit squad.

The court on Monday handed 20-year sentences to five people and three others were sentenced to between seven to 10 years, state media reported. The eight convicted of the murder, which took place in Saudi Arabia’s consulate in Turkey, were not identified.

The verdict comes after Khashoggi’s sons said in May they had “pardoned” the killers, a move condemned as a “parody of justice” by a United Nations’ expert.

On Tuesday, UN spokesman Rupert Colville, while noting that the global body opposes the death penalty, said the Khashoggi trial lacked transparency and fell short on assigning accountability for the crime.

“This is case where there has not been proper transparency in the justice process, those responsible should be prosecuted and given sentences commensurate with the crime,” he said in Geneva.

“There is a whole issue of transparency and accountability in the case.”

#JamalKhashoggi: 1.The Saudi Prosecutor performed one more act today in this parody of justice. But these verdicts carry no legal or moral legitimacy. They came at the end of a process which was neither fair, nor just, or transparent. https://t.co/nt4n2CqS21

Khashoggi went missing on October 2, 2018, while visiting the consulate in Istanbul. Turkish authorities later revealed he was murdered inside the building by a Saudi assassination team. His body has never been found.

The trial was widely criticised by rights groups who noted no senior officials nor anyone suspected of ordering the killing was found guilty. The independence of the court was also brought into question.

Many Saudis hailed Monday’s ruling in comments on Twitter, a platform favoured by pro-government supporters. Some said the verdict ended one of the most difficult political cases the kingdom has faced, while others said it makes Saudi Arabia the “land of justice” and a “country where rights are never lost”.

Khalil Jahshan, from the Arab Center in Washington, DC, noted the prosecutor’s office said the announcement “closes the case forever”.

“Most importantly, where is the body of Jamal Khashoggi? With these sentences, I assume they have found out what happened to his body,” Jahshan, a family friend, told Al Jazeera.

“The whole verdict seems to me to have been manipulated. According to legal practice in Saudi Arabia, the family has a right to commute any sentence, and the family has issued such a declaration – most probably under duress. I don’t think it was done freely, knowing the family.”

He had been living in exile in the United States for about a year, leaving Saudi Arabia just as Saudi Crown Prince Mohammed bin Salman (MBS) was beginning to unleash a crackdown on Saudi human rights activists, writers and critics of the kingdom’s devastating war in Yemen.

Questions remain over Prince Mohammed’s role in ordering the killing, with several western intelligence agencies alluding he had knowledge of the operation beforehand. MBS has said he had nothing to do with the murder, but acknowledged “it happened under my watch”.

The Saudi government called the assassination a “rogue operation” after repeatedly denying any involvement for weeks.

Agnes Callamard – the United Nations’s special rapporteur on extrajudicial, summary or arbitrary executions – also found “credible evidence” that Prince Mohammed and other senior Saudi officials were liable for the killing in an investigative report published in June 2019.

Callamard said on Twitter on Monday the trial was not fair or transparent and “the responsibility of Crown Prince Mohammed bin Salman has not even been addressed”.

“The ruling handed down today in Saudi Arabia again makes a complete mockery of justice,” Hatice Cengiz said on Twitter.

“The Saudi authorities are closing the case without the world knowing the truth of who is responsible for Jamal’s murder. Who planned it, who ordered it, where is the body? These are the most important questions that remain totally unanswered,”

Rami Khouri, from the American University of Beirut, told Al Jazeera the Saudi trial was widely criticised around the world as going against internationally acceptable standards of justice.

“The issue of who actually ordered it [the murder] is still a big question. The crown prince has been implicated – that’s a very serious accusation when it comes from the investigator at the United Nations and the CIA. There are a lot of questions that need to be answered,” said Khouri.

He noted the Khashoggi case was not the only one with other governments in the Middle East region accused of “following, tormenting, and terrorising” critics living around the world.

A team of 15 Saudi agents flew to Turkey to meet Khashoggi inside the consulate for an appointment to pick up documents allowing him to marry his Turkish fiancee, who waited outside.

Turkey apparently had the Saudi consulate bugged and shared audio of the killing with the CIA, among other intelligence agencies.

The assassination of Khashoggi – a US resident – prompted a worldwide backlash against Saudi Arabia and caused lasting damage to MBS’s image in the international arena.

Ankara’s ties with Riyadh came under intense strain after the journalist’s killing as he was an acquaintance of Turkish President Recep Tayyip Erdogan.

According to the indictment, Saudi Arabia’s former deputy intelligence chief Ahmed al-Assiri is accused of establishing a hit team and planning the murder.

Saud al-Qahtani, a royal court and media adviser, is accused of instigating and leading the operation by giving orders to the hit team.

Khouri noted al-Qahtani was not charged in the Saudi trial and still works for the government. “There are many questions that will continue to be raised,” he said.

Other suspects are mainly Saudi military and intelligence officers who allegedly took part. Among those ensnared in the killing is a forensic doctor believed to have been tasked with cutting the body into pieces with a bone saw.

The Saudi verdicts came after the kingdom tried 11 people in total in December, sentencing five to death and ordering three others to lengthy prison terms for covering up the crime.

The Saudi trial, however, concluded the killing was not premeditated. That paved the way for Salah Khashoggi, one of the writer’s sons, to months later announce the family had forgiven his Saudi killers, which essentially allows them to be pardoned from execution in accordance with Islamic law.

Salah Khashoggi lives in Saudi Arabia and has received financial compensation from the royal court for his father’s killing.

A small number of diplomats, including from Turkey, as well as members of Khashoggi’s family, were allowed to attend the initial trial’s nine court sessions. Independent media were barred. 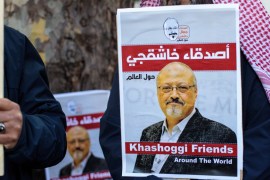 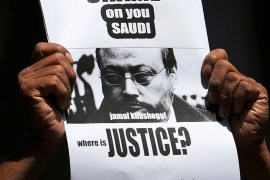