The United Kingdom and Canada have imposed travel bans and asset freezes on Belarusian President Alexander Lukashenko, his son and other senior officials over accusations their government rigged an election and committed violence against protesters.

Tuesday’s sanctions were the first to be implemented by major Western powers over the crisis in Belarus, a close Russian ally.

More than 12,000 people have been arrested in mass demonstrations since Lukashenko, who has dominated the country for 26 years, was named the landslide winner of an August 9 presidential election his opponents say was rigged. Lukashenko denies electoral fraud.

UK Foreign Secretary Dominic Raab said the sanctions were part of a coordinated approach with Canada “in a bid to uphold democratic values and put pressure on those responsible for repression”.

Raab called Lukashenko’s rule “violent and fraudulent” and said the sanctions are meant to send a clear message that “we don’t accept the results of this rigged election”.

“We will hold those responsible for the thuggery deployed against the Belarusian people to account,” he said.

The British measures include a travel ban and asset freeze on eight officials from the Belarusian government, including Lukashenko, son Victor Lukashenko and Igor Sergeenko, the head of the presidential administration. Canada’s list includes Lukashenko and 10 others.

Canadian Foreign Affairs Minister Francois-Philippe Champagne said Canada and the UK acted in concert to ensure the sanctions have a greater effect.

“Canada stands in solidarity with the people of Belarus as they struggle to restore human rights and achieve democracy in their country,” Champagne said.

The British government says Lukashenko is the first leader sanctioned under Britain’s new global human rights sanctions programme, which was introduced in July.

The West has so far sought to tread carefully, balancing sympathy for the pro-democracy movement in Belarus with caution not to provoke Russia. In addition to the UK and Canada, the United States and the European Union regard Lukashenko’s presidency as illegitimate, but he has the backing of longtime ally and Russian President Vladimir Putin.

The EU, which Britain quit in January, has said it will impose sanctions on a list of Belarusian officials but has yet to finalise the list. Some small EU countries near Belarus have announced sanctions without waiting for the bloc to act.

Meanwhile, French President Emmanuel Macron pushed on Tuesday for European mediation in the Belarus political crisis after meeting the ex-Soviet republic’s opposition leader, Svetlana Tikhanovskaya, during a visit to Lithuania.

After the meeting, Tikhanovskaya told reporters that the French leader had
“promised to do everything to help with negotiations, for this political crisis in our country” and had also pledged to help secure the release of political prisoners in Belarus.

Tikhanovskaya went into exile in Lithuania after the Belarusian presidential election.

Macron hoped that EU sanctions against Belarus officials would be adopted at the next EU summit, according to Tikhanovskaya’s adviser, Franak Vyachorko.

“We had a very good discussion. Now we need to be pragmatic and to support Belarus people and we will do all that,” Macron told reporters.

The French leader has previously said Putin was favourable to the Organization for Security and Co-operation in Europe (OSCE) mediating in the Belarus crisis.

But Putin on Tuesday said that Belarus was in a “difficult situation” and was facing “unprecedented external pressure”.

Addressing a forum on the Belarusian and Russian regions, the Russian president said Moscow was ready to stand by Minsk, describing ties as “timeless and all-weather”.

Putin has promised to provide Lukashenko with security assistance if the political crisis worsens and has extended a loan of $1.5bn.

Kremlin spokesman Dmitry Peskov downplayed Macron’s talks with Tikhanovskaya, saying it amounted to a meeting between the “French president and a Belarusian citizen”.

Lukashenko has defied calls that he step down or for outside experts to help mediate the crisis.

Many prominent members of a council formed with the aim of arranging a transfer of power in Belarus have been arrested or have fled the country. The protests have persisted despite daily arrests of demonstrators, including 500 people during rallies last weekend. 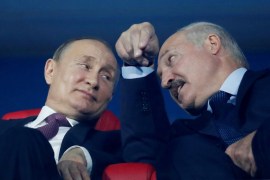 Will Putin and the ghost of the USSR save Lukashenko’s Belarus?

A brief history of Belarus’s rocky relationship with Russia, amid protests that threaten to end Lukashenko’s long rule. 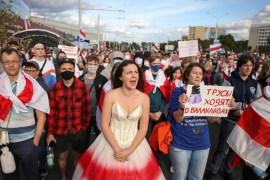 Belarusians will not give up despite the repression

Thousands of Belarusians have been arrested but that will not stop the Belarusian people from demanding freedom. 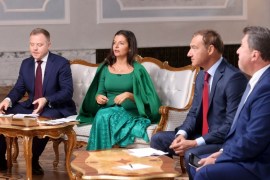 How Russian media is trying to save Lukashenko’s Belarus

Russia-funded networks stand by embattled leader, who in turn uses their outlets to lavish praise on ‘brother’ Putin. 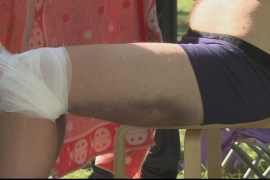