Evidence suggests several chemical additives in plastic products and packaging are poisoning consumers, harming the environment and undermining recycling initiatives, according to a new study, which calls for the development of safer alternatives.

In a report published on Wednesday, the Regional Activity Centre for Sustainable Consumption and Production (SCP/RAC), warned that exposure to even small amounts of harmful plastic chemical additives could result in cancers, damage to immune and reproductive systems, impaired intellectual functions, and developmental delays.

Among the chemicals are flame retardants, perfluorinated chemicals, phthalates, bisphenols, and nonylphenols, which can be found in everyday consumer goods including children’s toys, food packaging, electronics and textiles.

“This report is notable because it identifies hazardous chemical additives in common, widely available products and illustrates how they pose a threat to health and the environment whether in products, in waste, in recycling, landfill, or incineration,” said Dr Sara Brosche of the International Pollutants Elimination Network (IPEN).

From production to incineration

IPEN was involved in the study with UN convention groups, scientific experts, and environment watchdogs.

The study also looked at the adverse effect of the chemicals across all stages of a plastic product’s shelf-life from production to use, recycling, landfill and incineration.

In all stages, the study found chemical additives present in the plastic posed different kinds of hazards to humans, marine life and the air.

For example, the incineration of plastic waste containing toxic dioxin results in the development of ozone-depleting substances and greenhouse gases.

“Now is the time to act on science to reduce plastics’ toxic chemical additives and the pollution in all its forms and to seek sustainable ways in which we can live in harmony with nature,” said Gaetano Leone, a senior official of the UN Environment Programme (UNEP) and expert in the Mediterranean region.

He urged the world to tackle what he called the “plastic pandemic” to address environmental decline.

“Taming the leviathan of plastic litter, which stifles marine life and releases highly hazardous substances in the environment, must become a priority,” he said.

Even the act of recycling plastic could turn out to be counterproductive and harmful to humans, continually exposing people and the planet to hazardous chemicals, the report noted.

Of particular concern is the recycling of plastics that contain POPs, or persistent organic pollutants, many of which are banned or regulated internationally, because of their harmful effect, including the possible development cancer on humans.

In the past, POPs were extensively used in pesticides, which were sprayed on farms, killing pests but also causing extensive soil pollution.

Rolph Payet, another senior UNEP official, said that in order to solve the problem and ensure better management of plastic waste, there should be more transparency on the labelling of plastics, which contain additives.

The report also recommended more investment in the production of new and safer materials, which can be used as alternatives to toxic plastics.

Griffins Ochieng, the head of the Centre for Environment, Justice, and Development in Kenya urged people to better understand how the chemicals from plastic spread to avoid their toxic contamination. 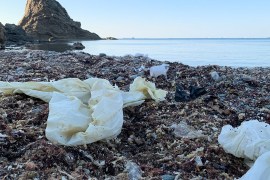 Turkey is awash in plastic waste. Coronavirus could make it worse

Activists question why Turkey is importing plastic from other nations when it struggles to manage waste it produces. 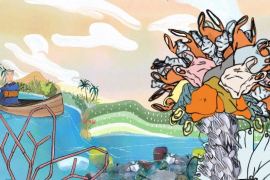 Face masks, gloves and a new breed of plastic pollution

The growing number of single-use masks and gloves found in our environment add to an unprecedented pollution problem. 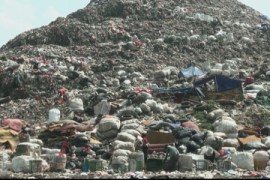 Increased online shopping and takeaway food during the pandemic have added to the mountain of waste in the city.