The losses of Azerbaijan as of 22:00
790 casualties, 180 of which are in Karvachar
Потери Азербайджана по 22:00
790 жертв, 180 из которых в Карвачаре.
Source @arcrunmod pic.twitter.com/5WdrxCBXAE

Turkey denied reports that it sent Syrian fighters to help its ally Azerbaijan fight Armenian forces over the Nagorno-Karabakh region, saying the assertions were part of Armenia’s attempts to create “dark propaganda” about Turkey.

On Monday, the Armenian ambassador to Russia said Turkey had sent around 4,000 fighters from Turkish-controlled northern Syria to Azerbaijan and that they were involved in hostilities in Nagorno-Karabakh.

Qatar’s Emir Sheikh Tamim bin Hamad Al Thani called for calm and for resolving the dispute between the two countries through dialogue and diplomatic means in order to preserves the interests of the two countries, Qatar news agency reported.

16:30 GMT – Putin urges all sides to hold fire in Nagorno-Karabakh during phone call with Armenian PM

Russian President Vladimir Putin urged the opposing sides in the Nagorno-Karabakh conflict to hold their fire, during a conversation with Armenian Prime Minister Nikol Pashinyan, the Kremlin said in a statement.

Putin emphasised the urgent need for a ceasefire and for all sides to take measures to de-escalate the crisis, the Kremlin said.

Armenia and Azerbaijan accused one another on Tuesday of firing directly into each other’s territory and rejected pressure to hold peace talks as their conflict over the enclave of Nagorno-Karabakh threatened to spill over into all-out war.

Armenian prime minister has urged the international community to condemn Azeri and Turkish aggression, saying the existence of the Armenian people is under threat.

Nikol Pashinyan also said talks with Azerbaijan is not possible while military action is taking place on ground.

15:30 GMT – Azerbaijan’s president says there cannot be talks with Armenia

Azerbaijan’s President Ilham Aliyev has rejected any possibility of talks with neighbouring Armenia over the breakaway Nagorno-Karabakh region and said that Yerevan’s demands were unacceptable, Russian news agencies reported.

Aliyev said that Azerbaijan’s ally Turkey was not a party to the conflict and its role in the region was of a stabilising nature.

Twelve Azeri civilians have been killed and 35 wounded by Armenian fire, the Azeri Prosecutor’s Office said.

The statement marked a sharp rise in reported civilian casualties from a flare-up in fighting between Azeri and ethnic Armenian forces over the territory of Nagorno-Karabakh.

“An Armenian SU-25 aircraft has been shot down by a Turkish F-16 warplane … which flew from Azerbaijan’s territory,” Armenian defence ministry spokeswoman Shushan Stepanyan wrote on Facebook, adding that the “Armenian pilot has heroically died”.

“Turkey will be fully committed to helping Azerbaijan take back its occupied lands and to defending their rights and interests under international law,” Fahrettin Altun tweeted, adding that Turkey hoped the UN meeting “will establish a strong foundation for a solution”.

11:15 GMT – Kremlin urges Turkey to work for ceasefire in Nagorno-Karabakh

Russia has urged Turkey to work to bring an end to deadly clashes in the Nagorno-Karabakh separatist region as Ankara has strongly backed Azerbaijan. 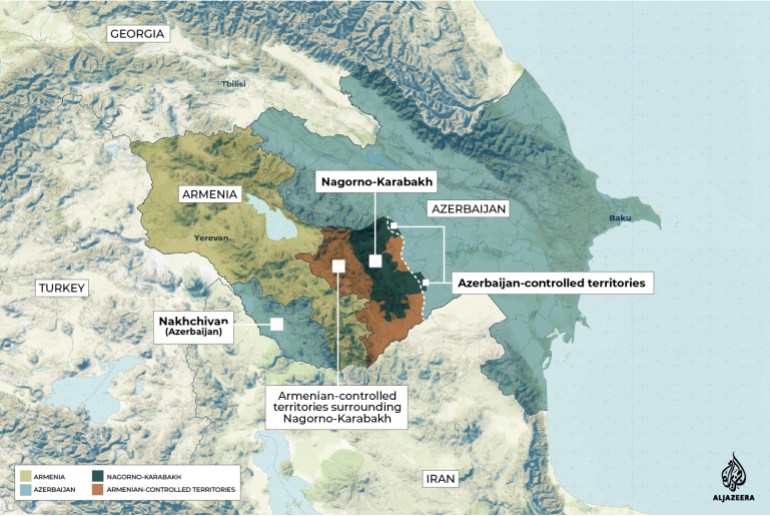 US Secretary of State Mike Pompeo has urged Armenia and Azerbaijan to cease hostilities as clashes continued over the breakaway Nagorno-Karabakh region.

“The foreign minister and I addressed the conflict in Nagorno-Karabakh where both sides need to stop the violence and work with the Minsk Group co-chairs and return to substantive negotiations as quickly as possible,” he said, alongside his Greek counterpart during a visit to Crete.

A civilian was killed in the Armenian town of Vardenis after it was shelled by Azeri artillery and targeted in a drone attack, Armenia’s foreign ministry said, the first casualty on Armenian soil since fighting broke out in Nagorno-Karabakh.

Armenia and Azerbaijan accused each other on Tuesday of firing into each other’s territory, far from the conflict zone in the breakaway Azeri region backed by Yerevan, as the worst spate of fighting since the 1990s raged for a third day.

France has said that it would call for talks among the Minsk Group – which is led by Russia, France and the United States and mediates between Armenia and Azerbaijan – to try to resolve an escalating conflict between the two South Caucasus countries.

“We will trigger in the coming days a co-ordination of the Minsk Group to clear up what happened, who is responsible and find a way out,” an official at Macron’s office told Reuters on Tuesday.

Iranian Foreign Ministry spokesman Saeed Khatibzadeh has denied reports that Iranian soil is being used to transfer arms and military equipment to Armenia.

“While supervising and controlling transportation of goods to other countries, the Islamic Republic will by no means allow our soil to be used to move arms and ammunition,” he said during a news conference, adding that any trucks crossing borders are as usual carrying “conventional, non-military goods”.

German Chancellor Angela Merkel has called for an “immediate” end to the fighting in the region of Nagorno-Karabakh in phone calls with the leaders of Armenia and Azerbaijan, her spokesman said.

“The chancellor urgently called for an immediate ceasefire and a return to the negotiating table,” Steffen Seibert said.

Merkel spoke with Armenian Prime Minister Nikol Pashinyan on Monday and with Azerbaijani President Ilham Aliyev on Tuesday, he added.

Azerbaijan President Ilham Aliyev said that 10 Azeri civilians had been killed since fighting with Armenian forces began on Sunday over the breakaway region of Nagorno-Karabakh, the Interfax news agency reported.

Armenian and Azeri forces have accused each other of firing at border positions and civilian settlements in Nagorno-Karabakh, in some of the worst fighting since the 1990s.

“I don’t even want to imagine in my mind what can happen.”

Fierce fighting between Azerbaijan and Armenia has escalated further, killing at least 26 more soldiers in the breakaway region of Nagorno-Karabakh with fears that clashes could turn into a full-scale war. pic.twitter.com/wNwS9Emp6z

Azeri state energy company SOCAR has said that the country’s oil infrastructure was being guarded by the army amid fighting with ethnic Armenian forces over the breakaway region of Nagorno-Karabakh, Interfax news agency reported.

Azeri armed forces opened fire on an Armenian military unit in the border town of Vardenis, and miles away from the breakaway Nagorno-Karabakh region which has been the focus of clashes in the past few days, the Armenian defence ministry said.

A civilian bus caught fire after being hit by an Azeri unmanned drone, it said in a statement.

Separately, Armenia denied an earlier report by Azerbaijan’s defence ministry that the Armenian army had shelled the Dashkesan region on the border between the two countries

Armenian and Azeri forces have deployed heavy artillery in the latest fighting over Nagorno-Karabakh, both sides said.

The Azeri defence ministry said the opposing forces attempted to recover lost ground by launching counter-attacks towards Fuzuli, Jabrayil, Agdere and Terter and that there was fighting around Fizuli city on Tuesday morning and the Armenian army shelled the Dashkesan region on the border between the two countries, miles away from Nagorno-Karabakh.

Armenia denied shelling Dashkesan, but reported fighting throughout the night and said that Nagorno-Karabakh’s army repelled attacks from several directions along the line of contact.

Nagorno-Karabakh said 53 of its soldiers had been killed in fighting with Azeri forces.

It also said it had recovered some lost territory on Sunday, but its leader later said neither the Azeri army nor the Armenian military captured any tactical positions during the fighting on Monday.

He said the Azeri army had started a significant attack towards Matagis and Talish.

The Organisation of Islamic Cooperation (OIC) has condemned Armenia’s “aggression” against Azerbaijan and called for a political solution to the conflict between the two countries.

Renewing its solidarity with Azerbaijan, the organisation said it was deeply concerned and was monitoring several of Armenia’s attacks on its eastern neighbour and “violating the ceasefire and leaving behind civilian casualties”.

“It (the OIC) calls for the full and unconditional withdrawal of Armenian forces from the occupied Azeri territories and for dialogue to reach a political solution to the conflict between the two countries based on respect for the sovereignty and territorial integrity of the Republic of Azerbaijan, and the inviolability of its internationally recognized borders,” the OIC statement said.

You can read the updates from September 28 here.