A large majority of Swiss voters have rejected by a 63-37 percent margin a right-wing party’s proposal to annul a pact with the European Union allowing the free movement of people, broadcaster SRF has projected.

Nearly 5.3 million voters were eligible to vote on Sunday to decide whether to annul the pact with the EU in an important test of attitudes towards foreigners who make up a quarter of Switzerland’s population.

Opinion polls had found most voters opposed the plan, which would have given non-EU member Switzerland unilateral control of immigration but severely disrupted ties with the EU, the country’s biggest trading partner.

The right-wing Swiss People’s Party (SVP) – the biggest in the parliament – led the charge for Sunday’s referendum to take back control of immigration, echoing some of the arguments pro-Brexit politicians used in the run-up to Britain’s exit from the EU.

A gfs.bern poll had found that 63 percent of respondents opposed the SVP proposal and 35 percent supported it, suggesting voters wanted stability at a time of economic uncertainty during the coronavirus pandemic.

Opponents said the plan would rob businesses of skilled workers and torpedo accords that enhance Switzerland’s access to the bloc’s single market.

Citizens of the EU plus Iceland, Norway and Liechtenstein, which with Switzerland are members of the European Free Trade Association (EFTA), made up 68 percent of the 2.1 million resident foreigners in the country in 2019. More than 450,000 Swiss citizens live in the EU.

While not an EU member, Switzerland is bound to the bloc through an array of intricately connected bilateral agreements.

Ending free movement from the EU was likely to topple other bilateral pacts on land and air transport, procurement, technical barriers to trade, and research.

If the SVP initiative passes, authorities would have had one year to negotiate an end to the 1999 agreement on the free movement of people between Switzerland and the bloc. 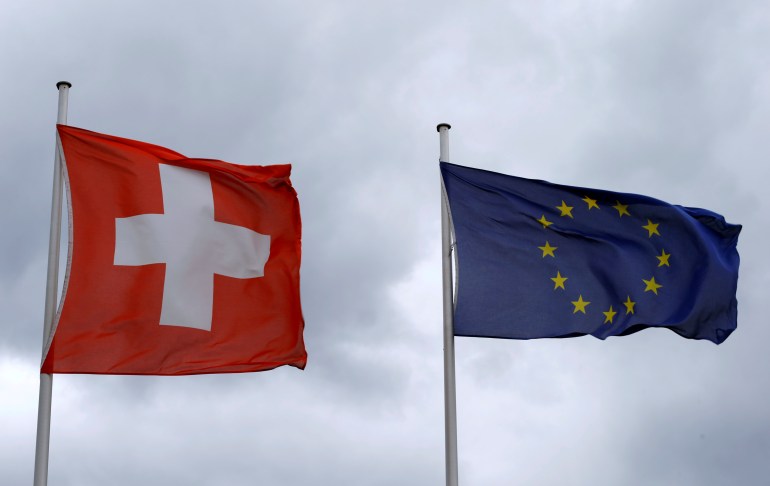 The proposal goes even further than a similar measure, also backed by the SVP, that narrowly passed in February 2014, demanding that Bern impose quotas on the number of work permits issued to EU citizens.

That vote threw Swiss-EU relations into disarray, with Brussels warning that any curbs on immigration by EU citizens would put a whole range of bilateral agreements at risk.

Bern struggled for years to find a way to respect the vote without permanently alienating EU neighbours.

After lengthy talks, an agreement reached in late 2016 stopped far short of an initial quotas plan, which Brussels had fiercely rejected.

Instead, Bern opted merely to require Swiss employers to jump through a few bureaucratic hoops before hiring from the bloc, and to prioritise Swiss job seekers, at least ostensibly.

The SVP condemned that compromise as a “betrayal” and launched its new initiative.

Votes on the SVP’s initiative and several other issues had been scheduled to take place in May but were postponed as coronavirus lockdown measures prevented campaigning.