Washington, DC – Few people in the United States may have heard the name Amy Coney Barrett before this week.

But in conservative legal circles, US President Donald Trump’s pick to fill the vacancy on the US Supreme Court has made a name for herself as a brilliant academic with a sharp legal mind.

Barrett, 48, came to national prominence in 2017 when she was pulled from her post as a law professor at the University of Notre Dame and named to the US Court of Appeals for the Seventh Circuit.

Barrett had never served as a judge before Trump nominated her to the appeals court, a major position in the US judiciary. The Seventh Circuit hears cases arising from seven federal court districts in Illinois, Indiana and Wisconsin, three states in the American Midwest.

That combination of academic and appellate work put Barrett on a fast track to the US Supreme Court. When Trump nominated Justice Brett Kavanaugh for a seat in 2018, Barrett was already on his short list of candidates.

Barrett is a graduate of Notre Dame Law School, where she was editor of the law review and finished first in her class in 1997.

She clerked at the US Court of Appeals for the DC Circuit and then the Supreme Court after law school. She also practised law at a private firm in Washington, DC, for three years before returning to Notre Dame in 2002 to teach.

Barnett’s affiliation with conservative Supreme Court Justice Antonin Scalia and her academic writings made her a darling of the right-wing Federalist Society, a group that has funneled more than 200 conservative jurists to the federal courts under President Trump.

On Saturday, Barrett said that Scalia’s “judicial philosophy” was hers, as well. “Judges must apply the law as written. Judges are not policy makers,” she said.

The debate over Barrett’s confirmation to the Supreme Court is already proving to be highly polarised, with left-wing groups saying they fear she will dismantle abortion rights and healthcare.

Most of the fight in the US Senate will be over the process and circumstances of Barrett’s selection, not her legal acumen or qualifications, although – to be sure – her views on abortion, guns and healthcare will be in the spotlight.

Democrats have slammed Trump and Republican leaders for moving to push the nominee through ahead of the November 3 presidential contest, saying the winner of the election should be the one to choose the next justice.

Many leading Democrats came out in opposition to Barrett’s nomination, saying they fear she will dismantle former President Barack Obama’s Affordable Care Act.

But there are signs that the tone – at least among legal experts – may be more civil than the 2018 controversy over Kavanaugh’s confirmation, an admittedly low standard.

Harvard Law School professor Noah Feldman, a liberal constitutional scholar who advocated for Trump’s impeachment before the House Judiciary Committee, wrote in a Bloomberg opinion article that Barrett has the qualifications to be on the Supreme Court.

“I got to know Barrett more than 20 years ago when we clerked at the Supreme Court during the 1998-99 term. Of the 30-some clerks that year, all of whom had graduated at the top of their law school classes and done prestigious appellate clerkships before coming to work at the court, Barrett stood out,” Feldman wrote.

I’ve said from the beginning that Senator McConnell should follow his own precedent from 2016: This vacancy should be filled by the winner of the ongoing election.

I intend to follow that precedent and will not support anyone’s confirmation until we know the election results.

“To add to her merits, Barrett is a sincere, lovely person. I never heard her utter a word that wasn’t thoughtful and kind – including in the heat of real disagreement about important subjects. She will be an ideal colleague,” he said.

Barrett is a disciple of the relatively new school of constitutional jurisprudence called “originalism”, in which scholars and judges try to interpret the original intent of the framers of the US Constitution as well as the meaning of their words.

Barrett is believed to oppose abortion, although she sidestepped questions about the topic in her 2017 Senate confirmation hearing. The landmark 1973 Supreme Court case Roe v Wade established a woman’s right to an abortion and that right has been affirmed by subsequent rulings.

At issue now is the degree to which states can regulate the right as a healthcare service.

Women’s advocacy groups, among others, fear seating Barrett on the court would create a 6-3 conservative majority that would roll back those prior rulings.

Barrett also is likely to be more sceptical of gun control measures, but also deferential to the will of the legislative branch, Barnett said.

Barrett is married to Jesse M Barrett, a former assistant US attorney in South Bend, Indiana, and a fellow Notre Dame law graduate. They have seven children including two adopted from Haiti.

The New York Times has reported that Barrett is a member of a Christian group called People of Praise, a non-denominational group of Catholics, Protestants and others. The group of about 1,700 people was founded in South Bend in 1971 and adheres to a traditional Christian covenant. 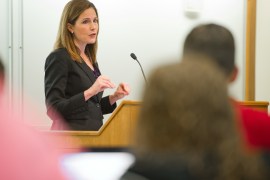 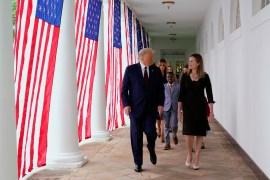 If confirmed, US President Donald Trump’s pick will swing the country’s highest court to a 6-3 conservative majority. 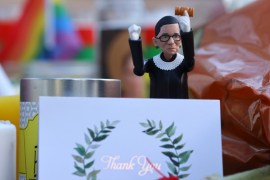