Authorities in Turkey have issued arrest warrants for 82 people, including an opposition party mayor, over protests six years ago.

The warrants relate to October 2014 protests in Turkey sparked by the seizure of the mainly Kurdish Syrian town of Kobane by the ISIL (or ISIS) armed group.

Ankara accused officials of the pro-Kurdish Peoples’ Democratic Party (HDP) of urging people to take part in the protests across Turkey that left 37 dead. The HDP blamed Turkish police for the violence.

In a statement on Friday, the Ankara chief public prosecutor’s office said police were on the hunt for the suspects in the Turkish capital and six other provinces.

“The Ankara Prosecutor’s Terror Crimes Investigation Bureau has launched an investigation on the PKK terrorist organisation and its so-called executives, as well as certain political party executives and members … and, at the current stage, ordered the detention of 82 suspects,” the office said.

The government accuses the HDP of having links to the outlawed Kurdistan Workers’ Party (PKK). The HDP denies the links.

The prosecutor’s office did not specify what offences the suspects were alleged to have committed.

The arrest warrants included the mayor of the northeastern Kars province, Ayhan Bilgen, former MP Sirri Sureyya Onder and HDP party executives, some of whom had already been detained.

Bilgen won last year’s local elections representing HDP, which is the third-largest party in the parliament. Onder used to represent the HDP in parliament.

Of a total of 65 HDP mayors elected in 2019 elections, 47 have now been replaced by unelected officials, and some have been imprisoned on “terrorism” charges, the party said last month.

The PKK, designated a “terrorist” group by Turkey, the United States and European Union, has fought against the state in the southeast since 1984. A ceasefire collapsed in 2015. 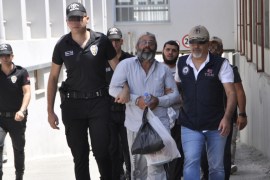 Turkey says it has arrested top ISIL figure in raid

Interior minister says Mahmut Ozden had been receiving orders from Iraq and Syria to ‘carry out an attack in Turkey’.