Retired colonel and former defence minister Bah Ndaw has been sworn in as Mali’s interim president, more than a month after a military coup overthrew embattled leader Ibrahim Boubacar Keita.

Coup leader Colonel Assimi Goita was also sworn in as the vice president of the transition during a ceremony on Friday held in the capital, Bamako.

Ndaw’s appointment was announced earlier this week by Goita. The interim president will rule for a maximum of 18 months before staging nationwide elections.

Ndaw, 70, also served as defence minister in 2014 and previously headed the air force. He took the oath of office in front of several hundred military officers, political leaders and diplomats.

Described by former colleagues as “principled”, Ndaw said in a speech he would crack down on corruption, one of the main complaints against Keita’s government, and stamp out abuses by Mali’s armed forces against civilians.

“Mali has been shaken, trampled on and humiliated by its own children, by us,” he said, wearing a long white robe and a blue surgical mask.

Ndaw said he would strive for “a stable, calm and successful transition, in the agreed conditions and timeframe” and also promised to uphold Mali’s international commitments.

“The transition period which begins will not dispute any international undertaking by Mali, nor the agreements signed by the government,” Ndaw said.

Following the August 18 coup, the Economic Community of West African States (ECOWAS) regional bloc suspended Mali from its decision-making institutions, shut borders and halted financial flows in an attempt to push for a swift return to civilian rule.

The bloc’s leader, Jean-Claude Kassi Brou, said on Friday that the sanctions “will be lifted when a civilian prime minister is named”.

Reporting from Dakar in neighbouring Senegal, Al Jazeera’s Nicolas Haque said Ndaw is supposed to represent the population, 60 percent of which are under the age of 25 and haven’t been in schools while hospitals are underfunded.

“That’s the concern for many Malians. To see this return of trust between the Malian people and the leadership, that is the challenge ahead.

Mali’s neighbours took a hard line with the military government, fearful that the unconstitutional transfer of power may set an example for their countries and undermine international efforts to contain a worsening security crisis in the country at the heart of the fight against armed groups in the Sahel region.

Large parts of Mali already lie outside of government control due to a lethal armed uprising that first emerged in 2012 and has also inflamed ethnic tensions.

In the weeks leading up to the coup, tens of thousands of opposition supporters had taken to the streets to demand Keita’s departure, protesting against a disputed parliamentary election, persistent economic woes, corruption and the failure to address the escalating violence.

Jean-Herve Jezequel, project director for the Sahel at the Crisis Group, said it was “very hard to tell” whether the new leadership could succeed where previous administrations had failed.

“They have indicated they are very willing to address the deeper social problems of Mali,” he told Al Jazeera, noting that the country was facing both security and governance issues.

“Everybody wonders if military people are best positioned in issues of governance. An additional issue is that Mali has a lot of issues related to the Sahel, with ECOWAS closing the borders. Many donors are unable to continue funding many of the projects,” he said.

“Will they have the money, the resources to address the deep structural issues of Mali? That is a tough question.”

Following the announcement on Monday about Ndaw heading the transitional government, Yvan Guichaoua, a Sahel expert at the University of Kent’s Brussels School of International Studies, described the new leader as “a lesser-known figure with a reputation of decency” and whose profile “looks acceptable by the domestic political forces and the international community”.

“The ECOWAS wanted a civilian president and Ndaw meets this criterion, even though he is retired military,” he told Al Jazeera. “We’re now getting closer to having a functional institutional architecture able to govern Mali, in which the junta will, in any case, remain highly influential.” 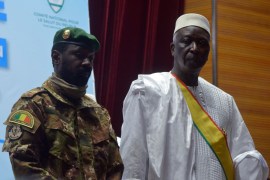 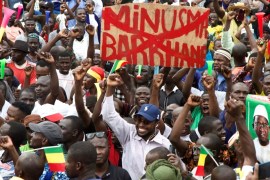 At 60 and with new rulers, Mali once again at a crossroads 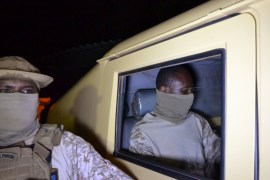 What does the coup mean for Mali’s spiralling security crisis?

Amid the political upheaval, the complex and escalating violence in Mali’s north and centre remains a constant threat.