Islamabad, Pakistan – Pakistan’s main opposition parties have united to launch a new movement against the government of Prime Minister Imran Khan and the involvement of the country’s powerful military in politics, a move that analysts say has limited chances of achieving success.

The six parties and some smaller organisations, signed a declaration announcing the formation of the “Pakistan Democratic Movement” (PDM), aimed at holding countrywide protests from next month.

“The [military] establishment should stop every kind of interference in politics forthwith,” said the declaration, which also accused Prime Minister Khan of failing to govern effectively.

They reiterated allegations that the military had rigged the 2018 election to help Khan’s Pakistan Tehreek-e-Insaf (PTI) party score victory.

Also raised was the question of a reinvigorated anti-corruption “accountability” process since Khan came to power, which has seen the elder Sharif convicted in two cases and currently in self-imposed exile in London, Zardari arrested (he is currently out on bail) and numerous other opposition figures facing trial or imprisonment.

Khan, who remains widely popular and was elected on a platform of wiping out corruption, has remained the subject of consistent allegations that the accountability process has been biased, with members of his PTI party spared.

“The [anti-corruption watchdog] seems reluctant in proceeding against people on one side of the political divide […] while those on the other side are being arrested and incarcerated for months and years without providing any sufficient cause,” read a Supreme Court verdict in a corruption case in July.

On Sunday, Nawaz Sharif, speaking for the first time since he left the country on medical bail last November, singled the military out for particular criticism.

“It is saddening that the situation has escalated to the level where we now have a state above the state,” said Sharif via a video link from London.

“Either we have martial laws in the country or a strong parallel government is created whenever we have a civilian government. Our foremost priority is to get rid of this non-representative, incapable and selected government.”

Pakistan’s military has directly ruled the country for roughly half of its 73-year history, and retains control over major aspects of foreign and security policy.

Under Khan, it has taken an increasingly active role in working with the civilian government on other aspects of governance, including managing the economy and supervising the implementation of the $60bn China-Pakistan Economic Corridor (CPEC).

Analysts are sceptical that the latest attempt by the opposition to form a united front against Khan will lead to much.

“I find that it lacks a coherent purpose, outside of securing certain freedoms and privileges for the senior leaders of these parties,” says Mosharraf Zaidi, a political analyst and founder of the Tabadlab think-tank. “It’s hard to see what the payoff for the Pakistani people is.”

Hasan Askari Rizvi, a political analyst who served as a senior official during the 2018 polls, says the movement will likely involve more rhetoric than action.

“Our experience is that political parties are more united when it comes to sloganeering and rhetoric but when it comes to implementing those things that they have announced, then the individual interests of the parties dominate their disposition,” he says.

Rizvi gives the example of the question of the opposition parties resigning from parliament and the provincial assemblies as a form of protest, an issue that was raised at Sunday’s conference but not settled conclusively.

Owais Tohid, a journalist and political analyst, says the timing of the launch of the PDM must also be considered.

“The move to launch a countrywide protest campaign against Imran Khan’s government is also an attempt to start a political movement before the elections of the upper house of parliament in March 2021,” he says.

“The opposition, in their circles, I see not only frustration but also a realisation that if the present government of Imran Khan gets a majority in the upper house of parliament [as expected], then they believe that they are doomed for another few years.”

On Tuesday, federal minister Sheikh Rashid, a key ally of Prime Minister Khan’s PTI, revealed that a meeting had been called by the country’s army chief General Qamar Javed Bajwa, accompanied by the head of the Inter-Services Intelligence (ISI) agency, to address opposition leaders on September 16, four days before the opposition conference.

The agenda of the meeting was a proposal to change the legal status of the northern territory of Gilgit-Baltistan, but, Rashid told Al Jazeera, domestic politics was also bluntly discussed.

“They discussed everything, including the current situation,” Rashid said. “Categorically, the chief of army staff said that we are not interested in taking part in any politics, this is your job and you have to do it yourself.”

The PML-N, by design, has two poles that it presents to ensure the widest possible appeal, both domestically and internationally

Two members of the PML-N who were in the meeting confirmed that it took place, the names of the participants and that it was not disclosed to the media at the time. They disputed that there had been any substantive conversation about domestic politics, however.

Analysts say the fact that the opposition attended the meeting days ahead of lambasting the military for its “interference” in politics undercuts the legitimacy of their criticism.

“Pakistani politics is facing a quagmire,” says Tohid. “When they raise slogans of upholding civilian supremacy, at the same time they also look towards [the army headquarters] and the establishment [for support]. That’s a major contradiction.”

Tohid points to an example from Sharif’s last tenure as prime minister, one that the former premier himself raised in his speech on Sunday.

In 2016, the national newspaper Dawn published a story on its front page detailing Sharif’s opposition in a top-secret National Security Committee meeting to the military’s alleged backing of anti-India armed groups. In his speech on Sunday, Sharif referenced the episode, terming the ensuing backlash “a conspiracy” to unseat his government.

“[But] it was Sharif who sacked then-Information Minister Pervez Rashid and the special adviser on foreign affairs, Tariq Fatemi [after that incident],” says Tohid.

“If he had raised it then and there, it would be a different story altogether. But once you are in power, your norms and values are different.”

Zaidi believes attendance at the meeting touches on a “foundational issue” in how power functions in a country ruled for decades by its military.

“Pakistan’s opposition and treasury benches yearn for face-time with the military and the intelligence community, particularly the top leadership,” he says. “Is it normal for a country to have a political leadership that looks to the military for approval? Whether in government or outside?

Zaidi also argues that for the PML-N to have taken sharp aim at the military through Nawaz Sharif’s speech, while also engaging with the institution, is consistent with how the party has historically maintained power.

“The PML-N, by design, has two poles that it presents to ensure the widest possible appeal, both domestically and internationally,” he says.

“It suits the PML-N to have this diversity of views represented within the party. I don’t see any reason at all for that change in any way. When you have your cake and eat it too, why settle for one position?”

Since coming to power, Khan’s government has battled an ongoing economic crisis which has seen the country turn to the International Monetary Fund (IMF) for a $6bn loan, in addition to numerous bilateral arrangements with China, Saudi Arabia and the United Arab Emirates to stave off possible sovereign default.

The government has also failed to deliver on governance promises, say analysts.

“Until February, until the COVID-19 crisis really emerged as the main governance challenge, the economic performance of this government was catastrophic and it seemed difficult for the government to sustain any narrative of success in the face of such a stark economic crisis,” says Zaidi.

That is a view shared by others, who believe the economy, and not the opposition, is Khan’s biggest threat.

“The biggest challenge the present regime is facing is on governance and on delivery,” Tohid says. “No doubt that they have inherited an economic burden on their shoulders, but they are struggling to [fix it]. They don’t face a threat from the opposition rather they are faced with threats from within.”

Owais Tohid, a senior journalist and a political analyst

Khan’s handling of COVID-19, however, has to a great extent papered over public criticism of his government’s performance in its first two years.

Pakistan has seen more than 300,000 cases of COVID-19, but there have been far fewer deaths than in other countries, with at least 6,529 recorded as of Wednesday, according to official data.

Other than during one week in June, Pakistan’s rickety healthcare infrastructure has also not reached critical occupancy levels, a success the government credits to its “smart lockdown” approach.

The relative success on COVID-19, say analysts, has given the government some room to breathe.

“If the government is able to continue to stave off the plunging of the economy into a deeper crisis, and certainly if it is able to generate higher than expected growth in the next 12 to 24 months, the opposition will have very little going for it,” says Zaidi.

For Tohid, ultimately the backing of the military will determine Khan’s fate, and with numerous domestic and regional challenges, he sees no reason for that backing to shift.

“[The military] is prioritising the idea of keeping this unprecedented partnership intact,” he says. 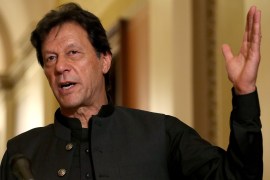 Pakistan’s PM: Our economic future is now linked to China 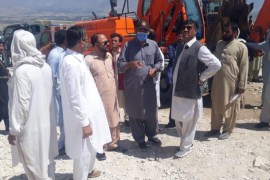 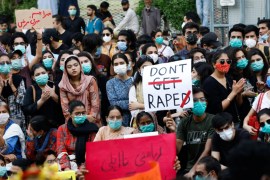 Police announce the arrest of a second man in connection with the rape of a woman on a popular highway last week. 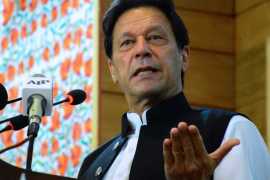 Al Jazeera meets families of girls kidnapped in Pakistan who are forced to marry and convert to Islam.