Louisville, Kentucky – Demonstrators and activists in Louisville, Kentucky, have promised to continue their fight for justice after a grand jury decided not to indict any of the police officers involved in the fatal shooting of Breonna Taylor, an unarmed Black woman, on murder charges.

Chanting, “Say her name” and “No justice, no peace”, hundreds of protesters on Wednesday took to the streets of Louisville, where a state of emergency was declared ahead of the grand jury announcement.

While the panel brought no charges for Taylor’s killing, it did indict former officer Brett Hankison on three counts of “wanton endangerment”, accusing him of blindly firing into her neighbours’ apartments. Each count carries a jail term of up to five years.

Sergeant Jonathan Mattingly and Officer Myles Cosgrove, who also fired their weapons, were not charged.

Protesters and the lawyers for Taylor’s family said the charges were not enough.

“Make no mistake, we will keep fighting this fight in Breonna’s memory, and we will never stop saying her name,” the lawyers said in a statement.

Prior to the grand jury decision, much of the city’s downtown was placed in a virtual lockdown, with police erecting barricades and blocking the streets to traffic. Some protesters instead marched down a prominent Louisville street in an area that was not cordoned off. Police quickly declared an “unlawful assembly”, saying some demonstrators had damaged nearby businesses.

As police helicopters buzzed low overhead, officers dressed in riot gear stopped the marchers by using chemical irritants and wrestling some people to the ground.

At least 127 people were arrested across Louisville, a police spokesperson said Thursday morning. Two officers were shot and wounded about half an hour before a 9pm curfew took effect Wednesday. Louisville Interim Police Chief Robert Schroeder  had said in a Wednesday news briefing that the officers were being treated at area hospitals and both were expected to recover. Schroeder added that a suspect was in custody.

Police used pepper balls on the small group of protesters that remained in the city centre after the curfew, and the area was mostly cleared by the early hours of Thursday.

‘They were all firing blindly’

Renee Pruitt of Louisville, who lived in Taylor’s apartment building and was there the night she was killed, said the charges against Hankison were far too light.

She said she and her children could have been killed.

“They were all firing blindly,” Pruitt told Al Jazeera as she stood near a shrine of flowers, candles and notes on Taylor’s patio.

Kentucky Attorney General Daniel Cameron said the three officers had fired 32 shots in the early hours of March 13 in response to a single round fired by Taylor’s boyfriend, who has said that he mistook police for intruders when they broke down the door while they were sleeping.

The officers, conducting a narcotics investigation, were serving a “no-knock” search warrant.

Cameron said evidence showed that despite the warrant, the officers knocked and announced their presence. But Taylor’s boyfriend, Kenneth Walker, has previously said that he did not hear the officers’ announcement before they burst into the apartment.

Benjamin Crump, the Taylor’s family lawyer, tweeted: “How ironic and typical that the only charges brought in Breonna Taylor’s case were for shots fired into the apartment of a white neighbor, while no charges were brought for the shots fired at Bre or into her Black neighbor’s apartment.”

Kentucky Governor Andy Beshear and other city leaders demanded Cameron release more evidence from the case, including the ballistic reports.

The protests and anger in Louisville echoed across the United States, with Chicago bracing for possible unrest as its governor decried the decision as unjust.

Criticism also poured out on social media, including from national politicians and celebrities such as House Speaker Nancy Pelosi and actress Viola Davis.

Oprah Winfrey, who had erected billboards in Louisville demanding the officers be charged, tweeted about Taylor’s mother, saying, “My heart goes out to Tamika Palmer, who has to be reminded, again and again, that her ‘baby won’t be coming through that door.’”

Joe Biden, the Democratic presidential nominee, said in a statement: “We mourn with [Taylor’s] mother, family, and community and ask ourselves whether justice could be equally applied in America.”

He noted that a federal investigation is continuing.

Back in Louisville, with the city centre mostly emptied and barricaded after the declaration of a state of emergency, activists who have held nearly 120 days of protests promised to continue their fight.

Some said they would push the city to fire all officers involved and seek more police reforms.

Shameka Parrish-Wright, a prominent figure in the city’s racial justice demonstrations, said she wants to push for a statewide ban on “no-knock” warrants and for protests to continue.

But following the decision, activists were still mapping an exact path forward.

“We’re trying to figure out what we’re going to do. But nobody has any answers. When our judicial system and our elected officials fail us over and over again, and we have state-sanctioned murder, nobody has the answer,” she said.

While the city has enacted several police reforms and settled a civil lawsuit with the family for $12m, she said Wednesday’s decision reinforces that justice is still elusive for many Black Americans.

“At the end of the day, it was about three white people living next to her who could have been hit by a gun. That wasn’t justice for Breonna Taylor,” she said. 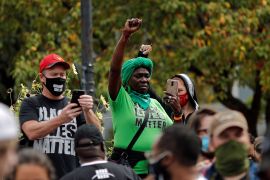 Violence flares after grand jury decides not to recommend manslaughter or murder charges in 26-year-old’s killing. 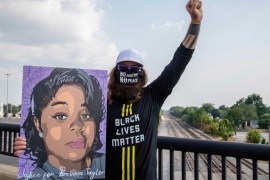 The settlement is believed to be the largest sum paid by Louisville for police misconduct and includes police reforms.