Rescuers battled rain and cramped conditions to scour through rubble and look for possible survivors as the toll from an apartment building collapse on the outskirts of Mumbai rose to 35, a senior government official said on Wednesday.

“It’s been more than three days, so we don’t know if there are any survivors any more, but we are not losing hope,” Satya Pradhan, the head of the National Disaster Response Force, told Reuters.

At least eight people are still missing and rescue personnel are clearing debris to look for them, said Pradhan.

The three-storey residential building in the congested Bhiwandi area collapsed early on Monday while most residents were asleep. More than 60 people were estimated to be in the building at the time.

Television showed a pile of rubble with rescuers climbing ladders to get to anyone still inside and deploying dogs to search for survivors.

Rescue operations, aided by sniffer dogs, have been continuing with the help of the NDRF, but have been hampered by rain and a narrow entrance to the alley. This has prevented heavy equipment from being brought in to clear debris.

Such disasters are common in India during the monsoon season, as torrential rains can destabilise old and often illegally constructed buildings.

This week’s collapse however, is one of the worst such incidents in recent years around Mumbai.

Last month, more than a dozen people were killed when a building collapsed in the industrial town of Mahad, 165km (100 miles) south of Mumbai.

In 2013, more than 120 people were killed in two separate building collapses around Mumbai. 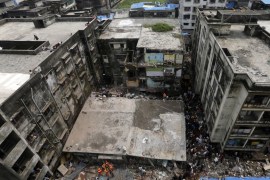 Officials say more bodies could be under the rubble of the building as rescue operation continues in Bhiwandi. 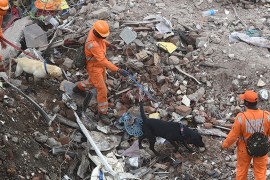 Two killed and up to 70 people feared trapped after five-storey apartment block comes down in Maharashtra state.