United States Senator Edward Markey of Massachusetts defeated US Representative Joe Kennedy III in Tuesday’s hard-fought Democratic primary, harnessing support from progressive leaders to overcome a challenge from a younger rival who is a member of America’s most famous political family.

It was the first time a Kennedy has lost a race for Congress in Massachusetts.

Markey appealed to voters in the deeply Democratic state by positioning himself as aligned with the liberal wing of the party. He teamed up with a leading progressive, New York Representative Alexandria Ocasio-Cortez, on the Green New Deal climate change initiative – and at one point labelled Kennedy “a progressive in name only”.

That helped Markey overcome the enduring power of the Kennedy name in Massachusetts. The 39-year-old congressman sought to cast the 74-year-old Markey as someone who is out of touch after spending decades in Congress, first in the House before moving to the Senate.

At a victory celebration in his hometown of Malden, Massachusetts, Markey ticked off a series of priorities, from support for the Black Lives Matter movement to a call for Medicare for All, to combating climate change, a signature issue for Markey.

“Every other problem is linked to it. No solution to any challenge will be successful unless we address it. There will be no peace, no justice and no prosperity unless we stop the march to climate destruction,” he said. “We must pass a Green New Deal.”

To make good on those pledges, Markey said Democrats have to take back control of the US Senate and overthrow President Donald Trump in November.

“He is the most corrupt, most racist, most incompetent president in American history,” Markey said. “We must banish his agenda of division and destruction to the history books.”

Earlier on Tuesday evening Kennedy said while the results are not the ones he had hoped for, he would work for Markey’s re-election.

“The senator is a good man. You never heard me say otherwise,” Kennedy told supporters at an outdoor rally.

In the waning weeks of the campaign, Kennedy leaned into his family’s long political legacy in Massachusetts. His pedigree includes former President John F Kennedy (JFK); former US Senator and US Attorney General Robert F Kennedy, his grandfather; and former US Senator Edward Kennedy, who held a Senate seat in Massachusetts for nearly half a century until his death in 2009. 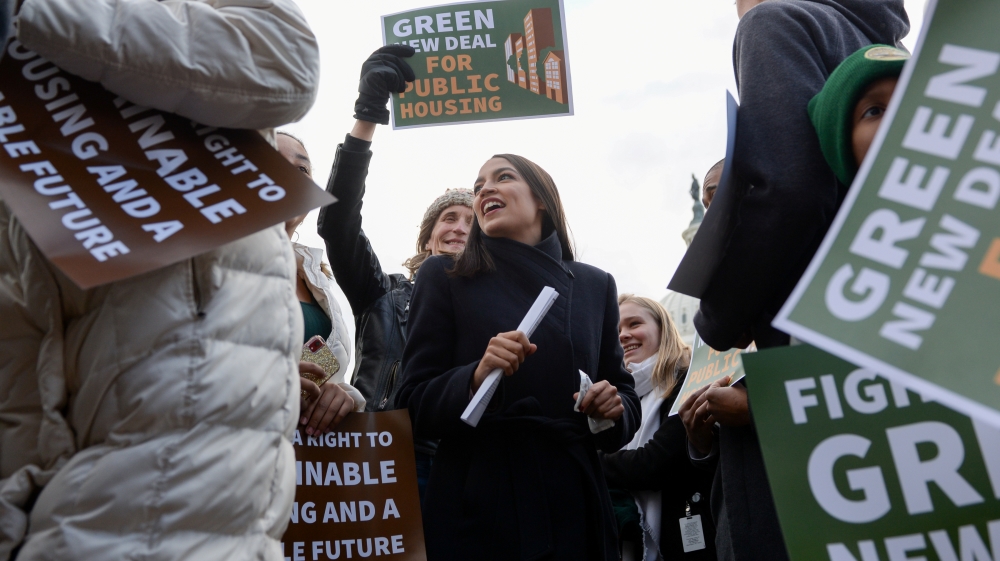 Representative Alexandria Ocasio-Cortez announcing the introduction of public housing legislation as part of the Green New Deal in Washington, US [File: Erin Scott/Reuters]

Markey countered by leaning into his own family story – growing up in the working-class city of Malden with a father who drove a truck for the Hood Milk company.

In one campaign video, Markey also paraphrased a famous JFK quote, saying: “We asked what we could do for our country. We went out, we did it. With all due respect, it’s time to start asking what your country can do for you.”

Markey also was not shy about talking about the Kennedy family, at one point pressing Kennedy to tell his father – former US Representative Joe Kennedy ll – to stop supporting a political action committee that was running ads against Markey.

“I’m sure your father is watching right now,” Markey said. “Tell your father right now that you don’t want money to go into a super PAC that runs negative ads.”

Kennedy said he had “no idea” if his father was helping fund the PAC.

While Markey, who served with Pelosi in the House for decades, congratulated Kennedy, Pelosi’s decision angered some of Markey’s younger progressive supporters. Markey had earlier won the endorsement of Ocasio-Cortez and fellow Massachusetts Democratic US Senator Elizabeth Warren.

On a personal note, when I first got to Congress the reception I got in many spaces was v chilly.

It‘s great to watch him overcome the odds and win tonight. https://t.co/lFjlu4AUiQ

The coronavirus upended the way both candidates could campaign – limiting more traditional means of electioneering like knocking on doors, shaking hands or holding big rallies.

Instead, the campaigns were largely waged online with virtual rallies, virtual endorsements, virtual fundraisers and virtual roundtable events to discuss issues. Eventually, as Massachusetts began to suppress the virus and emerge from a near lockdown, the candidates began to take their campaigns on the road with social distancing and face masks.

The showdown drew criticism from some Democrats nationally who feared it would siphon time and money away from defeating Trump and winning control of the Senate. It also was not cheap, with both Kennedy and Markey raising and spending millions.

Markey now faces a general election contest where he is considered a strong favourite against the Republican primary winner, Kevin O’Connor, in November.