Japan’s governing party members have elected Yoshihide Suga as its new leader, making him all but certain to become the country’s next prime minister.

Given the Liberal Democratic Party’s (LDP) legislative majority, the current chief cabinet secretary is expected to handily win a parliamentary vote on Wednesday and succeed Shinzo Abe, who is stepping down as prime minister for health reasons.

In an address to his party after his election win on Monday, Suga repeated his pledge to continue Abe’s policies when he becomes Japan’s 63rd prime minister.

“We can’t afford to have a political vacuum,” the 71-year-old said, citing the need to tackle the coronavirus pandemic.

“In order to overcome the crisis and give the Japanese people a sense of relief, we need to succeed in what Prime Minister Abe has been implementing,” added Suga. “This is my mission.”

Suga is widely expected to stay the policy course set out by his predecessor, maintaining Abe’s economic strategy – a range of pro-growth stimulus policies known as “Abenomics”.

“Suga will carry on the vision Abe is handing over to him,” said Takashi Ryuzaki, a political analyst and former journalist, told Reuters news agency. “So there is no need for Suga to have his own vision.”

For the past eight years, Suga has been the public face of the Abe administration as the government’s top spokesman but kept a relatively low profile.

He became better known to the public last year when he was the one to unveil the name of the new imperial era, Reiwa, a celebratory moment that marked the ascension of the new emperor and went viral, earning him the nickname “Uncle Reiwa”.

Behind the scenes, associates and analysts say Suga has been instrumental in shifting elements of decision-making from Japan’s sprawling bureaucracy to the prime minister office and taming factional rivalries within the LDP.

In contrast to Abe, the scion of a political dynasty in Japan who staked his career on constitutional reform, Suga began his political career an outsider and steadily rose through the ranks in local politics.

“I was born as the oldest son of a farmer in Akita [prefecture],” Suga told party members.

“Without any knowledge or blood ties, I launched into the world of politics, starting from zero – and have been able to become leader of the LDP, with all its traditions and history.”

When he announced his bid last week, Suga also spoke about growing up in a farming community.

“He was very quiet,” said Hiroshi Kawai, a former high school classmate who still lives in Suga’s hometown of Yuzawa and works as a local tour guide. “He was someone you wouldn’t notice if he was there or not.”

Suga left town soon after finishing high school and worked in a cardboard factory in Tokyo to save money for university.

After graduation, he worked as a secretary for a prominent national lawmaker from Yokohama, home to Japan’s busiest port.

During his time in local politics, Suga pushed an ambitious project to redevelop Yokohama’s waterfront, according to Isao Mori, an author who published Suga’s biography in 2016.

In the eight years he spent in the city assembly, Suga rose to be known as Yokohama’s “shadow mayor”, Mori said.

Known for his relentless work ethic, Suga has said he begins most days at 5am, checking the news before doing 100 sit-ups and taking a 40-minute walk.

Daisuke Yusa first met Suga in 2004 when he was working as a salesman for a garbage company. Suga soon recruited him to work as his secretary.

“He used to say, think of yourself as an actor on a stage and think objectively about what position you’re in now,” Yusa said when asked about perceptions that Suga is more of a lieutenant than a leader.

‘He doesn’t try to stand out’

Yusa, now a local politician, said Suga always emphasised the importance of doing one’s best no matter what the job.

“I think he’s been able to remain in such a position without school ties or political faction because he doesn’t try to stand out,” he said.

Under Abe’s first administration in 2006, Suga headed the internal affairs ministry, where he introduced a hometown tax programme, offering tax deductions for those who donate money to local municipalities.

Matsushige Ono, who served as a vice minister under Suga, said the programme met fierce resistance from some bureaucrats, who opposed introducing a tax scheme without precedent.

“He continued to make his case because he saw how this would help rural communities,” Ono said.

When Abe regained the premiership at the end of 2012, he again tapped Suga.

In 2016, facing an ever-stronger yen, Suga created a framework for joint Bank of Japan, finance ministry and banking regulator meetings to signal Tokyo’s alarm to investors.

Officials had wanted to create such a framework for years, but friction between ministries prevented it from being implemented.

Mitsumaru Kumagai, chief economist at the Daiwa Institute of Research who is in frequent contact with Suga, said the new LDP leader has been particularly adept at navigating Japan’s complex bureaucracy.

“He is aware of who and where the key person is in any ministry and he understands how to move organisations by instructing that person,” Kumagai said.

This year, support for the administration went into freefall as the coronavirus pandemic battered an already slowing economy.

When Abe’s health began to visibly falter, speculation grew over Suga’s ambitions. And when Abe announced his resignation, Suga stood ready to fill his shoes. 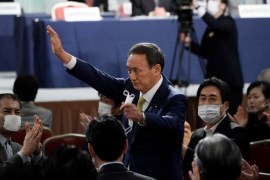 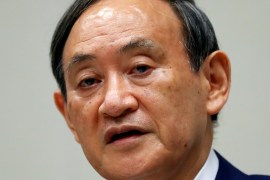