Twenty-six years after Bahrain welcomed an Israeli delegation for the first time, the small Gulf archipelago last week became the latest Arab country to agree to normalise its relationship with Israel.

It did not come as a surprise. Ever since US President Donald Trump announced on August 13 that the United Arab Emirates and Israel had agreed to establish diplomatic ties, there had been rife speculation that Bahrain would be next.

Despite Bahrain declaring last month that it was committed to the creation of a Palestinian state, the island state was always likely to follow the UAE suit “once the taboo had been broken”, Ian Black, visiting senior fellow at the Middle East Centre at the London School of Economics, told Al Jazeera.

Home to the US Navy’s regional headquarters and connected to Saudi Arabia by a 25km (16 miles) causeway, Bahrain in recent years seemed less reluctant to publicise its relations with Israel.

In February 2017, King Hamad bin Isa Al Khalifa met Jewish leaders in the United States and reportedly expressed opposition to the boycott of Israel by Arab countries. Later that year, the government-backed This is Bahrain interfaith group sparked outrage among Palestinians when it visited Israel only days after Trump had announced his controversial decision to recognise Jerusalem as Israel’s capital and move the US embassy there.

Friday’s deal with Israel was slammed by the Palestinians as another betrayal by an Arab state, further undermining their efforts to achieve self-determination and leaving them isolated under a new framework to regional “peace” dictated by Trump’s administration that also views Iran as malice.

“There is no doubt that this represents a grave blow to the Palestinians – and a bleak sense that their cause is no longer a priority for Arab regimes,” Black said.

The Palestinian leadership wants an independent state based on the de facto borders before the 1967 war, in which Israel occupied the West Bank and the Gaza Strip and annexed East Jerusalem. Arab countries have long called for Israel’s withdrawal from already illegally occupied land, a just solution for Palestinian refugees and a settlement that leads to the establishment of a viable, independent Palestinian state in exchange for establishing ties with it.

Even though regional heavyweight and Iran’s archenemy Saudi Arabia has so far signalled it is not ready to take the same step itself, analysts say the recent deals would not have happened without its support.

Bahrain’s political agenda is “pretty much dictated by Saudi Arabia”, according to Marwa Fatafta, a policy member with the Palestinian policy network Al-Shabaka.

In late 2018, just months before Manama agreed to host a US-led conference to unveil the economic part of Trump’s so-called Middle East plan, Saudi Arabia, the UAE and Kuwait pledged $10bn in financial support for Bahrain to steady its finances.

Besides being “financially dependent on its neighbours”, Bahrain’s new alliance with Israel may help it entrench its power and “crush any resistance to authoritarianism or efforts towards freedom and democracy”, Fatafta said.

In 2011, during the onset of the Arab Spring uprisings, Saudi Arabia sent troops to Bahrain to suppress anti-government protests. Many of those who rallied against the Bahraini monarch were from the country’s majority Shia population who have long complained of repression.

So, joining the bandwagon led by the US may also provide the Bahraini monarchy “continued protection against its own people”, said Mouin Rabbani, co-editor of the Jadaliyya publication.

In normalising ties with Israel, Bahrain is ensuring it has gained an ally that is “equally committed to maintaining the status quo and preventing the success of any popular uprisings”, he said.

Bahrain is the Gulf monarchy “most at odds with its own people”, argued Rabbani.

Strengthening the status quo also means singling out other main players in the region, such as Shia clerical state Iran, and even Turkey, according to analysts.

“The US and Israel have launched a comprehensive campaign to remove the question of Palestine from not only the international but also regional agenda, and to replace the Arab-Israeli conflict with an Arab-Iranian conflict,” Rabbani said.

At a time of regional upheaval, these Gulf states are driven by a desire to “solidify their relations with Washington”, he added.

Black said Bahrain cares more about “pleasing Washington”, but also noted that mutual hostility towards Iran is a key part of the emerging alliances.

Fatafta also believes that the teaming up comes with “common geopolitical interests”.

“They found in Israel a strong ally against their number one enemy: Iran,” she said.

For some of these states, the Iranian “threat” has grown in recent years, perhaps too quickly in neighbouring Yemen, as well as in Syria and Lebanon – which border Israel.

In Yemen, Saudi Arabia remains deadlocked in a war waging since March 2015 against the Iranian-aligned Houthi rebels, while in Syria, the proxies of the Shia Lebanese group Hezbollah fight in support of Syrian President Bashar al-Assad’s government – a staunch ally of Iran.

Saudi Arabia, which said earlier this month it would allow all flights between the UAE and Israel to cross its airspace, continues to be the key in determining which countries could follow in the footsteps of Bahrain and the UAE.

“One needs to distinguish between different Gulf states,” Black said. “Qatar and Kuwait are unlikely to follow the Emirati example. The key is Saudi Arabia which has reiterated its commitment to the Arab Peace Initiative” he added, referring to the 2002 plan that laid out Arab countries’ conditions for normalising ties with Israel.

“But that position may change in the future,” Black said.

A signing ceremony for the deals between Israel and Bahrain and the UAE, which will normalise diplomatic, commercial, security and other relations, is expected to be held in Washington, DC on Tuesday.

“Opening direct dialogue and ties between these two dynamic societies and advanced economies will continue the positive transformation of the Middle East and increase stability, security, and prosperity in the region,” a joint statement by the US, Bahrain and Israel said last week.

While Oslo did little to help Palestinians, Israel has moved to further entrench its control over the occupied Palestinian territories, with Washington’s backing. Earlier this year, Trump’s so-called Middle East plan greenlighted the Israeli annexation of large swaths of the occupied West Bank including illegal settlements and the Jordan Valley, giving Israel a permanent eastern border along the Jordan River.

“If a viable two-state solution is no longer on the regional and international agenda, then there is no other workable solution for ending the occupation,” Black said.

Fatafta concurred that the diplomacy track taken since Oslo by Palestinian leaders has failed and said Palestinians must “reclaim the PLO” if they wish to achieve self-determination.

Rabbani also said no change will come about unless there is a “comprehensive restructuring and rebuilding of the national movement on the basis of a thorough disengagement from the structures and relationships developed on the basis of the Oslo agreements”.

“It’s a tall order, not impossible, but will never happen until the current leadership passes or is forced from the scene.” 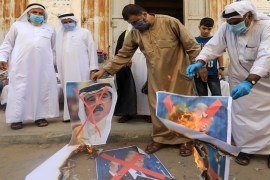 ‘Arab consensus’ long held Arab states will normalise ties only if Israel meets a number of conditions for Palestinians. 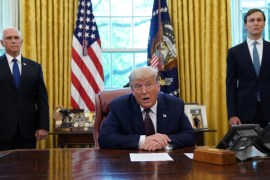 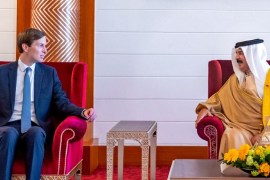