Wildfires raged unchecked across large parts of the western United States on Wednesday in blazes unprecedented in their scale and ferocity, as Oregon warned of many deaths after blazes destroyed at least five small towns.

Winds gusting as high as 80km/h (50mph) fanned dozens of catastrophic fires across a large swathe of Oregon and neighbouring Washington state – places that rarely experience such intense fire activity because of the Pacific Northwest’s cool and wet climate.

The blazes, which also forced the evacuation of much of Medford in southern Oregon, could bring “the greatest loss in human lives and property due to wildfire in our state’s history”, Brown said at a news briefing.

In Washington state, a one year old boy was killed and his parents badly burned as tried to flee a fire, police said.

Nearly 100 fires are raging across the west of the US, with 28 in California, where nearly 930,800 hectares (2.3 million acres) have been burned and three people were on Wednesday confirmed dead. A massive cloud of smoke has enveloped much of the state leaving San Francisco beneath an eerie orange glow.

A 12-year-old boy and his grandmother died in a wildfire about 50 miles south of Portland, KOIN News reported. In Washington state a 1-year-old boy was killed and his parents severely burned as they tried to flee a fire in Okanogan County, police said.

Firefighters retreated from uncontrollable blazes in Oregon as officials gave residents “go now” orders to evacuate, meaning they had only minutes to leave their homes.

“It was like driving through hell,” Jody Evans told local television station NewsChannel21 after a midnight evacuation from Detroit, southwest of Portland.

Officials in the Pacific Northwest said they did not recall ever having to deal with so many destructive fires at once in the areas where they were burning.

In suburban Clackamas County, home to about 420,000 people who mostly work in nearby Oregon, four major fires were burning, with sheriff’s deputies travelling with chainsaws in patrol cars to remove fallen trees blocking roads.

“These winds are so incredible and are spreading so fast, we don’t have a lot of time,” said Clackamas County Sheriff Craig Roberts.

Fires were burning in seven Oregon counties, and rural and suburban homes miles away from Portland, Oregon’s largest city, were under preliminary orders to prepare for possible evacuations. Three prisons were evacuated late on Tuesday.

Brown saw no respite to the hot, windy weather and requested a federal emergency declaration for the state.

“Absolutely no area in the state is free from fire,” said Doug Graf, chief of fire protection for the Oregon Department of Forestry.

The Pacific Northwest is no stranger to wildfires, but most of the biggest ones until now have been in the eastern or southern parts of the region – where the weather is considerably hotter and drier and the vegetation more fire-prone than it is on the western side of the region.

85+ large wildfires are raging across California, Oregon and Washington.

Fires in 2017 and 2018 reached the top of the Cascade Mountains – the long spine that divides dry eastern Oregon from the lush western part of the state – but had never before spread into the valleys below, said Doug Grafe, chief of Fire Protection at the Oregon Department of Forestry.

Climate scientists blame global warming for extreme wet and dry seasons in the US West that have caused grasses and scrub to flourish then dry out, leaving abundant fuel for fires.

“We do not have a context for this amount of fire on the landscape,” he said. “Seeing them run down the canyons the way they have – carrying tens of miles in one period of an afternoon and not slowing down in the evening – [there is] absolutely no context for that in this environment.”

Further north in Washington state, Governor Jay Inslee said more than 133,546 hectares (330,000 acres) had burned in a 24-hour period – an area larger than the acreage that normally burns during entire fire seasons that stretch from spring into the autumn.

About 80 percent of the small eastern Washington farming town of Malden was levelled by flames from a fast-moving fire on Monday. Among the buildings that burned were the town’s fire station, post office, city hall and library.

In California, more than 14,000 firefighters continue to battle fires and all 18 National Forests have been closed due to “unprecedented and historic fire conditions.”

To the south, the Creek Fire, about 35 miles (56 km) north of Fresno, tore through the Sierra National Forest, destroying more than 360 homes and structures.

“This fire is just burning at an explosive rate,” said Daniel Berlant, a spokesman for California‘s state fire authority. “You add the winds, the dry conditions, the hot temperatures, it’s the perfect recipe.”

Helicopters have been used in recent days to rescue hundreds of people stranded in the burning Sierra National Forest, where a fire has destroyed 365 buildings, including at least 45 homes. About 5,000 buildings were threatened, fire officials said.

In Southern California, fires burned in Los Angeles, San Bernardino and San Diego counties. People in foothill communities east of Los Angeles were warned to be ready to flee, but the region’s notorious Santa Ana winds were weaker than predicted. 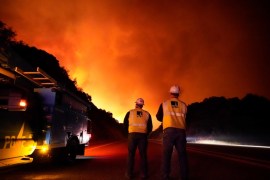 California fires rage as winds continue and power is shut off

Fire risk is high across California, with two of the three largest fires burning in the San Francisco Bay area. 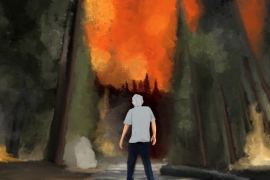 Ancient redwood trees have adapted to survive forest fires, but how will they hold up to climate change? 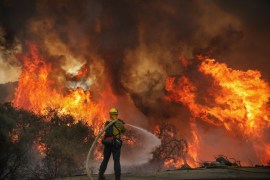