New York Attorney General Letitia James has filed a bombshell lawsuit in a state court seeking to dissolve the National Rifle Association and alleging millions in donor funds were diverted under the leadership of NRA president Wayne LaPierre.

The NRA “operated as a breeding ground for greed, abuse and brazen illegality”, James said in a news conference. “For these years of fraud and misconduct we are seeking an order to dissolve the NRA in its entirety.”

New York’s lawsuit, filed in state court in Manhattan, is a civil complaint, but James said the investigation was continuing and she expected criminal referrals would be made if warranted by evidence.

The NRA is the largest organisation of gun owners and for decades has been a powerful supporter of Republican politicians and an effective opponent in the US Congress of Democrat-backed gun control proposals.

The association responded in a series of tweets calling the suit “a transparent attempt to score political points and attack the leading voice in opposition to the leftist agenda”.

This was a baseless, premeditated attack on our organization and the Second Amendment freedoms it fights to defend. You could have set your watch by it: the investigation was going to reach its crescendo as…

With headquarters in the Virginia suburbs of Washington, DC, the NRA is a non-profit organisation incorporated in New York state. Attorney General James began investigating the NRA more than a year ago when accusations surfaced about the misuse of donor funds by NRA president LaPierre.

The lawsuit, filed in state court in Manhattan after an 18-month investigation, highlighted misspending and self-dealing allegations that have roiled the NRA and its longtime leader LaPierre, in recent years – from hair and makeup for his wife to a $17m post-employment contract for himself.

Simultaneously, the Washington, DC, attorney general sued the NRA Foundation, a charitable arm of the organisation designed to provide programmes for firearm safety, marksmanship and hunting safety, accusing it of diverting funds to the NRA to help pay for lavish spending by its top executives.

The troubles, which James said were long cloaked by loyal lieutenants and a pass-through payment arrangement with a vendor, started to come to light as the NRA’s deficit piled up and it struggled to find its footing after a spate of mass shootings in the US eroded support for its pro-gun agenda. The organisation went from a nearly $28m surplus in 2015 to a $36m deficit in 2018.

On hearing of the lawsuit President Donald Trump said on Thursday, “It’s a very terrible thing that just happened. I think the NRA should move to Texas and lead a very good and beautiful life. This has been going on for a long time. They’ve been absolutely decimated by the cost of that lawsuit. And it’s very sad.”

James, a Democrat, argued that the organisation’s prominence and cosy political relationships had lulled it into a sense of invincibility and enabled a culture where nonprofit rules were routinely flouted and state and federal laws were violated.

Even the NRA’s bylaws and employee handbook were ignored, she said.

“The NRA’s influence has been so powerful that the organisation went unchecked for decades while top executives funnelled millions into their own pockets,” James said in a statement announcing the lawsuit.

“The NRA is fraught with fraud and abuse, which is why, today, we seek to dissolve the NRA, because no organisation is above the law.”

A spokesman for the NRA’s legal team had no immediate comment, according to the Reuters news agency.

James is taking aim at the NRA after her office last year dismantled President Donald Trump’s charitable foundation and fined him $2m to settle allegations he used donations meant for worthy causes to further his own business and political interests. 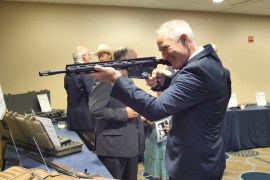 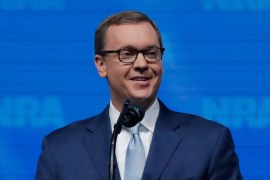 NRA’s top lobbyist resigns amid turmoil within the gun group

Chris Cox’s departure from NRA comes weeks after he was accused of participating in attempted coup against his boss.