Beirut, Lebanon – “I think I’ve just had enough,” says Naila Saba as she stands among the debris of her eviscerated Beirut business.

“I felt the blast, I saw the news, and I was unable to be any more moved. I am exhausted. I have no more tears,” said the 42 -year-old co-owner and chef at Aaliya’s Books, a fixture of the city’s historic Mar Mikhail neighbourhood.

Her thoughtfully arranged bar and bookstore was no more. The steel and glass-panel doors that made up its exterior had been ripped from their hinges in the massive explosion that tore through Beirut on Tuesday, killing at least 137 people, injuring 5,000 and displacing up to 300,000.

Shards of glass shot through the bar’s cosy interior like bullets, some embedding in the books that line its back wall. Tables and chairs lay upturned while shattered vases left pink and white flowers on the wooden floor, powdered in crystalline dust.

The large, red air conditioning vents were crushed or flayed open, hanging precariously from the ceiling. So strong was the blast that it peeled some of the navy blue tiles off the bar’s walls.

The damage to Aliya’s Books is mirrored across much of Beirut’s Mar Mikhail and Gemmayze neighbourhoods, once lively areas of the capital, centred on a long street that cuts from downtown to the city’s eastern edge.

The street is about 500 metres (550 yards) away from – and runs parallel to – Beirut port, the epicentre of Tuesday’s blast.

For nearly a year, bars, restaurants, art galleries and stores in this neighbourhood struggled to make ends meet due to Lebanon’s unprecedented economic crisis, which has seen its currency lose 80 percent of its value.

Then, a three-month lockdown aimed at preventing the spread of the novel coronavirus worsened their plight.

For many of them, the explosion that rolled through their Bohemian community – scarring the iconic colourful street stairs and pulverising century-old buildings – is almost certainly a deathblow.

“Its really tiring,” said Saba, who was also on the front lines of a massive anti-establishment uprising that rocked Lebanon last October, the biggest-ever expression of public anger at the country’s political class.

“I am a revolutionary. I was on the streets from October to January, then the lira [Lebanese pound] depreciation hit, our money got stuck at the bank, and we are left paying black market rates,” she said.

Saba had to let go eight of her 20 staff in the past few months, those who remain are working fewer hours than before.

“We were scrambling to get salaries for the next month, and then the store blew up, and I am so tired, I thought, ‘Excellent. F*** it.’ Let’s not open again. Why would we?”

In the aftermath of the destruction, little aid has been forthcoming from the bankrupt state.

‘We don’t want their help’

Rescue and clearance efforts in Mar Mikhail and Gemmayze were led by civil defence volunteers and an army of good neighbours wielding brooms, dustpans and shovels.

At Aliya’s Books, at least a dozen volunteers helped move the books to a storeroom, pile up the mangled white doors and clear the seemingly endless piles of glass.

Saba offered them shots of whiskey and, even though it was well before noon, they readily accepted.

Out on the street, many said they felt like they had been attacked by their own politicians, who knew that 2,750 tonnes of highly explosive ammonium nitrate was stored at Beirut’s port for over six years, but did nothing until it exploded.

“They have declared war on us, this corrupt state, and it’s up to us to clear up the mess. We know they’re not going to help. We don’t want their help,” Roy Rached, a 30-year-old unemployed man wearing a high-visibility vest and thick gloves, told Al Jazeera.

So high is the animosity between the people and the state that successive groups of civilian cleaners cheered as they walked past the destroyed skeleton of a building housing state-run power company, Electricite du Liban.

Protesters had gathered outside the structure for months to denounce chronic power cuts and more than $40bn in losses the company has accrued over the past three decades, saddling the nation with debt.

“May God prevent your recovery,” a woman draped in a Lebanese flag shouted at the building’s ashen facade, a symbol of corruption now in tatters.

For the inhabitants of a ruined city, the initial devastation from the blast has quickly turned to rage.

The fact that the state officials – known for their eye-watering corruption and lax approach towards the public’s interest – were aware about the dangers but didn’t do anything makes perfect sense in retrospect.

But it’s an offence even the Lebanese people, jaded by years of explosions and injustice, can’t let slip.

“I am horrified this could have been sheer negligence and corruption versus a straight-up, honest terrorist attack, which I could understand,” a furious Saba said.

“We can understand the fundamentalists. But this idea that for six years we could be blown up at any moment, and no one did anything about it? No whistleblower? That’s shocking.” 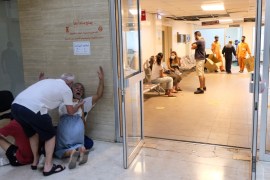 Ministers, port officials and judges trade blame as Lebanon begins probe into cause of deadly explosion. 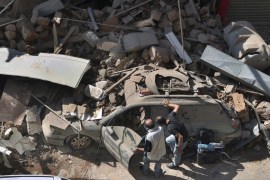 How will Lebanon deal with the devastating Beirut explosion?

The country is reeling from an unprecedented explosion at the port of its capital.