Gaza City – Fears are mounting for the safety of people with health issues as already-strained hospitals are largely without power and the Palestinian territory faces a coronavirus outbreak.

Two million residents are surviving on only four hours of electricity a day after Israel cut off the fuel supply, leading to the shut down of Gaza’s sole power plant last week.

Israel made the move after the continuous launch of incendiary balloons from the coastal enclave towards Israeli communities surrounding the Gaza Strip by activists demanding the easing of the crippling 13-year blockade.

At 5:30am local time, Salwa al-Bitar, 40, arrived at al-Shifa hospital to start her four-hour dialysis treatment in central Gaza City, which she requires once a week, before the arrival of other patients for the life-saving treatment.

“The situation is harder than before in addition to the precautionary measures to avoid COVID-19 infections. We are afraid from the effects of the fuel shortage on hospitals,” al-Bitar told Al Jazeera.

“My body is very sensitive. With only four hours of electricity, it’s like experiencing death in life. I can’t breathe as I can’t operate a fan, air conditioning, or use any substitution to deal with the electricity shortage.”

“In addition, the electricity crisis endangers the daily surgeries, caesarean deliveries, and the laboratories … as the old generators can barely cover the electricity needs during this crisis,” al-Qidra told Al Jazeera.

On Monday night, a total lockdown was imposed on the besieged Gaza Strip after authorities confirmed the first coronavirus infections.

“The announcement of COVID-19 cases within the community in Gaza puts the dilapidated health system due to the blockade at a dangerous new juncture, and it is difficult to withstand without regional and international support,” said al-Qidra.

Mohamed al-Qawwas, 55, needs to visit the dialysis unit three times a week, and he expressed concern at the arrival of COVID-19 in Gaza. He has diabetes and heart disease, which make a potential infection extremely dangerous.

“I go to the hospital three times a week and due to fuel and equipment shortage, I wait for about two hours to start my four-hour session,” al-Qawwas told Al Jazeera. “This is exhausting my heart and spirit.”

On August 11, Israel halted the entry of some materials into Gaza, but days later banned all transfers through the only commercial crossing except for food and medicine. The sea was also made inaccessible to fishermen on August 16.

Fawzi Barhoum – a spokesman for Hamas, the rulers of Gaza – called Israel’s move “a crime against humanity”.

“If the occupation thinks that this siege will undermine the determination and persistence of our people and its resistance, and that it will achieve security for them, that is delusional,” Barhoum said in a statement.

“The absence of deterrent decisions to the occupation, but rather ignoring its crimes and normalisation with it is the main reason for its persistence in its crimes and violations against Palestinians.”

The Palestinian Businessmen Association in Gaza announced on Monday that nearly 2,000 companies have been completely or partially affected by the power station’s stoppage.

“Preventing the entry of various materials necessary for the activity of the industrial and health sectors threatens to have dangerous repercussions on the strategic stock of basic needs, threatening food insecurity, high unemployment, and poverty rates,” Ali al-Hayek, head of the association, told Al Jazeera.

“The food industry in Gaza has been affected negatively by the lack of fuel as there is a decrease in production. And because of the coronavirus crisis, consumers rushed to stockpile food for the home quarantine period, which forced us to work longer hours using fuel generators that increase the cost of production for us,” he said.

Ahmed Labib al-Helou, head of the Association of Owners of Oil and Gas Companies in Gaza, warned of “disastrous consequences” on fuel supplies if the closure of the Karem Abu Salem (known as Kerem Shalom to Israelis)commercial crossing with the Israeli side continues.

Fishermen, too, are voicing concern.

“We depend on daily wages from selling the fish catch. If we don’t work we can’t afford food for our families, and for the 13th day in a row there is no source of income because of the ban on fishing,” said Khaled al-Habil, 40, a fisherman from the al-Shati refugee camp in Gaza City.

“In addition to the implications of COVID-19 and precautionary measures that decreased our fish supply during the past three months, now Israel has shut down the sea. Two enemies against us – that is too much.”

Palestinian politician Jamal al-Khudari, chairman of the National Committee to Confront the Siege against Gaza, said the reopening of the commercial crossing was imperative with Gaza now facing the COVID-19 pandemic.

“The coronavirus pandemic enters Gaza in the most difficult humanitarian, health and environmental conditions, in light of the tightening of the occupation’s siege,” he said in a statement.

Palestinian sources confirmed the Qatari envoy to Gaza, Mohammed al-Emadi, was in the enclave on Wednesday as part of mediation efforts to alleviate tension between Israel and Hamas and fears of another all-out war. 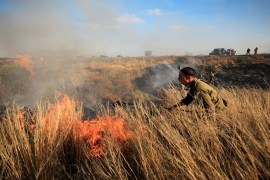 Hamas: Gaza will not ‘remain silent’ as Israel escalates siege

Fire balloons and air raids ratchet up tension as Hamas pushes for the complete removal of Israel’s devastating siege. 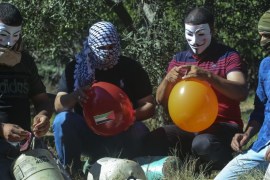 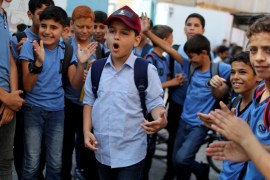 Gaza’s MCA rapper: An 11-year-old’s message to the world

Abdulrahman al-Shantti, aka MCA, wants to tell the world about life in Gaza, through his music.