Former Vice President and Democratic nominee Joe Biden was cast as a decent, dependable friend of the working class who will handle the coronavirus with his experience and decency.

“If you trust me with the presidency”, Biden began, “I will be an ally of the light, not the dark”.

Biden called the situation in the US a “perfect storm: the worst pandemic in over 100 years” and “the worst economic crisis since the Great Depression”. He said the country was experiencing “the biggest call for racial justice since the 60s”, referencing the major crisis of the US, saying it’s a “time of real peril, but extraordinary possibilities”.

Biden cited the over five million and 170,000 dead as a result of the coronavirus pandemic, along with its serious economic toll, promising to get the virus “under control” as his first step as president. He vowed to deploy quick testing and protective equipment needed to handle the virus.

Biden spoke fondly of former President Barack Obama, under whom he served as vice president, and his landmark “Obamacare” law, which Republicans have vowed to repeal, promising to expand healthcare access.

Speaking about the economy, Biden said that if Trump wins, “working families will struggle to get by … and yet the wealthiest one percent” will continue to gain billions – echoing common rhetoric from progressive leader Senator Bernie Sanders and coming alongside a promise to change a tax code that “rewards wealth more than it rewards work”.

Biden promised to create five million clean energy jobs, and expand train lines while making universities more affordable. Women will receive equal pay for equal work, he said, and early childhood care will be available to all. Social Security and Medicare, popular sections of the US welfare system aimed at the elderly, will be protected.

Biden also referenced George Floyd’s death, saying the US might be ready to end the “scourge” of racism.

A group of former Democratic presidential hopefuls sat in a virtual roundtable to discuss their memories of Biden as a leader.

Buttigieg opened the segment with a standalone speech, saying “over 10 years ago, I joined a military where firing me because of who I am wasn’t just possible – it was policy”, referring to the former policy of “Don’t Ask, Don’t Tell”, the US military’s stance on not allowing openly LGBT members.

“Now in 2020, it is unlawful in America to fire anyone because of who they are or who they love. The very ring on my finger reflects how this country can change.”

Then, Senators Elizabeth Warren, Amy Klobuchar, Bernie Sanders, and Cory Booker were joined by former Texas Representative Beto O’Rourke and Buttigieg spoke about Biden’s decency while calling on their supporters to join forces to defeat Trump at the ballot box.

Sanders said Biden “is decent”, which the US needs especially now. “Whether you’re progressives … moderates … or conservatives, we must come together,” he urged.

Booker concluded the segment by telling the others, “It was an honour to run against you. It is a greater honour to stand with you,” referencing their group effort to get Biden elected.

Senator Booker, a former presidential candidate, recalled his grandfather’s history in moving from the segregated US South to Detroit, where he made a living by working blue-collar jobs.

The working class is pivotal for Biden, Harris and the Democratic party, Booker said, and they will be appreciated if Biden is elected.

“We’ll stand for those who cook, and serve, and clean; who plant and harvest; who pack and always deliver, whose hands are thick with calluses, like my grandad’s who held mine when I was a boy,” Booker said.

“If he was alive, Joe and Kamala, he would be so proud of you – and he’d tell us, take another by the hand, and another, and let’s get to work, this dream ain’t free, you gotta work for it.”

The DNC invited Atlanta Mayor Keisha Lance Bottoms to speak on the importance of electing candidates who “believe the lives of [her] four Black children matter”: Biden and Harris.

Bottoms spoke about the inspiration the late Representative John Lewis, who died on July 17, and his struggles in the civil rights movement.

The “baton” was “passed to the current generation”, Bottoms continued, as seen in the mass movement that arose after the death of George Floyd in Minneapolis police custody in May.

“We have cried out for justice, we have gathered in our streets to demand change, and now, we must pass on the gift John Lewis sacrificed to give us, we must register and we must vote”, Bottoms said before a video tribute to Lewis played, followed by a performance by John Legend and Common.

Governor Gavin Newsom of California appeared in a video shot on a mobile phone a few miles from raging wildfires, he said in his address.

California is currently experiencing a “megafire” bigger than Manhattan, and Trump doesn’t believe its real, Newsom said, even as temperatures reach up to 54 degrees Celsius in California.

Biden has fought to protect the environment, and voters must do “everything” they can to get Biden and Harris elected, Newsom continued.

“There is so much at stake in this election”, the governor said, and stressing the need to vote, he concluded, “the future isn’t something to experience, it’s something to manifest.”

The virtual Democratic National Convention attracted its biggest TV audience to date on Wednesday when former President Barack Obama and vice-presidential nominee Senator Kamala Harris made their appeals to voters, according to data from tracking firm Nielsen.

The TV audience for the convention, where Democrats nominated Joe Biden for president, remained below the level of 2016. TV viewership was about seven percent higher on night three of the convention four years ago.

But the TV figures do not include viewing on digital platforms, which has jumped significantly since 2016 as traditional television watching has declined.

“I have gotten to know both Joe and Kamala on the trail over the past year,” Yang is expected to say. “They understand the problems we face. They are parents and patriots who want the best for our country. And if we give them the chance, they will fight for us and our families every single day.”

Buttigieg, whom Biden has compared to his late son, Beau, will say “Americans “must now decide. Can America be a place where faith is about healing and not exclusion?”

Buttigieg, who faced controversy surrounding his handling of policing in South Bend, will ask: “Can we become a country that lives up to the truth that Black lives matter? Will we handle questions of science and medicine by turning to scientists and doctors? What will we do to make America into a land where no one who works full time can live in poverty?”

23:42 GMT – AOC calls out Democrats for challenging progressives in primaries

New York Representative Alexandria Ocasio-Cortez, a figurehead of the burgeoning progressive movement within the Democratic Party, tweeted a challenge to Democrats after House Speaker Nancy Pelosi announced she would endorse a moderate challenger to the progressive Massachusetts Senator Ed Markey.

Progressive challengers have made gains in the wake of Senator Bernie Sanders’s two presidential campaigns in 2016 and 2020. Often, they have done so by challenging unpopular, moderate Democrats in safe seats.

These challenges have gone without support from the Democratic Congressional Campaign Committee (DCCC), which works to elect Democrats to Congress and usually blacklists its associates from working to unseat Democrats in good standing.

“So”, Ocasio-Cortez tweeted to the DCCC, “when can we expect you to reverse your blacklist policy against primary orgs?”

No one gets to complain about primary challenges again. 🤗

So @dccc, when can we expect you to reverse your blacklist policy against primary orgs?

Because between this & lack of care around @IlhanMN’s challenger, it seems like less a policy and more a cherry-picking activity. https://t.co/xSneSK8H2q

The challenge comes amid talks of a feud between the progressive wing – which observers say has been noticeably absent from the DNC – and the moderate wing, headed by Biden.

House Speaker Nancy Pelosi and former Attorney General Eric Holder delivered a stark reminder to Wisconsin Democrats on Thursday about the importance the Midwestern battleground state plays in the presidential election less than 11 weeks away.

Wisconsin did not get the national attention it hoped for when the Democratic convention – originally planned for the state’s biggest city, Milwaukee – was moved online due to concerns about the spread of the coronavirus.

The Democrats’ previous nominee, former Secretary of State Hillary Clinton, did not visit the state during the 2016 campaign, though Trump visited several times. Trump’s victory by razor-thin margins there helped in the US Electoral College, which guaranteed him the presidency in spite of losing the popular vote.

After Trump’s narrow victory of fewer than 23,000 votes in the state in 2016 – and with polls showing another close race this year – Democrats are pledging not to downplay the importance of Wisconsin in Biden’s efforts to defeat Trump.

Former White House adviser Steve Bannon, an architect of Trump’s 2016 election victory, was arrested on a yacht and pleaded not guilty on Thursday after being charged with defrauding donors in a scheme to help build the president’s signature wall along the US-Mexico border.

The indictment claims the “scheme” was related to an online crowdfunding campaign that claims to have raised more than $25m to build a wall along the southern border of the US, a signature policy proposal from Trump.

As a top adviser to Trump’s 2016 presidential campaign who later served as White House chief strategist, Bannon helped articulate the right-wing populism and fierce opposition to immigration that have helped define Trump’s three and a half years in office.

21:45 GMT – Unemployment ticks up as coronavirus continues in the US

The number of workers in the US who are filing for state unemployment benefits climbed back above one million last week, signalling that businesses continue to lay off workers as the economy struggles to climb out of the deep recessionary hole caused by the coronavirus pandemic.

Some 1.1 million Americans filed initial jobless claims with states in the week ending August 15, the Bureau of Labor Statistics reported on Thursday. That is 135,000 more than the previous week, when the number fell below one million for the first time since March.

For the millions of Americans collecting unemployment, times are only getting tougher. The $600 federal weekly top-up to state benefits expired last month. Trump issued an executive order for a replacement $300-a-week federal top-up bankrolled by the government’s disaster relief fund, but only half of states so far have said that they will be applying for that additional aid.

The state of the economy was always a strength for Trump, but it is turning into a liability. Read more here. 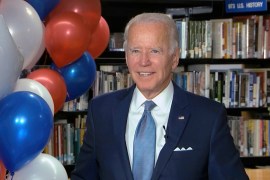 Democratic National Convention: Who is speaking on final night?

Joe Biden is the headliner in a lineup that includes Mike Bloomberg, Pete Buttigieg, Cory Booker and Tammy Duckworth. 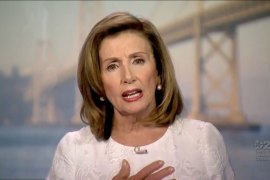 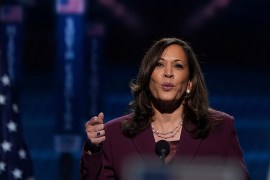