A presidential primary season like no other will culminate this week for the Democratic Party in the United States in an unprecedented, mostly digital convention that is set to cement Joe Biden as the official candidate tasked with taking on President Donald Trump in a November election.

Only essential staff will be on the ground at the convention centre in Milwaukee, Wisconsin, a pivotal swing state that had spent millions of dollars preparing to host the high-profile event, which runs from August 17 to 20, before it was scaled back in light of the pandemic.

This year, the fanfare and spontaneity of past conventions – in which about 4,800 delegates officially nominate the Democratic candidate and the party lays out its policy priorities – will be replaced by a series of speeches streamed from across the country, which leads the world in terms of confirmed coronavirus cases and related deaths.

The speeches, about half of which will be pre-recorded, will run for two hours each night. They will include former Democratic presidents and several high-profile senators who just months ago challenged Biden to be the party’s candidate, as well as some of the party’s most respected former officials and rising stars.

The lineup also includes a former Republican governor and presidential candidate who has become a fierce critic of Trump, and organisers have hinted that at least one other prominent Republican may make an appearance.

Musical guests featured during the event will include John Legend, Common, Billie Eilish and the Chicks – formerly the Dixie Chicks. The Biden campaign on Friday also announced there will be online watch parties in all 50 states featuring elected officials and celebrities such as actress Alyssa Milano, former Democratic presidential candidate Pete Buttigieg and former Democratic adviser Valerie Jarrett.

The four-day convention is sure to pose some logistical problems for the party, the most notable expected to be the challenge for speakers to deliver rousing speeches from empty rooms devoid of cheering supporters.

While party caucus and council meetings will be held digitally, observers have also noted the cyber gatherings will likely lack much of the strategising, deal-making and networking between different interest groups that have defined past conventions.

“Nothing about 2020 has been normal. So I don’t think anyone expected that this convention would be normal either,” Atlanta Mayor Keisha Lance Bottoms, who was under consideration to serve as Biden’s running-mate and will speak at the convention on Thursday, told The Associated Press news agency.

“I hope wherever people are that they’re excited about the moment and the opportunity that lies before us.”

The convention comes as Democratic officials work to energise voters behind Biden’s candidacy – and not simply against Trump.

While defeating the Republican president is a huge motivator for many within the party, there is some concern that less-engaged voters who lean Democrat and swing voters are not locked in to cast ballots for Biden, especially as the pandemic is expected to create barriers to voting.

Following a fractious and ideologically diverse 28-candidate primary season, the party has also sought to unify before the convention and avoid a repeat of 2016 when Hillary Clinton’s supporters clashed with those backing her progressive rival, Bernie Sanders.

The more moderate Biden, a former vice president, has already enlisted the progressive wing to help formulate the party platform and has been carefully calibrating policies – notably on healthcare and climate – more to the left.

Democratic National Convention programme executive Stephanie Cutter has said speakers across the party’s political spectrum will highlight “Trump’s failed leadership and the promise of what we can and should be with Joe Biden as president”.

Those speakers are organised around themes for each of the four nights.

On Monday, the “We the People” lineup will feature speakers who the party says have risen up to face three defining challenges in modern US life: the coronavirus pandemic, the resulting unemployment crisis and racial injustices.

Finally, on Thursday night’s “America’s Promise”, Biden will officially accept the party’s nomination during a speech streamed from an event centre in his hometown of Wilmington, Delaware.

The event will be a precursor to the Republican National Convention, which will also be a digital event set to begin on August 24.

On Monday, Trump is set to visit Wisconsin, where he plans to deliver a speech in Oshkosh, north of Milwaukee, addressing Biden’s “failures on jobs and the economy”, according to the president’s campaign.

Trump will not attend the Republican convention in person the following week. He will deliver his speech from a yet-to-be-announced location, although he has told the New York Post he will “probably” make the speech from the White House lawn.

Trump’s re-election campaign has also said it plans to spend millions of dollars on a digital advertising campaign during the Democratic convention.

Trump campaign spokesman Tim Murtaugh has said the advertisement purchases during the week could total more than $10m and the expenditure will be at least in the high-seven figures. 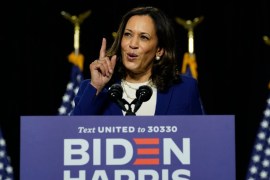 Magazine says it failed to anticipate how the op-ed about the US vice presidential candidate could be ‘weaponised’. 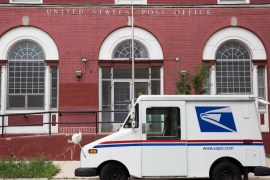 With millions of Americans expected to vote by mail, Donald Trump has opposed funding to support the US Postal Service.