Biden, a 77-year-old white man, embraced the significance of naming the first Black woman to a major party’s presidential ticket, but he also focused on other attributes Harris brings to the ticket.

Biden hailed the California senator, the 55-year-old former prosecutor who a year ago excoriated Biden on a primary debate stage, as the right woman to help him defeat Trump and then lead a nation facing crises in triplicate: a pandemic, wounded economy and long-simmering reckoning with racism.

Harris, Biden declared at a high school gymnasium in his hometown of Wilmington, Delaware, is “smart, she’s tough, she’s experienced, she’s a proven fighter for the backbone of this country.”

“Kamala knows how to govern. She knows how to make the hard calls. She’s ready to do this job on day one,” he said.

Taking the stage after Biden, Harris flicked at some of the gender critiques she had faced throughout the Democratic primary, saying she was “mindful of all the ambitious women before me, whose sacrifice, determination and resilience makes my presence here today even possible.”

She then launched into an attack on Trump, lambasting him for a lack of leadership on the coronavirus pandemic.

“This is a moment of real consequence for America. Everything we care about – our economy, our health, our children, the kind of country we live in – it’s all on the line,” she said.

The Biden campaign had said it hoped to create a first public appearance that blends the momentous nature of Harris’ selection with the realities of the 2020 campaign and the gravity of the nation’s circumstances.

After speaking, Biden and Harris hosted an online fundraiser designed to let small donors get a fresh glimpse of what the Democratic presidential ticket will look like in the lead-up to election day on November 3.

Here’s a timeline of their campaign events on Wednesday:

“The virus has impacted almost every country. But there’s a reason it has hit America worse than any other advanced nation,” Harris said.

“It’s because of Trump’s failure to take it seriously from the start. His refusal to get testing up and running. His flip-flopping on social distancing and wearing masks. His delusional belief that he knows better than the experts,” she said.

The US has recorded 5.1 million cases of infection and more than 165 thousand deaths from the virus.

Harris talked about how her upbringing and her parents, Jamaican and Indian immigrants, who met while protesting for civil rights in Oakland back in the 1960s.

“My mother and father, they came from opposite sides of the world to arrive in America. One from India and the other from Jamaica in search of a world-class education. But what brought them together was the civil rights movement of the 1960s,” she said.

“And that’s how they met as students in the streets of Oakland marching and shouting for this thing called justice in a struggle that continues today.”

Harris characterised 2020 as a “moment of real consequence for America.”

“Everything we care about, our economy, our health, our children, the kind of country we live in, it’s all on the line. We’re reeling from the worst public health crisis in a century. The President’s mismanagement of the pandemic has plunging us into the worst economic crisis since the great depression,” Harris said.

In a sharp criticism of President Donald Trump, “America is crying out for leadership,” she said. “Yet we have a president that cares about himself more than the people who elected him,” Harris said from the podium.

Speaking about Biden, she said: “He’s someone who never asks, ‘Why is this happening to me?’ and instead asks, ‘What can I do to make life better for you?’ This empathy, compassion, this sense of duty to care for others, is why I am so proud to be on this ticket,” she said.

California Senator Kamala Harris began speaking during her first campaign appearance as Biden’s pick for vice president. She spoke highly of Biden, mentioned the women who helped pave the way for her and acknowledged the work that remains to be done to curb the coronavirus pandemic.

“After the most competitive primary in history, the country received a resounding message that Joe was the person to lead us forward and, Joe, I’m so proud to stand with you. And I do so mindful of all the heroic and ambitious women before me whose sacrifice, determination and resilience makes my presence here today even possible,” Harris said.

Joe Biden sought to speak to the angst Americans are feeling as the COVID-19 pandemic crushes the US economy and leaves millions of Americans out of work.

“Million of Americans are living that struggle right now as we speak, especially in this moment of crisis, especially with so many jobs lost,” Biden said.

“It’ll be the work of our administration to make sure they get a fair shot. Working families need someone on their side in this nation because they certainly don’t have one in the president,” said.

Biden identified three main issues he said his administration would focus on upon taking office: recovering from the coronavirus pandemic, dealing with the climate crisis, and reckoning with racial injustice.

He said his administration would “use clear science based guidance” to turn the corner of the coronavirus, while scaling up testing and increasing funding local and state governments.

He said the country is facing a climate crisis that “Donald trump refuses to even acknowledge”.

Biden also noted that today is the third anniversary of the Unite the Right rally in Charlottesville, Virginia, after which Trump famously declared there are “very fine people on both sides”.

“The question is for all Americans – who are we as a nation, what do we stand for, and most importantly who do you want to be?” he said.

“Little girls woke up, especially little black and brown girls are so often feel overlooked and undervalued in their communities,” he added. “Today, today just maybe they’re seeing themselves for the first time in a new way.”

Joe Biden said of Kamala Harris ‘her story is America’s story’, referring to the senator’ upbringing as the daughter of two immigrants.

He described her as an intelligent fighter for the middle class who “knows how to make the hard calls. Ready to do this job on day one”.

He envisioned a Biden, Harris administration that will help families struggling economically from the coronavirus pandemic.

“Kamala and I both know that all folks are looking for, as my dad would say, is an even shot…it will be work the of our administration to make sure they get a fair shot,” he said.

“Kamala Harris has had your back, and now we need to have her back,” he said. 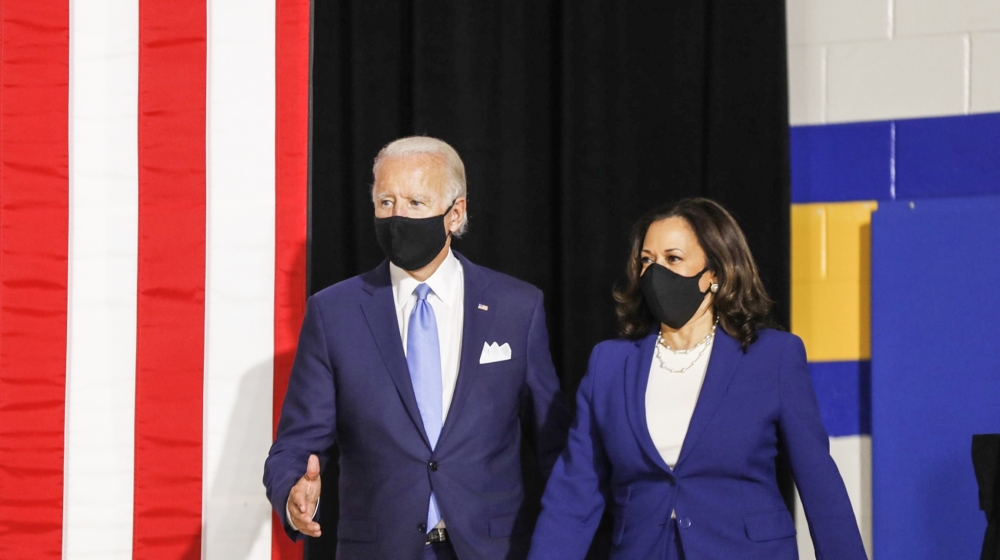 He called it a “life changing election for this nation”.

The choice we make this November is going to decide the future of america for a very long time,” he said.

“I have no doubt that I picked the right person to join me as the next Vice president of the United States of America,” he said.

Politico reporter Alex Isenstadt has reported that the campaign has distributed Kamala Harris talking points to Trump surrogates ahead of the campaign event which instruct how to portray Harris as “radical”.

The Trump campaign is distributing these Harris talking points to surrogates ahead of her appearance w/Biden (1/2) pic.twitter.com/S4sUzPPnCF

Kamala Harris’s motorcade was seen leaving Joe Biden’s Delaware home shortly before the campaign event on Wednesday, which was held at a nearby high school that was not publicly disclosed.

Sen. @KamalaHarris’s motorcade rolls out of @JoeBiden’s Delaware home ahead of their first appearance together after he announced her as his running mate. pic.twitter.com/97zUrXiu5G

Nevertheless, a small crowd gathered at Alexis DuPont High School in Wilmington before the event began, according to US media.

Reporters, meanwhile, socially distanced awaiting the remarks in the school’s gymnasium. Reporters had their temperatures taken before entering the gymnasium and wore masks.

The Biden campaign hopes the California senator’s historic profile and confrontational style against Trump will boost Democrats’ efforts to oust the Republican president amid the country’s myriad crises.

Harris was considered a favourite throughout Biden’s search, and she has been a regular surrogate campaigner and fundraiser for him since he became the presumptive nominee.

However, given pandemic restrictions, the 55-year-old former prosecutor will likely have to put her animated and no-nonsense public style – which often contrasts with the 77-year-old Biden’s more folksy approach – to use in television and online streaming formats without voter interaction or feedback.

Supporters also hope she will excel during her only scheduled debate against Vice President Mike Pence on October 7 at the University of Utah in Salt Lake City.

“So, my message to the Democratic candidate for vice president [is]: ‘Congratulations, I’ll see you in Salt Lake City!'” Pence said on Wednesday.

On Wednesday, Biden and Harris started the day by tweeting about the newly formed team.

Biden wrote that if they win, “We’re going to inherit multiple crises, a nation divided, and a world in disarray …That’s exactly why I picked her: She’s ready to lead on day one.”

If @KamalaHarris and I are elected, we’re going to inherit multiple crises, a nation divided, and a world in disarray. We won’t have a minute to waste.

That's exactly why I picked her: She's ready to lead on day one.

Harris, for her part, tweeted a video that showed Biden offering her the position.

“We are in a battle for the soul of this nation. But together, it’s a battle we can win,” she wrote.

We are in a battle for the soul of this nation. But together, it's a battle we can win.@JoeBiden—I'm ready to get to work. pic.twitter.com/3PJcUTYBGU

The duo will have to work through some differences exposed during the primary campaign, including Harris’s initial support for a single-payer health insurance system and the Green New Deal, progressives’ most ambitious set of proposals to combat the climate crisis.

There was also Harris’s deeply personal debate-stage broadside against Biden over his opposition to federally mandated busing to integrate public schools in the 1970s.

Trump has already seized on those dynamics, tagging Harris as “Phony Kamala” and casting her as the latest evidence that Biden, a five-decade veteran of the Democratic establishment, is captive to the farther-left reaches of the party.

On Wednesday, White House adviser Kellyanne Conway on Wednesday insisted Harris is “very much part of the radical left” and suggested the senator will have a hard time not outshining Biden, whose age and fitness for office Conway frequently mocks.

“He’s overshadowed basically by almost everyone he comes in contact with,” she said.

Biden’s campaign seemed prepared for the counteroffensive, noting that just weeks ago, Trump said Harris would be a “fine choice”.  Meanwhile, campaign finance records show that Trump contributed as a private citizen to Harris’s attorney general campaigns in California. Harris was elected to the Senate in 2016. 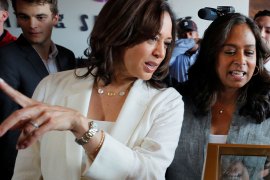 Kamala Harris is influenced by her Indian and Jamaican heritage

‘Historic day for Indian community’, Harris’s uncle cheers from India as US Democrats make appeal to people of colour. 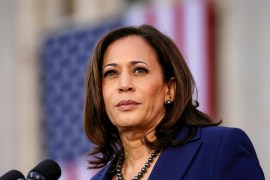 The groups have created a ‘war room’ to refute sexist or false smears of the US Democratic vice presidential candidate. 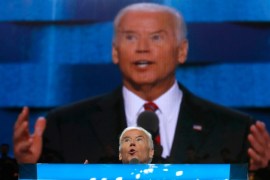