By Timour Azhari
Correction
An earlier version reported Dr Fred Bteich operated on a man shot in the heart. The surgery was performed by another doctor, not Bteich.

Beirut, Lebanon – Enraged over a massive blast in Beirut last week, tens of thousands of protesters took to the streets of the capital on Saturday to call for accountability and the downfall of the country’s ruling class.

A large number of protesters threw stones and other projectiles. They faced tear gas, rubber bullets, and birdshot fired from shotguns.

Through analysis of videos and images of the security response by the army and men in plain-clothes on the day, and examination of medical documents and interviews with doctors who treated the wounded, Al Jazeera established that security forces violated international standards on the use of force.

The United Nations has set basic principles for the use of force which outline that all other non-coercive means must first be exhausted and security forces must “exercise restraint” and “minimize damage and injury”.

Law enforcement agencies are not allowed to use firearms against people “except in self-defence or defence of others against the imminent threat of death or serious injury”, or “to prevent the perpetration of a particularly serious crime involving grave threat to life,” and related situations.

But open-source evidence shows these criteria were likely not met on Saturday.

Shots fired from a distance

Saturday’s protest took place in Martyr’s Square, a long rectangular expanse in downtown Beirut, which has the Mohammad al-Amin Mosque, the tomb of former Prime Minister Rafik Hariri, and a building complex on its eastern side, marked on the map below.

On the other side, soldiers and men in plain-clothes fired a number of different weapons towards protesters. 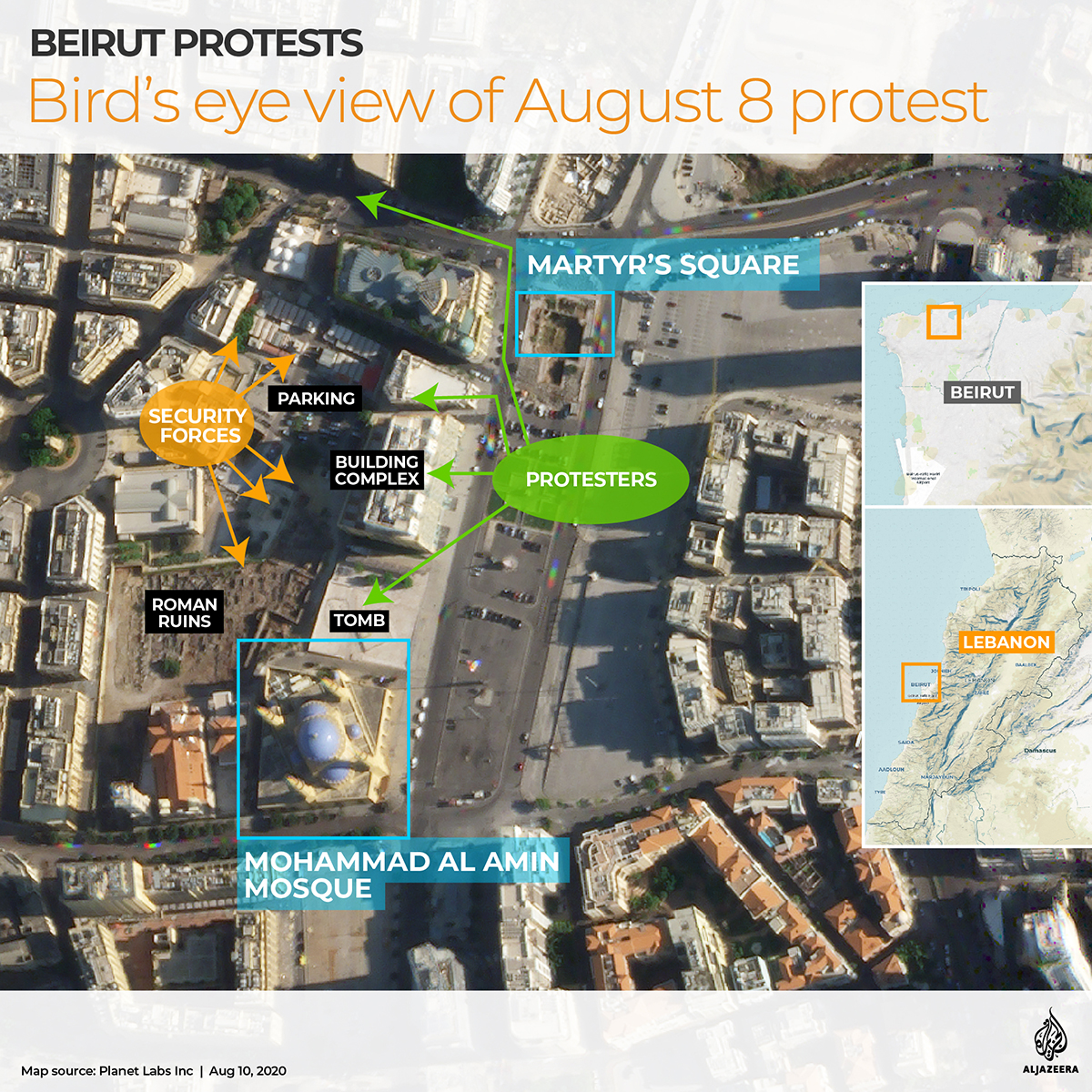 Video showed protesters throwing stones at security forces who were at a distance of about 40 metres (131 feet) across the terrain that they were unable to cross.

Below are four examples of shootings that occurred during the demonstration on August 8, sourced from videos and images either posted online or recorded by Al Jazeera on site.

Plotted on the map below, the four shootings occurred close to each other, with the orange lines indicating the approximate distance between security forces and the closest protesters. 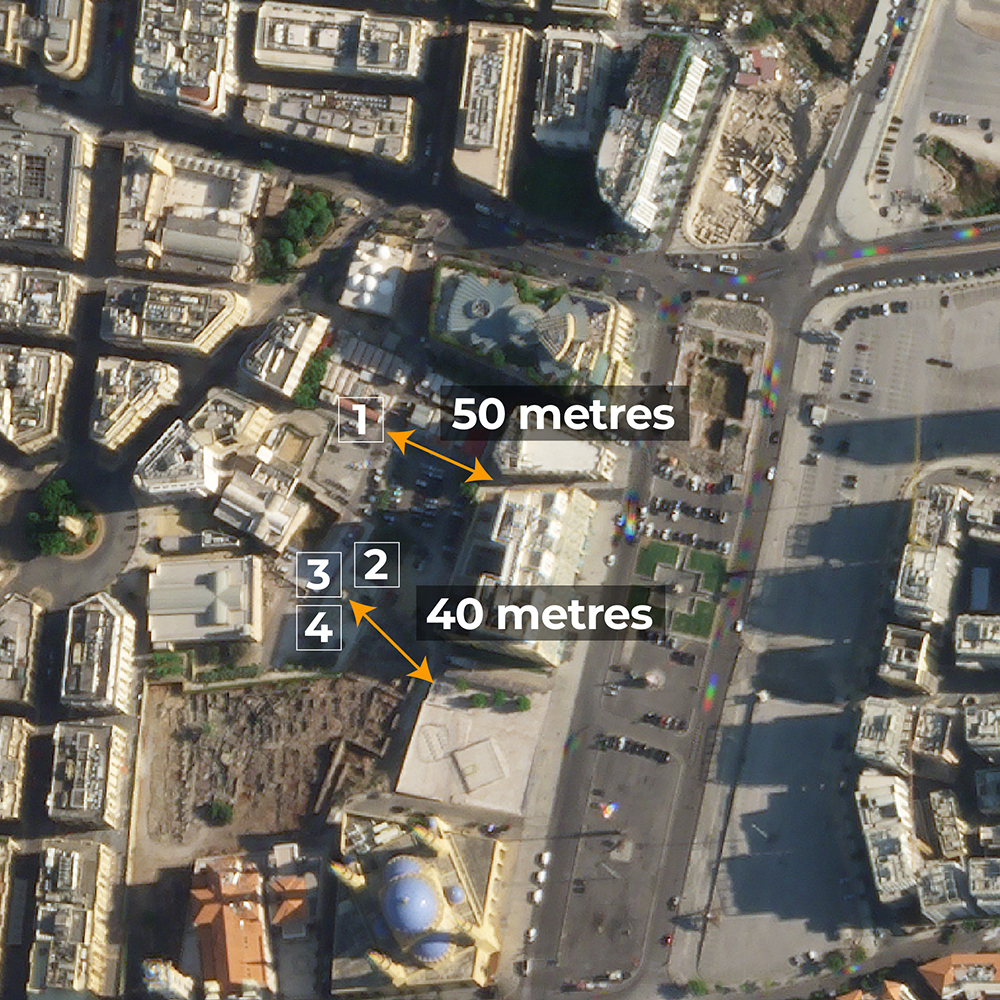 This shows that armed men in civilian clothes and a soldier shot at protesters at a minimum distance of 40-50 meters (131-164 feet) away, raising serious doubts over whether it was a legitimate use of force under UN guidelines.

He said the large distance between protesters and security forces “reduces the chance that the use of force was necessary recourse, that it was lawful recourse”.

Asked about the use of a pistol and birdshot, Weir said: “Nothing I saw on Saturday suggests that potentially lethal force by security forces would have been warranted.”

The Internal Security Forces (ISF) denied in a statement that they fired any rubber bullets at protesters and said a man who appeared in a video shooting live fire was not a member of the force.

The army also said they had not used live fire, though they did not deny using rubber bullets.

Army and ISF spokespeople could not be reached for comment on who the men in plain-clothes were.

Apart from the army and the ISF, parliament police are stationed in that area. They are under the direct authority of Parliament Speaker Nabih Berri, and have been documented assaulting protesters on numerous occasions in the past.

A spokesperson for General Adnan Sheikh Ali, the head of the parliament police, said he declined to comment on the matter.

Use of force is placed under serious restrictions for good reason – it often leads to debilitating injuries and death.

At least 728 people were injured during Saturday’s protest, including many receiving wounds to head, neck and chest. Wounds were consistent with both rubber bullets and birdshot.

Two doctors who treated protesters wounded with birdshot told Al Jazeera they had seen wounds consistent with both close-range and long-distance fire.

Fred Bteich, a surgeon at Beirut’s Hotel Dieu Hospital, said one man was shot from a maximum distance of 15 metres (49 feet). He said one of the pellets entered the right side of the 33-year-old man’s heart, missing a major artery by 1cm (0.4 inches).

“If it hit that he would have died on the spot,” Dr Bteich said.

Due to the sensitive location of the pellet, surgeons were unable to remove it from the man’s heart. This has the potential to cause complications in the future, Bteich said.

“We can’t afford for it to change position a lot because it would be catastrophic inside the heart.”

The same man was also hit by a rubber bullet fired at close range, which logged inside his body and had to be surgically removed.

Both Bteich and Dr Ghassan Chakhtoura, a gastrointestinal surgeon at Hotel Dieu, said four or five patients had been treated for birdshot injuries at that one hospital alone.

Chaktoura said those treated included a 22-year-old man and a 55-year-old woman. The first had several pellets lodged in his body, with one piercing his spleen, kidney and lodging near his back. His condition was stable.

The woman, however, was shot in the stomach and pancreas and was in unstable condition, requiring emergency surgery.

One patient was brought in with at least 50 pellets spread across his body.

Chakhtoura said his colleague Dr Elie Saliba had been shot in the head at Saturday’s protests after working long shifts to save victims of the Beirut explosion.

Chakhtoura also noted a number of people had come in with more superficial wounds, consistent with birdshot fired from a farther distance away.

Bteich and Chakhtoura spoke of a number of other cases at area hospitals. They said it was the first time they had seen protesters brought in with birdshot wounds despite working at the hospital since a massive protest movement began in October.

“It’s completely unacceptable for Lebanese security forces – be it the Lebanese Army, Internal Security Forces or parliament police – to be using birdshot against protesters,” Weir said.

“It’s not designed for that in any way, shape or form. It’s designed for sport, shooting clay pigeons and killing small animals,” he said.

“It is not designed to be used for crowd control and it poses a serious risk of injury or death, which Human Rights Watch has documented in the past.”