The United States Supreme Court has ruled that much of Eastern Oklahoma is tribal lands in a landmark decision that overturned a tribe member’s rape conviction because, they determined, it technically occurred outside the reach of state criminal law.

The justices ruled five to four in favour of the man, named Jimcy McGirt, and agreed that the site of the rape should have been recognised as part of a reservation based on the historical claim of the Muscogee (Creek) Nation, and was thus beyond the jurisdiction of state authorities.

“Today we are asked whether the land these treaties promised remains an Indian reservation for purposes of federal criminal law. Because Congress has not said otherwise, we hold the government to its word,” Justice Gorsuch wrote in the majority opinion

McGirt was convicted in an Oklahoma state court of sexual assault and rape of a four-year-old child in 1996. He does not dispute his guilt, but had argued the court did not have jurisdiction to convict him, as the crime occurred on Muscogee (Creek) tribal lands. McGirt is a member of the Seminole tribe.

Federal law states when a crime is committed on a Native American reservation they must be tried in federal courts. However, Oklahoma argued much of the Muscogee (Creek) Nation territory was dissolved when Oklahoma was given statehood in 1907.

Oklahoma and the administration of President Donald Trump argued there was never a reservation and relied on historical evidence to make its case.

The Supreme Court siding with McGirt meant that an area home to 1.8 million people, including the entire city of Tulsa and its population of 400,000, would be a Native American reservation.

Tribe members who live within the boundaries are now set to become exempt from certain state obligations such as paying state taxes, while certain Native Americans found guilty in state courts may be able to challenge their convictions on jurisdictional grounds. The tribe also may obtain more power to regulate alcohol sales and expand casino gambling.

The ruling could also affect the other four of the Five Civilized Tribes in Oklahoma: the Cherokee, Chickasaw, Choctaw and Seminole tribes.

“The federal government promised the [Muscogee (Creek) Nation] a reservation in perpetuity,” Gorsuch continued in the majority opinion.

“As a result, many of the arguments before us today follow a sadly familiar pattern. Yes, promises were made, but the price of keeping them has become too great, so now we should just cast a blind eye. We reject that thinking.”

Justices heard arguments on the case on May 11.

Some justices expressed concern over the broad implications such a designation would mean for the state. Justice Sonia Sotomayor said any problems would be “easily fixable by Congress”.

Justice Ruth Bader Ginsburg observed that what made the case “difficult” was that designating much of Eastern Oklahoma as tribal lands would undo “hundreds” of similar cases.

Ian Gershengorn, the lawyer arguing on behalf of McGirt, said while there are concerns over the undoing of prosecutions, Oklahoma had not provided firm numbers on how many prosecutions could be challenged.

This concern still would not have undone McGirt’s challenge, he added, which hinges on the existence of a Muscogee (Creek) reservation in Oklahoma.

During arguments, his questions caused observers to think he was leaning towards siding with the Muscogee (Creek) Creek tribe, questioning why Oklahoma relied on historical evidence.

“I guess I’m struggling to think why that should be relevant in an interpretation of statutes from the last century,” Gorsuch said, going on to acknowledge that “states have violated Native American rights”, at times.

The case has roots in an historical event known as the “Trail of Tears”, the forced march of roughly 60,000 Native Americans from their ancestral homes to lands designated “Indian Territory” by Congress in the 1830s.

Five tribes, including the Creek, Cherokee, Choctaw, Chickasaw and Seminole, were forcibly removed, with the support of former President Andrew Jackson. The move killed between 2,500-6,000 Native Americans.

A similar case appeared before the court last year, involving a Muscogee (Creek) Nation member convicted of murder. The case was also argued by Gershengorn.

Gorsuch recused himself and the court failed to issue a ruling. This suggests the court was deadlocked 4-4. 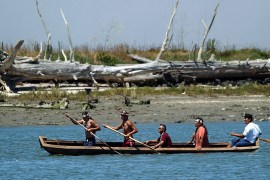 Most of an island off northern California will again belong to the Wiyot Tribe, which was decimated by settlers in 1860. 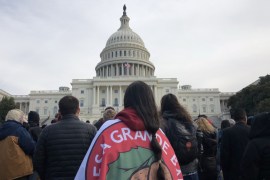 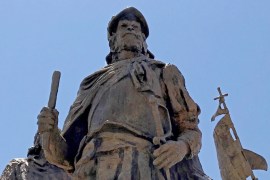 Demonstrators calling for the removal of Juan de Onate’s image from Albuquerque faced violence, according to reports.