Since October, US diplomats and troops across Iraq have been targeted by about three dozen rocket attacks that Washington has blamed on pro-Iranian armed factions.

In the first move of its kind, elite Iraqi troops in late June arrested more than a dozen Tehran-backed fighters who were allegedly planning a new attack on Baghdad’s Green Zone, home to the United States and other foreign embassies.

Iraqi government officials said the raid would serve as a “message” to deter future attacks, but late on Saturday more attacks were launched.

One rocket fired at the Green Zone landed near a home, wounding a child, according to the Iraqi military.

The rocket was launched from the Ali al-Saleh area of Baghdad and landed next to a house close to a local TV channel, a military statement said. The child suffered head injuries and the house was damaged.

“At the same time, our forces were able to thwart another attack and seize a Katyusha rocket and launcher that were targeting the Taji base north of Baghdad,” where US-led coalition troops are based, it added.

In March, two Americans and one British soldier were killed following a barrage of rockets on Camp Taji.

The latest uptick in attacks comes shortly before Iraq embarks on strategic talks with the US, in which the presence of American forces in the country is expected to top the agenda.

The attempts came just hours after the US embassy tested a new rocket defence system known as a C-RAM, according to a senior Iraqi security source.

The C-RAM, set up earlier this year at the embassy, scans for incoming projectiles and explodes them in the air with thousands of rounds fired per minute.

A series of muted blasts could be heard across Baghdad on Saturday night as the system was apparently tested, leaving passersby confused and Iraq’s parliament outraged.

Deputy Speaker Hassan al-Kaabi slammed the trial as “provocative” and “unacceptable” as it could put residential areas in danger.

Al-Kaabi called on the government to take action against the “illegal” move that would “provoke the Iraqi people”, according to a statement.

There was no immediate comment from the US embassy on whether the system was used against the rocket overnight.

Iraq has long been caught in a tug-of-war between its two main allies, Iran and the United States – arch-enemies whose relations have further crumbled since Washington pulled out of a landmark nuclear deal with Tehran in 2018.

Baghdad carefully balances its ties with the two countries, but the repeated rocket fire risks rocking its tightrope.

The US blames the attacks on Kataib Hezbollah, a Tehran-backed faction within Iraq’s state-sponsored network of armed units known as the Hashd al-Shaabi (the Popular Mobilisation Forces or PMF).

Washington has demanded Iraqi authorities be tougher on the group. Local forces had long hesitated, fearing direct action against such a powerful actor would risk broader confrontations.

But last month, state security forces carried out the first raid of its kind against a Kataib Hezbollah base on the edge of Baghdad, seizing rockets and arresting 14 fighters allegedly planning an attack on the Green Zone.

The move was hailed by US Secretary of State Mike Pompeo who said armed groups are “the single biggest obstacle to additional assistance or economic investment” for Iraq.

But within days, all but one of the fighters were released and some were seen burning US and Israeli flags and stepping on pictures of Iraqi Prime Minister Mustafa al-Kadhimi.

Al-Kadhimi has repeatedly promised to put an end to the missile fire and the continued attacks are seen as a challenge to his authority.

‘Agent of the Americans’

Kataib Hezbollah is deeply suspicious of al-Kadhimi, accusing him of complicity in the US killing of Iranian General Qassem Soleimani and Hashd’s deputy chief in a January drone attack in Baghdad.

“The prime minister has totally failed and he has to understand if he relies on the Americans rather than the Iraqi people, he will fail,” Mohammed Mohie, a spokesman for Kataib Hezbollah, told Al Jazeera.

“If he continues this way he will show his cards as an agent of the Americans and that he serves the Americans more than his homeland.”

According to paramilitary expert Michael Knights, it is the top armed Iraqi ally of Iran’s Revolutionary Guard Corps, which Washington has designated a “terrorist” group.

Al Jazeera gained exclusive access to one of its military bases in southern Baghdad after it was raided by Iraq’s counterterrorism forces.

Kataib Hezbollah’s members said the raid was illegal as it was carried out without an arrest warrant.

“If they have evidence for this allegation they can show it to the people, but here there are no missiles and launching pads,” one member said on condition of anonymity.

“This base has been here since 2015 and we have a formal letter from Baghdad Operations Command. This base is used for logistical support.” 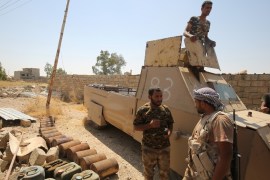 Nearly six months after the US assassinated IRGC General Soleimani, Tehran is losing its grip on armed groups in Iraq. 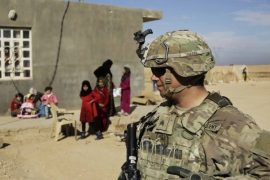 Iraq and the US withdrawal conundrum

Disagreement in Baghdad over the presence of US troops threatens to destabilise the country. 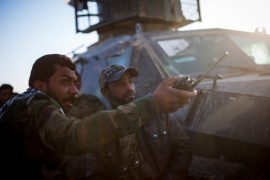 At least 10 members of the paramilitary unit also known as the Popular Mobilisation Forces were killed.