Algeria buried the remains of 24 resistance fighters returned from Paris after more than a century and a half as it marked the 58th anniversary of its independence from France.

The skulls of the fighters – shot and decapitated in the early years of the French occupation – were laid to rest on Sunday during an emotional ceremony at El Alia cemetery.

Coffins draped with the national flag were lowered into freshly dug graves in the Martyr’s Square of Algeria’s largest burial ground, alongside national heroes such as top revolt leader Emir Abdelkader.

An elite unit of the Republican Guard presented arms while a funeral march played in the background, an AFP news agency correspondent reported.

The skulls, once viewed as war trophies by French colonial officers, were flown into Algiers international airport on Friday and then moved to the Palace of Culture where they were placed on display.

The return of the skulls was the result of years of efforts by Algerian historians, and comes amid a growing global reckoning with the legacy of colonialism.

President Abdelmadjid Tebboune, who took part in the ceremony, on Saturday said it was time to turn a page on years of frosty relations with France, calling on Paris to apologise for its colonial past.

“We have already had half-apologies. The next step is needed … we await it,” he told news channel France 24 in an interview. 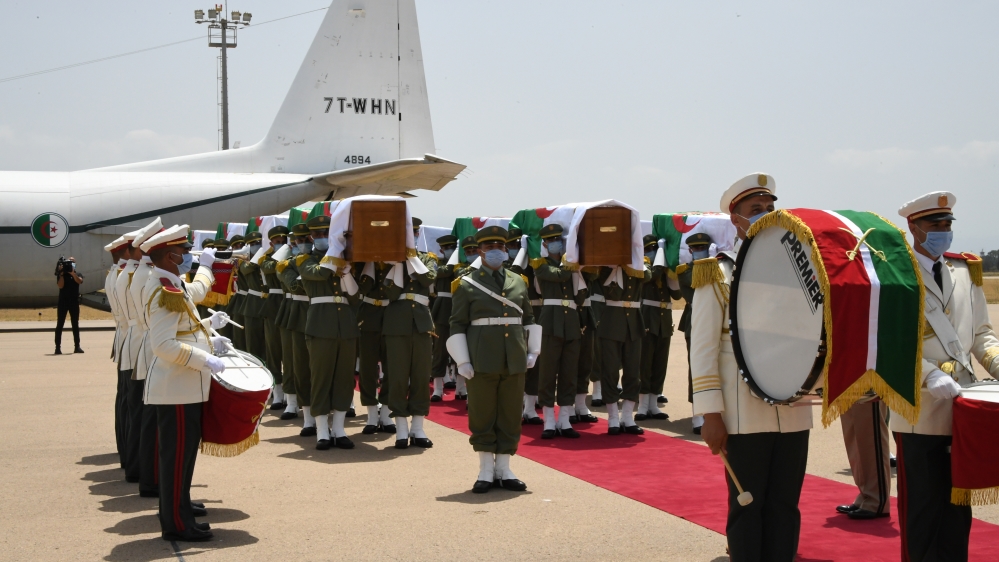 An apology was necessary to “face the problem of memory that jeopardises many things in the relations between the two countries”, Tebboune said.

It would “make it possible to cool tensions and create a calmer atmosphere for economic and cultural relations”, especially for the more than six million Algerians who live in France, he added.

Despite stifling heat, a long queue formed outside the palace and some men and women, waiting to pay their respects, wept, according to footage broadcast by several television stations.

“I came as a fighter, as an invalid from the war of liberation, as a citizen who loves his country,” said Ali Zemlat.

The 24 fought French colonial forces who occupied Algeria in 1830 and took part in an 1849 revolt. After they were decapitated, their skulls were taken to France as trophies.

In 2011, Algerian historian and researcher Ali Farid Belkadi discovered the skulls at the Museum of Man in Paris, across from the Eiffel Tower, and alerted Algerian authorities.

The researcher lobbied for years for their return and Algeria‘s then-President Abdelaziz Bouteflika, eventually launched the formal repatriation request.

French President Emmanuel Macron agreed to the repatriation in 2018 but bureaucratic obstacles resulted in the delay of their return.

“We have recovered part of our memory,” historian Mohamed el-Korso told The Associated Press news agency. “But the fight must continue until the recovery of all the remains of the resistance fighters, which number in the hundreds, and the archives of our revolution.“