The United States marked a subdued Fourth of July holiday with social distancing and restrictions on crowds preventing the typical gatherings and firework displays amid a surge in coronavirus infections in southern and western states.

Racial justice protests were also planned in the US capital on Saturday, where President Donald Trump is set to deliver a speech on the National Mall.

Trump promised a “special evening” that could bring tens of thousands of spectators, despite warnings of the dangers of spreading the virus from Washington, DC Mayor Muriel Bowser, who is powerless over the event on federal land.

Saturday’s commemoration of the declaration of US independence from Britain began on a grim note, with both Florida and Texas recording their highest daily new infections, 11,458 and 8,258 in a 24-hour period, respectively, since the coronavirus outbreak began in the United States.

To date, nearly 130,000 people have died from COVID-19 in the country, amid 2.8 million infections – the highest number of both deaths and infections in the world.

Beaches, normally packed over the holiday weekend, were widely shut on both coasts with Florida’s most populous county Miami-Dade shuttering the sand and imposing a curfew for residents.

Meanwhile in California, beach closures went from Los Angeles County northward through Ventura and Santa Barbara. To the south in Orange County, hugely popular beaches such as Huntington and Newport were closed.

The Centers for Disease Control and Prevention cautioned that mass gatherings, such as the one scheduled by the president, present a high risk for spread of the virus.

On Friday during Trump’s speech at Mount Rushmore, Republican Governor Kristi Noem, an ally of the president, insisted social distancing was not necessary and masks were optional.

On Saturday, officials said they would hand out 300,000 face coverings to spectators who gather on the National Mall. While Interior Department Secretary David Bernhardt said visitors would be encouraged to wear masks and keep two metre (6 foot) distance from one another, there was no indication that would be mandatory.

In a patchwork of restrictions across the country, parades were cancelled, boisterous backyard barbecues scaled down, and family reunions put off amid worries about air travel and concerns about spreading the virus.

In New York City, the famous annual Nathan’s hotdog eating contest, normally held on the crowded Coney Island boardwalk, took place inside with no spectators and special precautions for officials and workers.

Meanwhile, Fireworks displays, a mainstay of the holiday that typically attracts crowds of thousands to locations across the country, have been put on hold this year, with an estimated 80 percent of those events cancelled.

Other locales urged people to watch the displays from their cars.

Saturday also comes amid a backdrop of heightened racial unrest in the country following the killing of George Floyd after a white police officer kneeled on his neck for nearly nine minutes in Minnesota on May 25.

Demonstrations have since become a regular feature in many American cities, with several planned in the US capital.

The largest protests on Saturday are expected to include a George Floyd memorial March beginning at the Lincoln Memorial, a Black Out March at the US Capitol, and a Black Lives Matter protest at the National Museum of African American History and Culture.

Public health officials have been bracing for a new spike in coronavirus cases after this weekend’s celebrations and protests. 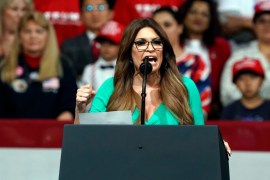 Guilfoyle, who is also the girlfriend of Trump’s eldest son, was tested before the president’s Mount Rushmore speech. 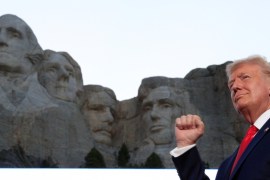 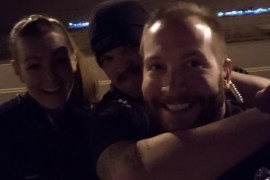 US officers fired over photos imitating chokehold on Black man