Kuala Lumpur, Malaysia – Former Malaysian Prime Minister Najib Razak has been found guilty of corruption in the first of several cases linked to the alleged theft of billions of dollars from state fund 1MDB, becoming the first Malaysian leader to be convicted of graft.

The verdict on Tuesday relates to Najib’s role in diverting an estimated 42 million ringgit ($9.88m) from SRC International, a unit of 1MDB, into his personal bank accounts.

“I find that the prosecution has successfully proven its case beyond a reasonable doubt. I therefore find the accused guilty and convict the accused on all seven charges,” Judge Mohamad Nazlan Ghazali said, referring to the allegations of abuse of power, several counts of money laundering and criminal breach of trust filed against Najib.

The Kuala Lumpur High Court is expected to deliver a sentence later on Tuesday.

Najib faces decades in jail, as well as hefty fines, following his conviction. Although the charges also carry a sentence of whipping, the former prime minister, who is 67 years old, is likely to be spared the cane given his age.

Reading the verdict, Judge Nazlan said Najib, who also held the post of finance minister, “acted outside the limits of the permissible conduct” in the approval of loans, which later became a source of funds transferred to his account.

He said Najib “benefitted” from the approval of the loans, and that the defence had failed to raise reasonable doubt over the offence of abuse of power – the first of the seven charges.

The convictions come just six days after the high court ordered Najib to pay the government as much as 1.69 billion ringgit ($400m) in unpaid taxes and penalties, covering the years from 2011 to 2017.

Ahead of Tuesday’s verdict, hundreds of Najib’s supporters gathered outside the court to show their backing for the embattled politician, who was once considered the country’s most powerful man.

As news of the convictions rippled through the crowd, they condemned the judge’s verdict as “political vengeance”.

Several of his supporters waiting outside shouted, “Long live my boss”, as some of them openly cried upon hearing the outcome.

The conviction was quickly trending across social media, where many welcomed the judge’s decision.

Tony Pua, an opposition legislator who played a key role in exposing the scandal at 1MDB, welcomed the decision on SRC.

“After months of depressing news when the mandate of the people in 2018 was robbed by those who betrayed their trust, today, Malaysians look to celebrate as the judiciary demonstrates its teeth and impartiality,” Pua told Al Jazeera.

“It’s not over yet, but it’s a big, big step in the right direction.”

Political analyst Bridget Welsh said that, for many, the verdict represented a “New Malaysia day” where calls against abuses of power had been heard, and while there was likely to be a long process of appeals, the ruling “closes the door on Najib’s comeback”.

In court, as the judge said he wanted to proceed with sentencing, the defence team pushed for a delay until Monday.

When court resumed in the afternoon, Datuk V Sithambaram, the lead prosecutor in the case, called for a sentence that serves “as a precedent for all in public office that no one is above the law”.

Najib took the dock to defend himself, insisting that he was not aware of the SRC payment into his bank accounts.

The United States Department of Justice alleges $4.5bn in government money had been drained from 1MDB during Najib’s time as prime minister.

Prosecutors say Najib played a direct role and gave instructions to deposit money into his bank accounts, which was later used for political funding, the purchase of luxury goods and renovations on his property.

Najib pleaded not guilty to the charges at the start of the trial in April 2019. In December, he took the witness stand to defend himself – a first for a former leader of the country.

The former prime minister’s lead defence lawyer, Muhammad Shafee Abdullah, had argued that Najib was “not part of the conspiracy” to the defraud the government, laying the blame on party-loving fugitive Malaysian financier Jho Low.

On Monday night, Najib wrote on Facebook that he would appeal any guilty conviction. Appeals can go as high as the country’s top court.

The second and biggest case covers several charges, including 21 counts of money laundering involving $550m directly from 1MDB, while the third case, which started on November 18, relates to an alleged abuse of power and the cover-up of an audit report at 1MDB. Two more trials are pending.

The scandal at 1MDB fuelled mass protests and led to the downfall of Najib’s government in May 2018.

Najib has remained free on bail despite the charges against him, criticising the policies of his former mentor, Mahathir Mohamad and the coalition that replaced him.

Mahathir himself was forced to leave the job in March this year, after a group of disgruntled former members of his coalition, backed by Najib’s party, UMNO, pledged their support for the current Prime Minister Muhyiddin Yassin. 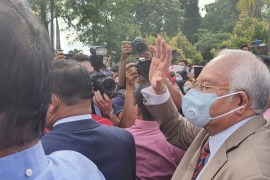 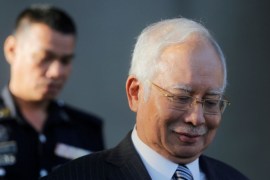 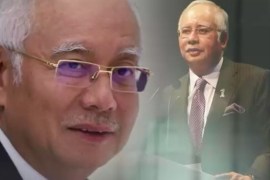 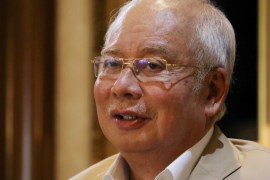